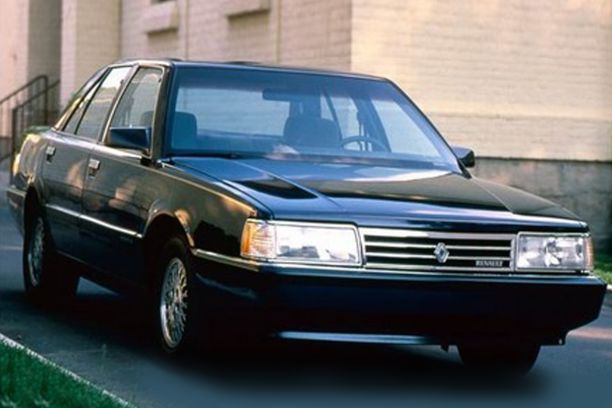 Designed as the spearhead of the American range, the Renault Premier is based on an R21 base stretched at the ends. A very fashionable recipe in the 1960s/1970s (the R8 and R10 bear witness to this), but which no longer worked at the end of the 1980s.

To establish its American offensive, Renault offers a luxury sedan called Premier. But the adventure is cut short for multiple reasons.

Like many European manufacturers, Renault, in its desire to expand, set out to conquer America. Its offensive is multiple, and from 1976 the Renault 5, renamed Renault Le Car, arrives in the land of Uncle Sam.

In the aftermath, the Renault 9 and Renault 11 adapt somehow to local requirements. Above, the Renault 21 temporarily caps the range. But, across the Atlantic, these sedans frenchies necessarily seem small, and therefore not very suitable. A real top of the range with a format worthy of the name quickly becomes essential to give credibility to the manufacturer’s approach.

The brand then goes into overdrive. Robert Opron, the style director at the time, set up a design studio in California in the offices of his partner AMC (American Motors Corporation) in order to be able to smell local trends and effectively seduce the American public. And, to put all the chances on his side, an alternative is considered. Italdesign, the prestigious pharmacy of Giorgetto Giugiaro in Turin, Italy, is also working on the project. A European-Latin influence that could also convince with its exclusive touch.

The style of the car, which is not yet called Renault Premier, is a patchwork in which Italdesign has recycled a Renault 25 central cell by exaggerating the front and rear overhangs, which increases the length at 4.84m. For the record, a Renault 25 has a gauge of 4.62 m. The whole remains nevertheless quite fluid, and the Cd of 0.31 is effective. On board, to make the American customer feel good, the Californian team is at work, imposing a massive dashboard and soft seats. A special factory rises from the ground in Bramalea, in the province of Ontario, Canada. However, to limit production costs, the technical platform of the Renault Premier is that of the R21, slightly enlarged, while the doors are stolen from the R21 and R25. This can be misleading, except on the full profile. Under the hood, two engines are considered. As a spearhead, the V6 PRV 3.0 l engine delivers 150 hp. It is logically associated with an automatic gearbox supplied by the German specialist ZF. This coupling is the prerogative of the Renault Premier ES. The heart of the range, called LX, is limited to a 2.5 l four-cylinder block supplied by AMC. The vehicle was presented at the Detroit NAIAS Motor Show in January 1987.

Renault, then Eagle, then Dodge

On paper, everything started under the best auspices. However, the Renault Premier project will quickly turn into a fiasco. On November 17, 1986, Georges Besse, the head of the Régie, was assassinated in front of his Parisian home by members of Direct Action. His successor, Raymond Lévy, who initially had to deal with poor commercial results in Europe, immediately stopped the American adventure in order to straighten out the company’s finances by concentrating his efforts on the Old Continent. In March 1987, the AMC-Renault subsidiary was sold to Chrysler, which quickly got rid of the AMC brand. Finally, only 200 copies of the Renault Premier will be assembled. The car will continue its journey under the Eagle brand, then at Dodge, where it will take the name Monaco from 1989 and will remain in the catalog until 1992.