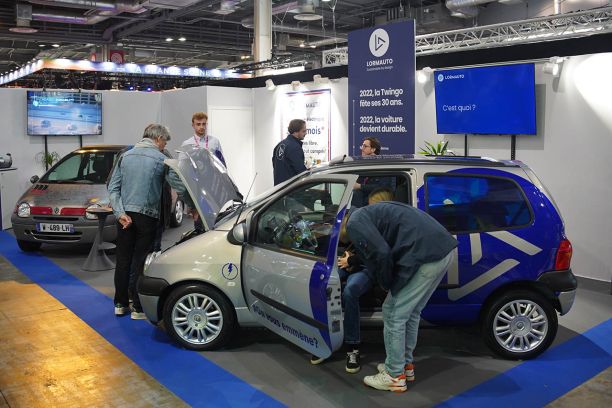 In 1992, Renault presented the Twingo at the Paris Motor Show. Thirty years later, the frog is back. The stand of the Lormauto company made it its muse to promote a retrofit solution that goes beyond the simple integration of an electric motor and a battery. Explanations.

At the Paris Motor Show, The argus met several inspiring small businesses such as La Bagnole de Kilow. A few meters from the productions of the young French manufacturer, a stand displays two first-generation Twingos. They have been reviewed and corrected by the Norman company Lormauto, born during the first confinement.

Electric and above all durable Twingos

The 30-year-old city cars on the company’s stand are 100% electric. However, Lormauto is not a retrofit specialist, this operation consisting of replacing a combustion engine with an electric motor. ” If you buy a slightly tired car to put an electric motor in it, you leave with a slightly tired but electric car. We don’t want that explains Sébastien Rolo, president of Lormauto, met at the Paris Motor Show.

The concept of the company goes further, it is part of the long term. The three founders of the project want make old cars more accessible and durable giving them a second youth. This involves the electrification of their mechanics, the replacement of suspensions, running gear, brakes and tires (for more resistant rubber), but also through a whole program of modernization of the cabin.

“The scrapyards are full of cars in good condition. We propose to reinvest in an existing object for which we have already paid for the material weight, the energy cost and the cost in euros to give it a new value.“

The neo-constructor, this is how he defines himself, has chosen to work on Twingos fitted with at least an ABS and four airbags. The cars are completely dismantled in a transformation plant and then refitted with a 38 kW Dana electric motor (American origin and made in Italy), as well as four battery modules with a total output of 16 kWh. The latter are installed in the front, in the center and under the rear seat, in place of the tank.

Inside, Lormauto took care of completely redoing the seats (foams and covers) with materials selected for their resistance. The dashboard of the vehicles is the original one, but the plastics have been repainted in black. Only the Commodo or safety-related parts have been kept in their original grey. In its transformation, the Renault city car has been enriched with equipment, such as reversing radars or blind spot detectors. The company will be able to update these solutions in order to always maintain an “up-to-date” vehicle. As for the gearbox, which had become useless, it was replaced by a rotary control transmission developed by Lormauto and a partner. It is made in Périgord. Note that the company and the equipment manufacturer Efi Automotive signed a partnership on the occasion of the World Cup.

” Clinical tests carried out in collaboration with the company Forvia, a French specialist in automotive interiors, have made it possible to target improvements to enhance the attractiveness of this youngtimer”, explains Sébastien Rolo. ” We wanted the perceived quality of our Twingos to be very close to that of current car production he says, referring to off the name of the Dacia Spring.

Innovative solutions to preserve the battery

The iconic central counter has been retained, it still displays data relating to the speed and mileage of the vehicle. Behind the steering wheel appears a new tile relating to the electrical system. Information relating to the autonomy and the state of the battery is communicated by this means to the driver. Eco-driving tips are also provided to optimize the LFP (lithium-iron-phosphate) battery assembled by Lormauto in Normandy.

Among the major innovations offered by the company is the heating system. ” Traditionally, in electric vehicles, the heating is managed by a large energy-consuming resistor which involves heating 4 cubic meters of air “, explains Sébastien Rolo. To consume three or four times less energy, the Twingo has seats heated by radiant panels. Electrical resistors have been placed in the storm doors (at the height of the armrests), as well as at the bottom of the steering column and at the level of the windshield bay.

Rental vehicles at €100 per month

When asked about the price, Sébastien Rolo responds with a rental offer. He explains to us that the cost of the transformations is far too high to offer the vehicle for sale. “Rental is the corollary of sustainability, which is the economic equation of sobriety”, he explains. And to continue: The fact of renting the vehicle to you means that I guarantee its use. I also decide when the model becomes obsolete. So we don’t throw away cars anymore. »

“For us, the real price of this car is 200 € per month, without first rent and without subscription, with unlimited mileage and maintenance included.“

If Lormauto manages to integrate the government’s ecological bonus scheme (the company considers itself a manufacturer and not a retrofit player), the monthly cost could drop to €100. ” This was Mr. Macron’s promise a few months ago “recalls the boss. The Norman company would also like to take advantage of the €2,500 conversion bonus by transforming it into a “non-conversion bonus”, continues Sébastien Rolo. The three partners are currently in negotiations with the Ministry of Ecological Transition. As for the sale, the company is looking for a partner who will take care of the distribution of the Twingo, which caught the eye of the groups By My Car and Emil Frey.

TO READ. Increase in the ecological bonus, social leasing… the announcements of E. Macron

The Twingos developed by Lormauto are currently passing the final certification tests. ” We estimate that we can start producing our cars in early 2023 ”says Sébastien Rolo, whose objective is to manufacture one hundred copies by June. ” We want to learn how to build our cars before launching into industrial production “, he insists. The range will expand according to demand and control of the manufacturing process. ” Our vehicles must be able to do 500,000 km now, since the engine is no longer a factor of obsolescence », explains the co-founder. As for the batteries? Sébastien Rolo specifies that he will replace the technology of his batteries with ” current technology “. And to launch: Me, I’m willing to bet that in the next five years the batteries will be almost immortal. Like his Twingos? Case to follow. In any case, it would be a nice snub to Renault, which would finally be on the way to permanently removing the surname from its catalog.

Mushroom picking: already 60 people poisoned since the beginning of the month