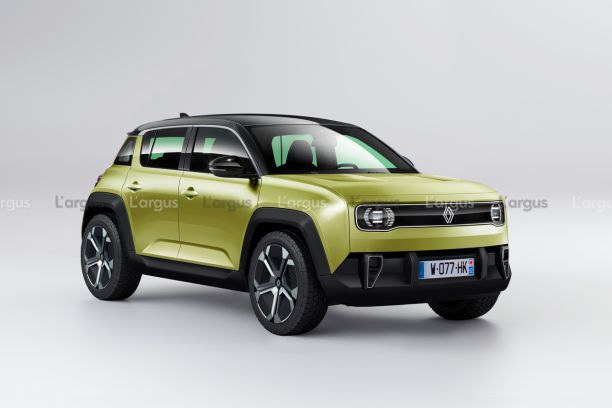 Launched in 2025, the Renault 4 takes the form of an urban SUV, of which here is an illustration produced by us.

Exclusive L’argus. Outlined by the 4Ever Trophy concept, the Renault 4L will rise from its ashes in 2025 in the form of a 100% electric urban SUV, alongside the electric R5 E-tech as well as the Captur. Design, motors, batteries, prices… The argus reveals its latest information.

Bringing icons back to life to renovate the brand, such is Renault’s bet. A winning formula that Fiat and Mini have successfully tested. Others, including Lancia, are in the process of using this recipe. In the summer of 2024, the Diamond firm will launch the long-awaited R5, which will have a version at Alpine the following fall, then will come the R4, which the general public was able to get an idea of ​​by discovering the 4Ever Trophy concept at the Mondial. of the Auto de Paris. With its 4.16 m long, this urban SUV will fit between the R5 / Clio duo and the Captur. The arrival of the R4 and R5 will not condemn the two thermal models which will remain in the catalog. The Clio will be restyled in the spring of 2023 then replaced in 2026. As for the Captur, it will also be restyled in the fall of 2023 and renewed around 2026.

TO READ. The future Renaults until 2027

The spirit of 4L in an SUV

As Renault style boss Gilles Vidal said, the production version will be faithful to this 4Ever concept, at least in its upper part. Our illustrator has warmed up his graphic palette to represent what the Renault 4 of 2025 will be like. Exit Trophy skins and adventurer ground clearance. If the intention is not to redo the city car of the 60s, the overall silhouette takes up the main characteristics: vertical and square front, round headlights, bonnet design, right tailgate… But as Gilles Vidal told us, the rear floor will be specific in order to keep a low loading threshold. It also promises a clever modularity of the seat.

The boss of the style would have seen an electric traction control in the form of a lever on the dashboard: too expensive! On the other hand, a convertible roof with a canvas is under study as well as new paints and customization packs. As for the dashboard, it will be common with that of the R5 and will host a large digital screen facing the driver. Renault will unveil more later in the spring.

The R4 will also technically make common cause with the R5. To reduce costs, Renault has developed a new CMF-B EV platform, derived from that of the Clio, Captur, etc. Under the bonnet will be housed the new “e-PT 100” electric motor produced in the Cléon which will come in two powers. A time planned for 115 hp, it has been recalibrated to 125 hp at the entry level and 150 hp for the higher version. This machine will be powered by a lithium-ion battery (and not LFP) assembled by Envision on a former Renault site in Douai. Here too two variants will be available (approximately 42 and 52 kWh depending on whether we are talking about useful or nominal capacity) with a target of around 420 km for the most powerful. Inaugurated by the R5, the V2G technology (which makes it possible to supply the domestic network thanks to the battery of the vehicle) is also planned on the R4.

If the R5 will be produced in Douai, the R4 will finally come out of the Maubeuge production line. A change justified by the allocation of the future Nissan Micra to the first site mentioned. The launch of the R4 will not take place before spring 2025 for the urban SUV and around the fall for the minivan version. According to our sources, the call price will be around 29,000 € (from €24,000 for the R5), i.e. a price (bonus not included) close to that of a Captur TCe 160 EDC or Hybrid 145 in Intens livery.

TO READ. Does the future 4L SUV appeal to visitors to the Paris Motor Show?