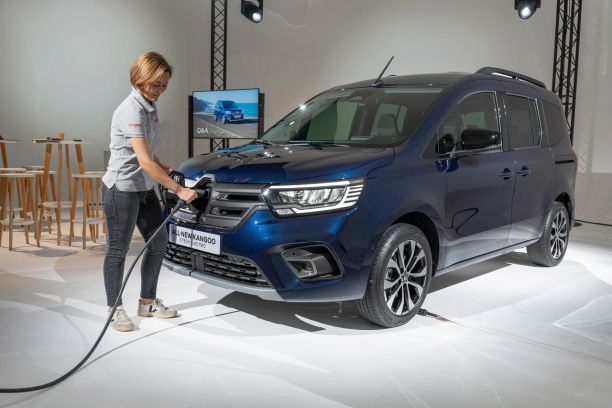 The small world of light utility vehicles (LCVs) and MPVs is electrifying at breakneck speed. The third generation of the Renault Kangoo is no exception. After the van, last spring, the electricity fairy has just looked into the cradle of the version reserved for individuals. What are the novelties brought to the combispace compared to the thermal model? The argus offers you a tour of the owner on the sidelines of the Paris Motor Show, where the vehicle will be officially revealed.

TO READ. All the news from the 2022 Paris Motor Show

A raised and sliding rear seat

Access to the Kangoo’s front seats is facilitated by doors that open to 90°. At the rear, the combispace still benefits from two sliding doors. The opening width reaches 615 mm. Compared to the petrol or diesel models, the electric version requires you to raise your leg more and bend your spine to take a seat on the bench seat. The reason ? The presence of the 45 kWh battery (CATL) under the floor, which forced the engineers to raise the latter by 10 cm.

Aviation tablets are still offered to enhance the trips of the youngest. Many storage spaces have been integrated, particularly at roof level, for a total of 49 l. Like that of the Captur, the glove box takes the form of a sliding drawer. The Kangoo has taken care of its finishes, and its materials have a rather flattering rendering.

All versions receive a 10-inch screen in the middle of the dashboard. It is the same as that of Captur and Arkana. The multimedia system offers a route planning service based on the vehicle’s range and the charging stations available nearby. Counters can be digital, but only on versions equipped with the driving assistant on the highway. The Kangoo E-Tech Electric receives a slew of driving aids (fourteen in total) and can boast of offering a level 2 “autonomous driving” function.

Unlike the engine of the Opel Combo e-Life, Peugeot e-Rifter and Citroën ë-Berlingo, which delivers up to 100 kW (136 hp) and 260 Nm of torque in Sport mode, the Kangoo’s electric unit only develops 90 kW (120 hp) and 245 Nm. A few watts (and newton-metres) less which… promote autonomy! Thus, despite a somewhat smaller battery, the Kangoo outperforms its competitors by 5 km. It would be able to travel 285 km in the mixed cycle or 430 km in urban mode, specifies Renault. This will not fail to be checked by our testing department.

It is possible to optimize the vehicle’s electrical consumption with the Eco driving mode. This limits the power to 56 kW (75 hp) and the maximum speed to 110 km/h. Perfect in town. Brake mode allows you to take advantage of more pronounced braking, without, however, bringing the vehicle to a complete stop.

Two chargers are offered: one of 11 kW (AC), the other optional of 22 kW (AC) combined with one of 80 kW (DC). With the latter, the MPV could recover 170 km in just 30 minutes (compared to 3:50 for the first) on a fast terminal. If you opt for this charger, Renault incorporates a liquid cooling system and electrical resistance to optimize battery charging according to the outside temperature. Still with a view to improving performance, the Kangoo EV is fitted with a heat pump as standard. Heated seats, steering wheel and windshield are available as options.

The Kangoo is the ultimate family vehicle. With its 4.48 m long, the combispace acts as a giant against its competitors (+ 8 cm). Generous dimensions that allow it to position itself as a reference from a trunk volume point of view. Loading capacity fluctuates between 850 and 2,500 l (under the shelf), once the 2/3-1/3 bench seat has been folded down. Access to the hold is by choice, by means of:

The electric Kangoo III, at what price?

Renault has not yet announced the price of the electric Kangoo E-Tech. The order book should open on October 17, simultaneously with the opening of the doors of the 89e edition of the Mondial de Paris, where he will make his first appearance. Deliveries will begin in early 2023.

The third generation of the Kangoo, developed on the CMF-CD platform, has serious advantages. It combines tips to make life easier for occupants with modernized technologies to enhance travel. In addition, the recreational vehicle ” made in Maubeuge is visually upscaled. However, this electric motor is sorely lacking in autonomy to meet the needs of a family in search of escape.