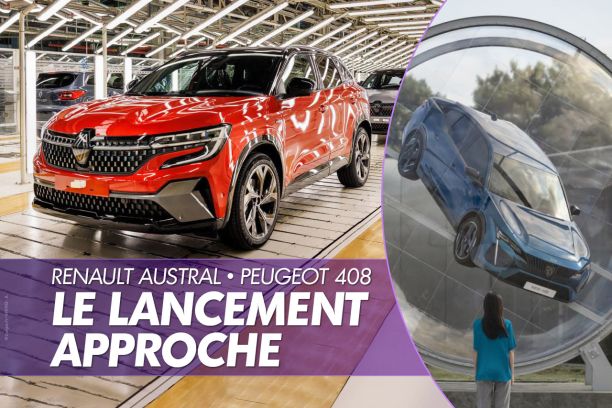 Even if we may have the impression of already knowing them for quite a while, the Renault Austral and Peugeot 408 are still

The Renault Austral and Peugeot 408 are the two French automobile stars of 2022. But it will still take a few weeks to see them arrive in dealerships, even if you may have already come across pre-series examples without any camouflage on the road. this summer.

Between the time a model is unveiled and the time it lands with its first customers, it can sometimes take a long time. Presented in March 2022, the Renault Austral compact SUV will not really be marketed until November. As for the Peugeot 408 crossover, even if you were able to discover it in June, it will be waiting in dealerships until January 2023. During this period, the two French manufacturers did not, however, sit idly by. They are taking advantage of this delay to complete the development of these two important models., without needing to exercise the same discretion as before the disclosure of the first official images. This explains why some of you have already come across Renault Austral and Peugeot 408 without any camouflage this summer, like various members of the French forum Worldscoop.

As for the Diamond SUV, whose production in Spain began in mid-July before taking a break in August, around fifty pre-series copies are already rolling. In addition to real test pilots, the brand’s employees are called upon to track down the slightest problem. Even the engineering boss is on board at the wheel of a 200 hp E-Tech hybrid version. The brand thus hopes to avoid youthful defects, like the air conditioning problem that may have affected a handful of Mégane E-Tech Electrique during rapid recharging. Possible nightingales and assembly approximations are also tracked down. The feedback provided by these more or less amateur testers will make it possible to make some adjustments to the production line if necessary. They can also trigger the implementation of a patch just before delivery when the vehicle has already arrived in the network. The Austral is indeed getting closer and closer to this stage.

The Peugeot 408 also takes care of its copy

For the 408, as we saw above, this deadline is a little further away. But that does not prevent Peugeot from proceeding in the same way as its rival. Even if this crossover, manufactured in Mulhouse and closely derived from the last 308, releases far fewer new elements than the Renault compact SUV, there is no question of spoiling its launch with reliability or manufacturing problems. Especially since we expect to see him charge quite high prices, with its daring silhouette, its generous size or its eight-speed automatic transmission supplied as standard. Pre-series models have therefore taken advantage of the summer holidays to travel the roads in various conditions, in the hands of the brand’s staff.

READ: Behind the scenes of the industrialization of the Peugeot 408

Another test at the Worlds in October

But the challenge will also be to keep the public’s attention during this long period of time. Peugeot has chosen an original way to do it by exhibiting his latest creation in a sphere at the Louvre Lens museum. Renault prefers to multiply press releases to highlight the smallest advantages of its ambitious offspring, from the four-wheel steering to the noise of its palm rest! It has also been officially exhibited in Spain. To discover it in France, on the other hand, it will probably be necessary to wait for the opening of the Mondial de Paris on October 18. The Austral will also find the 408 there and both will have to face another type of test: that of the reactions of the public.