Peugeot Landtrek. The Lion pick-up soon in the Gendarmerie? 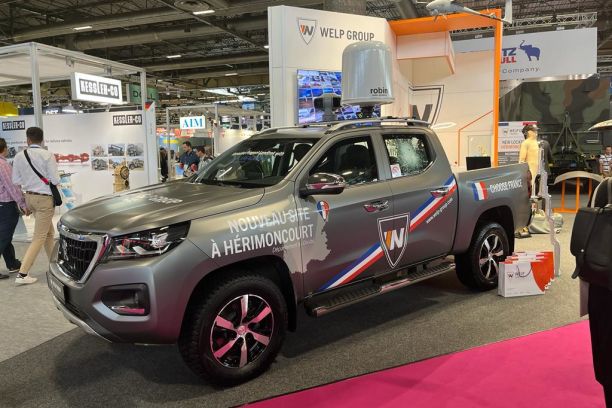 Presented at the Eurosatory show, this armored Peugeot Landtrek prototype was transformed by the German coachbuilder Welp.

While it is not available in Europe, the Landtrek could well end up integrating the ranks of the gendarmerie or the French army. The German coachbuilder Welp has just unveiled an armored prototype of this Peugeot pick-up, which could be transformed in a former PSA factory in Doubs.

Think Peugeot pick-ups are a thing of the past? Think again: in recent years, the brand has made a comeback in this category, which is still very popular in many markets. The argus even offered you, in 2021, a test of the latest Lion in this segment, the Landtrek. While warning you then that it had no chance of being officially marketed in Europe, for lack of engines adapted to our antipollution standards. But finally, this big guy, close cousin of a Chinese model badged Changan, could well land in France by detours. The German bodybuilder Welp, specializing in armor, has just presented a prototype using the base of this pick-up at the Eurosatory exhibition, the “World Defense and Security”.

Armor for military use

With this vehicle, the company wanted to show its know-how in an attempt to attract the various ministries likely to be interested in its services. Even if it already had a certain notoriety, in particular for having taken care of modifying the DS 7 Crossback Elysée used by Emmanuel Macron. The Landtrek would obviously be intended for a completely different use than this presidential SUV. We rather imagine him in the ranks of the army, which today uses Ford Rangers in particular, or in certain highly exposed gendarmerie platoons, such as the GIGN. The prototype exhibited at Eurosatory was also equipped with an anti-drone defense system on the roof, designed by the ESG company. But it is above all its shielding, classified VPAM 7 according to one of the most used standards, that Welp wanted to highlight. On the other hand, neither the company nor Peugeot wanted to tell us which engine was used. The Lion brand simply told us that this copy comes from Tunisia, one of the first markets to have received this pick-up designed primarily for Africa, the Middle East and South America. For now, the Peugeot Landtrek is offered with a 2.4 petrol 210 hp (original Mitsubishi) or a 1.9 diesel 150 hp supplied by a Chinese equipment manufacturer. It will also be offered soon in Argentina with the 2.0 HDi.

A transformation on a former PSA site

The transformation of the Landtrek would be well done in France if the German company manages to win this market. Better still: it is in a former PSA site closed since 2020, in Hérimoncourt in the Doubs, that the adaptations would be made. Welp recently bought part of this factory, with an investment of 8 to 10 million euros spread over several years. Work is currently underway to make the premises operational by the end of 2022, then to deliver the first vehicles next January. Eventually, 80 to 100 employees should be hired. But don’t expect to come across the Peugeot pick-up on every street corner. Only the less restrictive standards permitted by military use should allow it to be driven in France. While Welp will only be able to convert around 10-15 vehicles in 2023 anyway, with modifications possibly taking anywhere from 500 to almost 5,000 hours per car depending on their complexity.

TO READ. Pick-ups, such French know-how

Behind the scenes of the industrialization of the Peugeot 408 crossover

Peugeot 9X8 (2022). The Lion makes its big comeback in Endurance at Monza