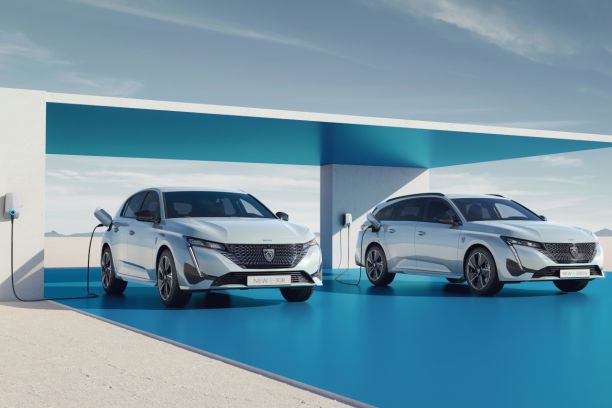 Marketed in mid-2023, the e-308 is the 100% electric version of the Peugeot compact. Its look remains extremely close to that of the thermal variants.

Even if it will not be marketed before spring 2023, the 100% electric version of the Peugeot 308 has already revealed its first official photos. Available in sedan and station wagon, in two trim levels, it introduces a new 156 hp engine and an unprecedented 54 kWh battery.

Added to the program quite late, the 100% electric version of the Peugeot 308 could not land at the same time as the rest of the range. Its production does not begin until the end of 2022, its deliveries will still be expected until spring 2023 and it should skip the next Paris Motor Show. This does not prevent the brand from unveiling the first official photos of this e-308… which, however, hold hardly any surprises.

Apart from new 18-inch rims designed to optimize aerodynamics, the look remains almost identical to that of the thermal versions. Even the grille looks familiar, without taking up the idea of ​​a partially body-coloured grille exploited by the e-208 and e-2008. The dashboard also remains almost unchanged. The main originality of this electric Peugeot 308 is ultimately that it remains available in sedan and SW break, unlike its rivals Renault Mégane e-Tech Electric or Volkswagen ID.3. Only MG competes on both counts with its sedan 4 and its station wagon 5.

TO READ. Restyled Peugeot 208: the electric version produced in Spain

For lack of height under the floor, with its EMP2 platform which was not initially planned for 100% electric, the e-308 could not really hope for better. If this Lioness remains sufficiently armed to face the basic versions of the Mégane E-Tech or MG 4, it will not be able to compete with their high versions, which offer larger battery capacities and much more powerful motors. Recharging also remains fairly conventional, at 400 volts, with a power of 100 kW on a direct current fast terminal. This would make it possible to go from 20 to 80% charge in less than 25 minutes under optimal conditions, failing to allow the compact Peugeot to break records. The standard on-board charger can also provide up to 11 kW of alternating current for those wishing to install a Wallbox at home or in their business. Finally, Peugeot adds a Brake mode to increase regenerative braking, but this does not seem to allow the car to be completely stopped. This e-308 therefore promises to be a 100% electric model that is quite conservative in spirit… which could also be an advantage for some thermal regulars who are still reluctant to adopt this type of engine.

TO READ. News Peugeot: the secret calendar until 2028