Taking at least 10,000 steps a day keeps you in good physical shape. Walking at a brisk pace even reduces the risk of developing long-term diseases, according to researchers. 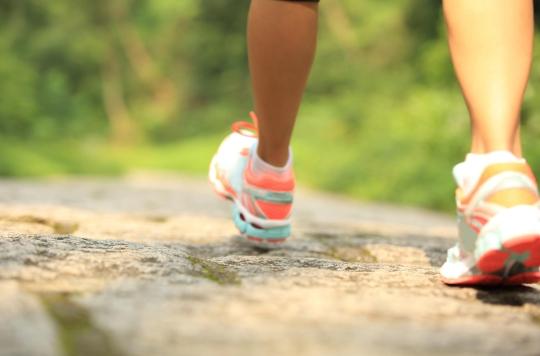 Nearly 95% of French people are at risk of health deterioration due to a lack of physical activity and/or time spent sitting too long, according to the National Food Safety Agency, environment and labor (ANSES).

To fight against a sedentary lifestyle as well as the increase in cardiovascular diseases, it is recommended to practice a cardiorespiratory activity such as walking at least five times a week for 30 minutes. According to a study published in the newspaper jama-network, a more intense walking pace associated with at least 10,000 steps per day could also have many health benefits.

As part of the research, scientists from the University of Sydney (Australia) and the University of Southern Denmark examined step count data from the UK Biobank (from February 2013 to 2015). Nearly 103,684 participants were recruited for this first cohort. The volunteers wore an accelerometer on their wrist to measure their physical activity and step count over a 7-day period.

In 2022, this information was then associated with the participants’ medical records. Only volunteers who were not affected by cardiovascular disease, cancer or dementia in the two years following the first research were included in the new study (78,430 people out of 103,684).

The beneficial effects of running, even for those who walk little

According to the results, walking 10,000 steps a day could reduce the risk of dementia, cancer, cardiovascular disease and death. “The take-home message from this study is that to achieve health benefits, people should not only aim for 10,000 steps per day, but also walk faster,” explained Dr. Matthew Ahmadi, a researcher at the Charles Perkins Center as well as the University of Sydney School of Medicine and Health and lead author of the study.

Running is also said to have health benefits even for people who walk very little. We can read in the study that the risk of dementia was reduced by 25% from 3,800 steps per day. Each slice of 2,000 steps would reduce the risk of premature death by 8 to 11% up to 10,000 daily steps.

“The size and scope of these studies using wrist-worn accelerometers is strong evidence to suggest that 10,000 steps per day is the sweet spot for health benefits and that walking faster is also associated with benefits.”, said Doctor Matthew Ahmadi. Before adding: “Findings from these studies could inform the first official step-based physical activity guidelines and help develop effective public health programs aimed at preventing chronic disease.”

Walking: wearing a pedometer can increase the number of steps per day

Headaches, back pain: 82% of adults suffer from a health problem

Walking: an asset for burning calories and losing weight

Being in better physical shape and more productive: is taking a nap a good idea?

Back to school in great shape

News addiction makes us more anxious and impacts our fitness

Diabetes: two minutes of walking after eating limits the risk!

Walking while using a phone can improve brain performance