Stop dieting: fat is good for your health 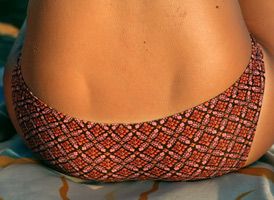 Stop dieting! British researchers believe in a study published Tuesday that plump buttocks, hips wrapped, as well as a little fatty thighs “are signs of good health”.
Building up a store of fat on the hips, thighs and hindquarters ‘is good for you’ and helps protect against diabetes and heart disease, said Dr Konstantinos Manolopoulos, one of the three scientists who conducted the Oxford University study.
On the other hand, having fat around the waist is bad for your health. “Fat on the hips and thighs is good for you but it is bad on the stomach,” said the expert whose study is published in the British journal International Journal of Obesity. Fat around the waist can release harmful acids and molecules called cytokines that cause inflammation into the body, increasing the risk of diabetes and heart disease, the study found.
“The idea that the distribution of fat is important for health has been known for some time … However, it is only very recently that it has been possible to show that fat on the thighs and hips is more large are good for the health», Recalls Dr Manolopoulos. A generous posterior but a flat stomach would be ideal. “Unfortunately, one does not usually go without the other,” admitted the expert.

How do I stop that extreme sweating?