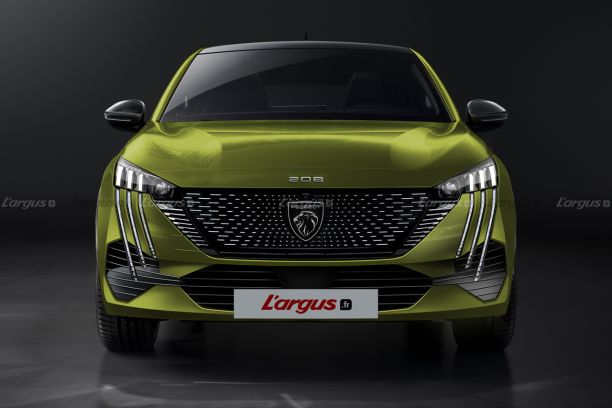 Marketed since autumn 2019, the Peugeot 208 has become the favorite car of the French ahead of the Renault Clio. In 2023, the bestseller will go through the restyling box, benefiting from a new visual identity, signed Mathias Hossann, as well as technical developments.

Since its launch, the Peugeot 208 has been at the top of sales, notably thanks to its advantageous plastic which attracts the eye more than that, more classic, of its rival, the Renault Clio 5. But, internally, the teams are working on the second part. of his career with the goal of staying at the top. Restyling to the economy or in-depth overhaul, the manufacturer chose the second option, which paid off on the 3008. But that’s not the only reason. Following the departure in 2020 of his style boss, Gilles Vidal, from Renault, Carlos Tavares asked his successor, Mathias Hossann, to retouch all future projects from 2023.

Therefore, the restyled 208 and 508 will showcase a new face that will feature three luminous fangs on either side of the grille instead of two. The Peugeot style office thus transposes the six claws (2×3) of the rear lights to the front. Moreover, Mathias Hossann has already given a taste of this new brand on the 9X8 hypercar which will participate in the 24H of Le Mans in 2022 or 2023. It also refers to the daytime running lights of the 508 RXH. Consequently, the design of the shield will necessarily be reviewed in the same way as the grille. The aesthetic changes at the rear will be more subtle while inside, the manufacturer will concentrate its efforts on modernizing the multimedia system and driving aids. The 208 will share that of its big sister, the new 308, especially in terms of the operating system.

New under the hood

Regarding heat engines, the 208 will benefit from the new three-cylinder 1.2 PureTech (EB Gen 3) which will be predisposed for the future Euro 7 emissions standard (2027) and will exchange its so-called wet timing belt for a chain. Also new, the EAT8 automatic transmission supplied by Aisin will be replaced by an electrified dual-clutch transmission (e-DCT) produced by the Punch Powertrain-PSA joint venture. Thanks to the electric machine integrated in the box, the 1.2 PureTech will benefit from a light hybridization in order to lower consumption and CO2 emissions via energy recovery.

As planned in PSA’s strategy, the current 136 hp electric motor produced under license from Continental will be replaced by a new one supplied by Emotors. This joint venture between Nidec and PSA will begin the production of a new range of engines (M2, M3 and M4) from mid-2022 on the Trémery site (near Metz). According to our information, the engine of the e-208 will go from 100 to 105 kW while the CATL battery will benefit from an evolution of its chemistry to offer a slightly increased range. In parallel, the manufacturer had studied for a time the possibility of mounting a less powerful engine shared with the future Citroën C3. A solution that has remained at the study stage. Ditto for the e-208 PSE whose development by Peugeot Sport was stopped in 2021.

The changes are also industrial. Indeed, the city car with the lion will leave the Slovak production site in Trnava. From 2023, the latter will focus on the “Smart cars” program with the respective manufacture of the Citroën C3 (CC21) then the Citroën C3 Aircross (CC24) and Opel Crossland (OV24) SUVs in 2024. Consequently, the Kénitra plant in Morocco will be entrusted with the entire manufacture of thermal versions while the e-208 will join its cousin the Opel Corsa e in Zaragoza in Spain. This move will not be temporary because the future 208 (P31) will be produced there with the Corsa (OV31). The only unknown: will they be multi-energy or 100% electric? The decision is correlated with the success or not of electric vehicles with buyers.

TO READ. The calendar of future Peugeot until 2026

Peugeot 508. Price changes for the sedan and station wagon in 2022

Vauxhall. Top 5 of the most produced models of the Éclair brand