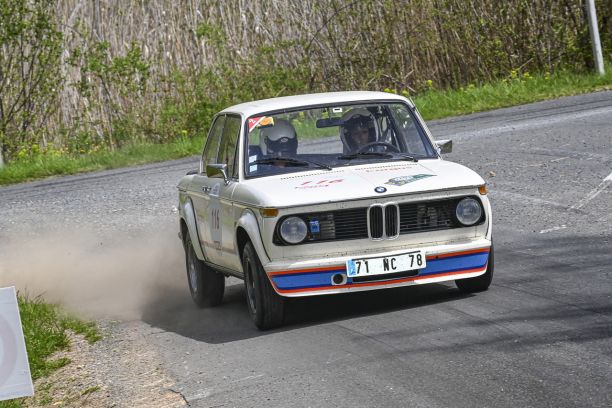 The BMW 2002 Turbo of Géraldine Gaudy and Mathieu Sentis, in action at the Tour Auto 2022.

To reach the Pyrenees from Paris, you can let yourself slide over 800 km of straight motorway. Or meander through La Baule, Limoges, Bordeaux, Pau, and compete along the way against 233 classic cars. At the wheel of a rare BMW 2002 Turbo from 1975, L’argus took part in the Tour Auto 2022.

Monday March 25, 2022, Parc des Expos in Paris. Our BMW 2002 Turbo sits alongside a Ligier JS2, Henri Pescarolo rediscovers his racing BMW 3.0 CSL, Thierry Boutsen poses next to his Shelby Cobra and everything is normal. It is thus in the Pays du Tour Auto which, for 31 editions, has revived the spirit of the Tour de France Automobile born in 1899. Its principle? Connect, via the most beautiful roads in France, timed events on special rally, hill climb or closed circuit in a unique interweaving of different disciplines. The holy grail for all enthusiasts, at the wheel or as a spectator when such rarities grind their V8 (or V12!) on the track before brushing the limit on wide roads like them.

This year, the crew of The argus will be “satisfied” with a four-cylinder. Not the least. In 1973, the BMW 2002 was the first European production car to be equipped with a turbocharger, which transcended the performance of the 2.0 of the 2002 tii: 170 hp instead of 130 hp, 241 Nm of torque instead of 177 Nm , and a 0 to 100 km / h erased in less than 8 s, better than the Porsche 911 of the time. Spirit M, are you there? Yes, answer together the three stripes stickers and the big engine housed in a traditional sedan. If the 2002 Turbo was deprived of the M logo, it is indeed it that still inspires the contemporary M3 and M5…

Despite the exciting technical sheet of our steed, it will be unthinkable to stand up to the aforementioned monsters. But at the Tour Auto, two grids compete: the Competition, which rewards the fastest on the stopwatch, and the Regularity, quieter on paper but no less difficult. Demonstration on the Bugatti circuit of Le Mans, the first timed event of our Tour Auto 2022.

After the visual and auditory fireworks of the Competition field (these BMW M1 Procars really have an exhaust?!), it’s the turn of our Regularity field to set foot on the mythical Bugatti circuit. A route well known to my shock driver, who therefore takes the wheel following a precise protocol: two reconnaissance laps, a reference lap at free pace, then three laps to be completed precisely in the same second. It’s up to me to record intermediate times with a clock in each hand, and tell Geraldine if we are late or early compared to the previous round; it’s up to her to adapt her pace, on a track saturated with other cars with very different performances. At the arrival ? Two small seconds difference over the three laps completed, which places us first equal in our category! A dream start before the first special on the road, which calls for a completely different mental exercise.

This time, we have to cover ten kilometers on a closed road at a given average speed, still without the aid of any electronic device. Thanks to tables of averages prepared in advance, the “copi” shouts to the pilot the distance theoretically covered every ten seconds. It remains to be there precisely, with the relative precision of the original daily counter. At least when it works… Running like clockwork since the start of the rally, our valiant BMW 2002 turbo thus decided to “freeze” its counter at the start of the special. We will therefore advance with a wet finger, without the slightest reference point to know our rhythm after the sinuosities bring our speed back below the 68 km/h to be respected.

Far from bursting into tears, we appreciate this moment of unexpected “vacation” to admire the landscape (pretty), to greet the spectators (surprised), and to tell our lives (exciting) in a moment of usual maximum concentration. The tears finally came laughter provoked by the situation, barely altered by the discovery of the result: 28 seconds difference “only” on the theoretical time, and a place kept in the top 10 of our category. With ten stages and two circuits remaining to be covered before Sunday, anything is possible.

And started the reassembled…

Wednesday, the second day of racing, we opened our eyes to La Baule after a short night. It was less than that of our support team, busy fixing our recalcitrant meter. In vain. This day therefore resembles the first with good results on the circuit (second place in Val de Vienne) but very random times on the road which titillate our souls of competitors… Not so bad: we are working on an alternative solution based on the benchmarks of the road-book, requiring more preparation but promising better results. Bingo. Despite an average time in the last night special before the stage in Limoges (is it lit by candlelight, this 2002?), the tactic pays off the next day thanks to the talent of my ex-driver, who is just as brilliant in the co-pilot role.

Third fastest in the first special, overall victory in the second, first place in the group the following day from Bordeaux: nothing can stop our BMW 2002 turbo which climbs the classifications four by four until reaching the provisional podium. of its category. ” In F1, we elect the driver of the day but in this Tour Auto, you are the crew of the day! », launches Michel Périn, co-driver multiple winner of the Dakar and officiating to the right of Henri Pescarolo on this event.

The maestro’s congratulations go straight to our hearts and confirm the magical parenthesis we are experiencing: meet Ari Vatanen at breakfast before drinking the anecdotes of the great Pescaroloconfessing that he would end up in jail today if he kept the same pace as in 1970 on his Matra 650 at the 24 Hours of Le Mans, especially at night, in the passes, by 0°, to complete the 4,500 km of the event in time, double the editions contemporary. However, we hardly felt like we were dawdling: up to 500 km of small roads from morning to evening, two or three timed events a day, but a fatigue erased by the warm encouragement of the spectators present in every corner, from the early hours of the day (sometimes in a dressing gown) until the last glimmers of the moon (dressed this time). Far from the ambient autophobia that some like to maintain, the Tour Auto rekindles passions, sometimes buried, always stubborn.

The blow of the breakdown

Already the penultimate day at the Tour Auto where, after a second time in the morning special, we headed for the next one and the Nogaro circuit with a smile on our lips: our BMW 2002 turbo was finally working perfectly, free of the small ignition cuts caused by to a wandering coil wire. Never speak too quickly, therefore: in full acceleration, the 2.0 turbo cuts sharply and leaves our 2002 immobilized on the edge of a main road. Diagnostic ? Out of order fuel pump. This will be confirmed by the assistance team… unfortunately they came too late to allow us to clock in on time for the two following departures. Each missed race adding 50 minutes of penalty, our hopes of podium fly away for good. New goal? Grab one last victory on the last three stages of the next day. Perhaps the most arduous: rain and mist accompanied us from Pau on the last day.

If it does not yet marry the reliefs of the Pyrenees, the first very narrow and slippery special tempers our pace and makes us settle for third fastest in the category. Fiasco in the second, whose hasty start prevented us from calculating our averages in advance. Lost for lost, we decide not to respect the imposed rhythm but to adopt ours: thoroughly, to enjoy one last time! On a wider course, more rolling, but still filled with patches of humidity, the 2002 Turbo reveals itself. Furious engine when the turbo finally blows (beyond 4,000 rpm), controlled body movements and finally balanced chassis show how much the car was to dominate its rivals, fifty years ago. We will come back to this in more detail, in a dedicated test with its descendant: the M240i Coupé.

After this fun event but credited with the last time (logical!), the final special on the road had to be perfect. We prepare it carefully. We are just starting it. The car works better than ever. Géraldine’s notes arrive at the right benchmarks. 9.99 km after the start, we cross the finish cell with the feeling of not having been able to do much better. Our provisional best time in the category was finally dislodged by a small second by the winner of the general classification… which did nothing to detract from our blissful smile on the link to our final destination. At the end of a grueling rally marred by frustrating mechanical glitches, only one question remained under Andorra’s arrival arch: when are we leaving?

Find all our daily summaries in video

BMW 7 Series. The saga of the Bavarian limousine

Tour Auto 2022. The models to come across along the route

BMW 7 Series (2022). All about the limousine and its i7 electric version