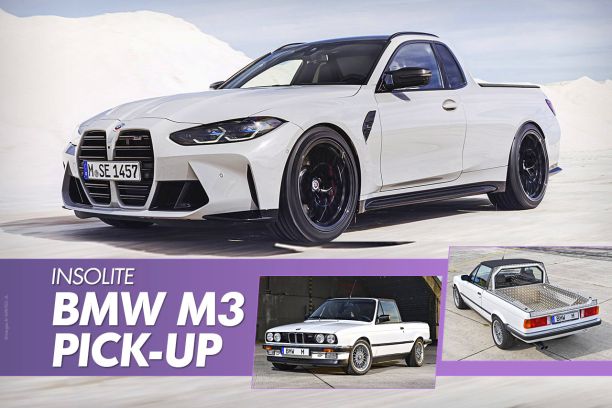 Even if the M3 pick-up imagined by the Hungarian designer X-Tomi is virtual, it has two very real ancestors.

After the late arrival of the first production BMW M3 Touring, the Hungarian designer X-Tomi imagined another variation for this Bavarian sporty family: the pick-up. A variant that this time has no chance of going into production, even if it has unknown ancestors.

Impossible is not X-Tomi. Very prolific, this Hungarian designer does not necessarily seek to imagine the appearance of tomorrow’s novelties. Very often, he prefers to imagine the most improbable versions of today’s models. After transforming the last X1 into a convertible, he tackled another much more muscular BMW, the M3. Taking advantage of the presentation of the M3 Touring station wagon, he invented a third possible body, the pick-up. With only two doors this time and a fairly short bucket, reminiscent of the typical Australian genre of “Ute”. Needless to say that the chances of seeing this variant arrive in the BMW dealership are even lower than those of winning the Euromillions jackpot. But this new “delirium” from X-Tomi is the perfect opportunity to remember that two M3 pick-ups have already existed in the past.

A service vehicle for 26 years!

The first of these pick-ups was even born almost at the same time as the BMW M3 line, in 1986. It therefore took over the base of the very first generation, the E30, even if it was not entitled to widened fenders. of the sports version. It is more precisely a convertible which was used for this conversion, in particular because it already had the necessary reinforcements to achieve the expected rigidity. The purpose of this unique model was indeed not to pose under the spotlights of motor shows. Quite the contrary: long in the shadows, it was used as a service vehicle to transport equipment and parts around the premises of BMW Motorsport in Garching, near Munich. To accomplish this task as quickly as possible, he first relied on the two-litre four-cylinder from the Italian M3s, which already produced 192 hp. Then it was the “big” 2.3 available on other markets which was grafted, with nearly 200 hp at the end of the day. and higher torque. All accompanied by great reliability since this M3 E30 pick-up was only retired in 2012, after 26 years of good and loyal service!

To replace this faithful companion, BMW Motorsport brought out the jigsaw in the early 2010s. Once again taking up the base of the convertible of the time, this time answering the code name E93. Its complex three-part retractable rigid headgear was sacrificed in the operation, in favor of a small 20 kg targa roof, manually removable. The total weight was thus reduced by 50 kg compared to the classic M3 coupé-cabriolet, while the small tipper made it possible to accommodate 450 kg of payload. Now registered for road use, this pick-up was even going to be voluntarily photographed on the Nürburgring. Enough to fuel the craziest rumours: some have taken to imagining an entry into production of this funny Bavarian, still powered by a melodious 420 hp V8. But if the official presentation took place on 1er April 2011, a date rich in fish, it’s good because there was never any question of an arrival in concessions.

HAVE. BMW M: the most amazing concepts and prototypes

Will the new M3 pick-up created by X-Tomi be able to go beyond the virtual stage in turn? If that were to be the case, not sure that BMW would take over the base of the M3 Touring station wagon, as the Hungarian illustrator did. To stay in the continuity of its elders, the M4 Cabriolet would appear more appropriate… even if it has changed its name since the previous generation. With its 510 hp biturbo six-cylinder engine and four-wheel drive, this third generation of M3 pick-up would still be much more efficient and more versatile than the E93 of 2011. But if the latter were to achieve the same career as its ancestor E30, it could still be useful until 2037. Its replacement is therefore not necessarily imminent!

HAVE. The crazy creations of X-Tomi

Volkswagen Amarok (2022). The second generation of the pickup in detail

Peugeot Landtrek. The Lion pick-up soon in the Gendarmerie?

BMW X1. On board the 3rd generation SUV and its electric version iX1