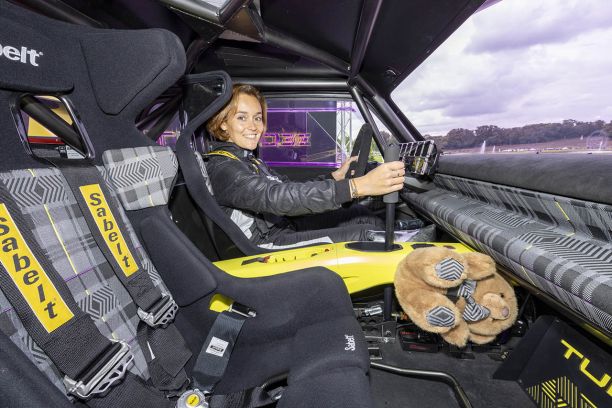 The argus took advantage of the arrival of the Renault 5 Turbo 3 E concept at the Chantilly Concours d’Elegance to slip into the seat of the 380 hp electric bombinette. Discover the sportswoman on video and come and admire her this September 25 in the Oise or from October 18 to 23, 2022 at the Mondial de Paris.

First walkabout for the Renault 5 Turbo 3 E! It is not at the Paris Motor Show, but on the lawns of the Chantilly estate that it presents itself in preview. The exuberant city-dweller does more than just make up the numbers. She takes part in the Concours d’Elegance! With its bodybuilt plastic, it does not leave indifferent: neither the young nor the big.

Comments fuse near the marquee where the car is exhibited. ” Oh look mom, the R5 Turbo of the future! exclaims a little boy barely higher than the top of the hood. ” wow “Can we hear here and there of teenagers or older people who do not fail to recall that they, too, had when they were young” the same car “. Hear by “even” an R5! Because, the Turbo and Turbo 2 were only marketed in a handful of copies (about 5,000). And ” at the time, it cost the price of a Porsche 911 discreetly recalls a visitor.

Ode to the 80s and video games

Why did Renault choose to make a drift car? ” To attract young people Sandeep Bhambra, Design Director of Renault concept cars, answers us tac-o-tac, adding that they designed the project so that it has ” a double life: real and virtual » . In a few weeks, the Turbo 3 E will indeed become the star of a video game. It already is when you look at the screens on the dashboard.

The driver’s legs are stretched out like in a single-seater. The large handle in the center of the central console is not a gear lever, but the handbrake control… for drifting! No mirrors or headlights on this car. Cameras replace them to immortalize your sliding sessions that you do to the sound of a little “old school” video game music!

To see in Chantilly or in Paris

In short, once behind the wheel, you can’t help but see ” Life in pink “. And for good reason the windows are tinted this color! We are still damn eager to try it since the concept is rolling. Evidenced by the scars on the bodywork and the 325 mm rear tires somewhat filed by bitumen… We hope that Renault will one day entrust us with the keys. Waiting for the test Largus.fr, come and discover the bombinette at the Château de Chantilly estate, this September 25 until 5:30 p.m., or from October 18 at the Paris Motor Show.

TO READ. Renault R4 and R5 sporty on the stand of the Paris Motor Show 2022