Mercedes Citan test (2021): our opinion on the cousin of the Kangoo Van 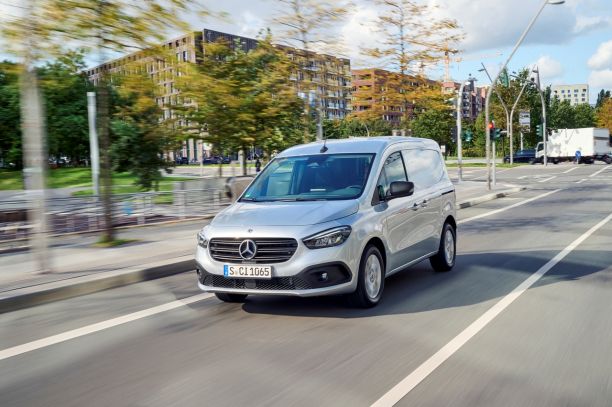 For the second generation of its Citan, Mercedes-Benz has once again turned to its industrial partner for the utility: Renault. A close derivative of the Kangoo Van, the star model stands out for its aesthetic and technical details. First test in 112 CDI diesel version with 116 hp.

This second generation of Citan is, once again, the result of the industrial partnership between Mercedes-Benz and Renault. However, unlike what happened with the first model of the name, the German manufacturer was integrated from the genesis of the model. Fact, both models – Citan 2 and Kangoo Van – were developed at the same time, with “four hands”.

Externally, only the front face is different from that of the Kangoo Van. This allows the Citan to take over the signature of the cars in the range. The rest of the body has been preserved, and the rear of the Mercedes is an almost exact copy of the back of the Renault van. Mercedes has, however, made some technical changes, especially in the suspensions and interior, where specific dashboard and central console offer an environment that meets the expectations of loyal customers of the brand.

For the time being, the Mercedes Citan range consists only of the long version (4.50 m) with a useful volume of 2.9 m3 according to Mercedes standards. Three original Renault engines are associated: one petrol of 131 hp for the Citan 113 and two Diesel of 95 and 116 hp for the Citan 110 CDI and 112 CDI. Mercedes has ignored the less powerful versions available to the Kangoo in order to position its van more in the high end. Three trim levels are on the program: First, Pro and Select (see details of the equipment on the next page). In order to justify this “premium” shift, the standard endowment is more sought after. It notably includes a multifunction steering wheel (taken from the A-Class), six airbags, a color display on the dashboard and the MBUX in-house multimedia system.

Prices start at € 21,010 excluding tax for the 113 First petrol version and peak at € 26,865 excluding tax for our top-of-the-range 112 CDI Select test model. Note that the Citan, like all Mercedes utility vehicles, benefits from the “Mobilo Van” offer; it incorporates free assistance and repair if maintenance is carried out in the brand’s network, until the vehicle’s 30th anniversary. The range will be completed in 2022 by the extended Extra-Long version, the “auto” gearbox with EDC double clutch and the 100% electric motor (eCitan), equivalent to that of the Kangoo Van E-Tech.

For a French driver, it is impossible not to think of the Kangoo Van when he gets on board, even if the dashboard, the steering wheel, the Commodos and the MBUX system are characteristic of Mercedes models. As for the numerous adjustments of the steering wheel and the driver’s seat, they make it easy to find a driving position at your convenience. The rearview is good and the seats, whose foams are specific to the Citan, offer a much firmer support than those of the Kangoo. Bigger drivers or lovers of German sedans will appreciate it. The others probably a little less. The same goes for the single left Commodo, a Mercedes specialty that requires a little adaptation time. On the other hand, the small multifunction steering wheel and the controls of the MBUX multimedia system are practical and fall naturally to hand.

The 1.5 Diesel engine snorts discreetly, and the Citan is currently only offered with the six-speed manual gearbox. This offers a clearly planned gear ratio to favor fuel economy. Fortunately, the fairly significant power (116 hp) but above all the high torque of 260 Nm available from 1,750 rpm allows efficient relaunching without having to play too much with the gear lever. Heading is excellent, as is braking.

Regarding comfort, in addition to densified foam seats, the Citan receives firmer shocks and a larger anti-roll bar. The road behavior appears even more rigorous than on the Kangoo but this is done, once again, to the detriment of general well-being. However, nothing to do with the previous Citan, which was really inhospitable and quickly became tiring on degraded pavement. It was not possible for us to drive loaded, but these beefier suspensions should allow us to maintain good road holding and equivalent comfort under load (maximum payload of 662 kilos).

The van segment is particularly competitive. The Mercedes Citan has to face many competitors, almost all brands are present in this market segment.
First major competitor: the Renault Kangoo Van. Close cousin of the Citan, it shares many elements with the German van. The Kangoo offers a more cozy comfort and the possibility of having the system without center pillar on the right side “Open sesame”, which Mercedes did not retain. The Kangoo is also available with less powerful engines than those of the Citan and logically displays lower entry-level prices. From 20 700 € HT with the “Open Sesame” system.
The Citan will also find the original Stellantis models facing it: Citroën Berlingo, Opel Combo, Peugeot Partner and Toyota Proace City. These are characterized by their good handling behavior and by the possibility of increasing the payload to 1 tonne. If the interior finishes are a little less polished than those of the Mercedes, these vans remain safe values ​​at more attractive prices. From € 18,490 excl.

The top-of-the-range positioning of the Citan will also find the Volkswagen Caddy Cargo on its road. Modern, it has excellent road handling, an ultra-modern interior with its tactile headlight and air conditioning controls, and even a full digital dashboard on certain finishes. But the Caddy can also count on TDI engines and combine them with the DSG dual-clutch gearbox as well as the 4Motion all-wheel drive. From € 22,670 excl.

Find the test report, the technical sheet and all the equipment prices on the next page …

A blood test that detects 20 cancers