How can we better remember our dreams?

Everyone dreams, every night they sleep. And yet, we only remember one to three dreams a week, according to Inserm. However, there are several techniques to better remember your dreams. Explanations. 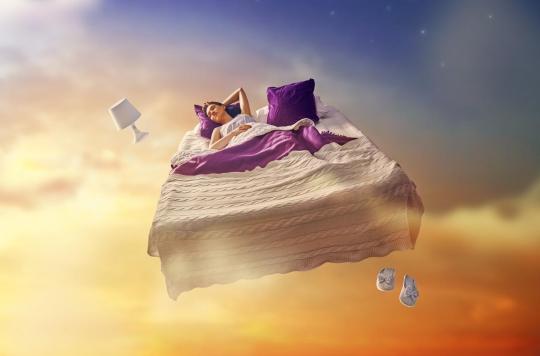 “Me, I never dream”. This sentence, you have probably already heard it from an acquaintance or a colleague, or perhaps you yourself are concerned. Know this, it’s not true: according to current scientific knowledge, everyone dreams.

But some just don’t remember. The absence of dream memories throughout life is the result of a problem encoding these memories during sleep, according to Inserm. This problem concerns only a very small minority of us.

Why don’t we always remember our dreams?

While we would have nearly four to six dreams per night, on average, we only remember one to three dreams per week. This is explained by the fact that, during sleep, the areas of the brain responsible for encoding memories are at a standstill. They only activate when awake.

That’s why it’s easier to remember your dreams when you wake up in the night. Indeed, still according to Inserm, 80 to 90% of us would be able to tell a dream in the event of awakening suffered during REM sleep, the phase of sleep where we are most likely to have elaborate dreams, and 50 to 75% if waking up at another time of the night.

Why do some people remember their dreams better than others?

However, some dreamers are better at remembering them than others. According a study, we can distinguish in the population the “big dreamers” able to remember five dreams per week, from the “little dreamers” who can remember only two per month. The first would have a different brain organization, which would make them more attentive to external stimuli during sleep, such as noise in the environment, which means that they have more phases of awakening or micro-awakening during the night, unlike to the seconds. Indeed, the “great dreamers” accumulate on average 30 minutes of wakefulness during the night, against 15 minutes for the little dreamers. The “big dreamers” therefore have lighter sleep, which would allow them to better remember their dreams. But, when you are a “little dreamer”, how to better remember your dreams?

Dreams: 5 tips to better remember them

Condition yourself. Before going to sleep, repeat to yourself several times that you want and need to remember your dreams, that it is important to you. By having this imperative in mind, it will be easier to make the effort to memorize your dreams during the waking phases during the night.

Take time when you wake up to remember it well before starting the day. “Every morning, as soon as you wake up, stay in the same lying position and try to remember your dream”recommends Jean-Baptiste Maranci, psychiatrist specializing in sleep pathologies at the Pitié-Salpêtrière hospital in Paris.

Continue to pay attention to your dreams throughout the day. Indeed, some bits of dream memories can come back during the day. In this case, take a break and give yourself time to remember it well.

Take notes of your dreams, vocal or written, with the maximum of details (the situation, your feelings, your emotions…). This is the “dream diary” technique, which is particularly effective according to Jean-Baptiste Maranci. This can not only make it easier to remember it longer by keeping track, but “it can increase the number of dreams that are remembered”, assures the psychiatrist. So plan what you need on your bedside table. Writing down his dreams has notably helped Alexandre, in his thirties, to become a “great dreamer”: “At the beginning it was restrictive, but after three weeks, I was writing pages and pages! It really came while doing it. By dint of writing them, I managed to remember three dreams by night !”

Chronic insomnia: one in two patients is ashamed to suffer from it

MS: lack of sleep in adolescence can increase the risks

Sleep: can we recover the hours lost by sleeping more on weekends?

Overweight: the less children sleep, the worse they eat

Menstruation: can you sleep with a tampon all night?

Sleeping naked: 7 benefits for your health