Hormones and specificities of women’s intimate life, such as taking contraceptives, would impact the severity of their asthma attacks in patients with this pathology. 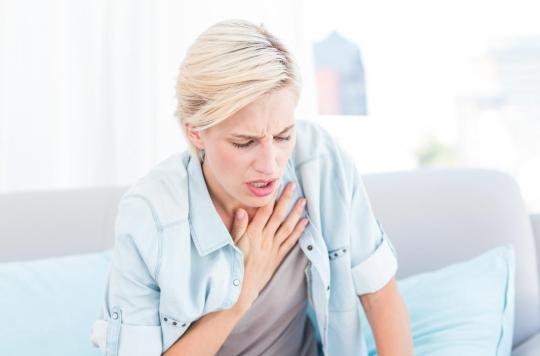 More than 4 million people suffer from asthma in France according to theNational Institute of Health and Medical Research. This chronic disease can be defined as a permanent inflammation of the bronchi, which is manifested by the occurrence of seizures. During these times, breathing becomes difficult, wheezing, the patient is short of breath, may have a dry cough or tightness in the chest. Sometimes these crises are very strong and can lead to hospitalizations and even death. Every year theHealth Insurance estimates that about a thousand people die from it.

According to a report published by theAsthma + Lung UK recently, women between the ages of 29 and 40 were 2.5 times more likely to be admitted to hospital after an asthma attack than men. In question: female hormones, which would be involved in the severity of these asthma attacks! More broadly, it is all the things in female life that would impact the risk of having severe asthma.

“Every month before my rulesI suffered from asthma”

“There seemed to be a pattern in my symptoms, related to my menstrual cycle, explains Poppy Hadkinson, a young woman of 30, in the report ofAsthma + Lung UK. Almost every month before my rules, I suffered from asthma. My symptoms made it difficult to breathe, which was terrifying, and I often ended up in the hospital. The asthma attacks I suffered were so severe that I had been ventilated four times when I was 22 and wondered if I would make it until my next birthday”.

Taking the pill reduces the frequency of seizures

A link between the menstrual cycle and asthma supported by a study published in the journal Journal of Asthma and Allergy in 2022. Scientists thus estimated that the symptoms of asthma could evolve throughout a woman’s life, until her menopause. In addition, hormonal treatments related to contraception would also have an impact. For example, taking the pill would seem to reduce the frequency of seizures while the hormones generally prescribed after menopause would promote them.

The need to find new treatments

“By understanding the role of sex hormones in asthma, we could transform the lives of three million women with the disease in the UK (where the study was conducted) and several million more women around the world, valued Sarah Woolnough, President ofAsthma + Lung UK. We urgently need to invest more in research in this area so that we can finding new treatments and make better use of existing treatments to help millions of women and save lives”. Indeed, according to Asthma + Lung UK, more than two-thirds of asthma deaths were in women in the UK, ie 5100 women a year compared to around 2300 for men.

Currently, no treatment can cure asthma, but it is possible to reduce the symptoms associated with this disease. Thus, whether men or women, the association recommends that patients follow their treatment carefully to avoid the onset of attacks and their complications.

The midlife crisis is a myth

Singing, the key to fighting the long Covid?