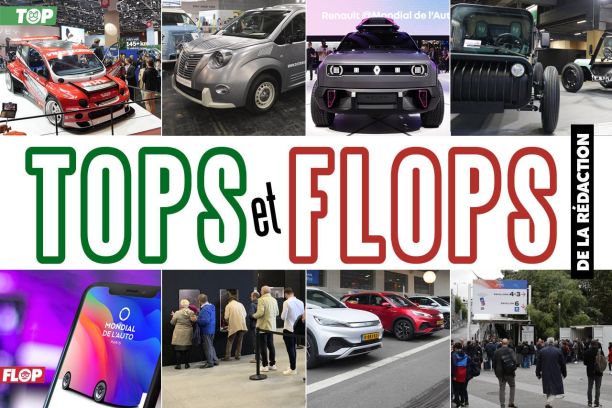 Like any trade show, there are ups and downs. Overview of the 2022 World Cup.

As usual, L’argus roams the aisles of the Mondial de Paris to tell you about the highs and lows of this new edition. If the Renault Group has played the game rather well, the absence of big names above all heralds the decline of this type of event.

the Paris Motor Show 2022 is about to close its doors. The time has come for the editorial staff of L’argus to take stock of this 89e edition marked by the absence of many European manufacturers and the strong presence of Chinese brands. Here are our favorites and our rants!

>> Discover the tops and flops of the editorial staff <<

At Stellantis, the Peugeot 408 makes its show in this giant bubble. The stand is not as spectacular as in 2018. We also regret that the manufacturer announced the Inception concept by the end of the year but that it is not visible at the show. The manufacturer could, perhaps, repeat the coup of 2018 with the e-Legend.

Despite the absence of luxury manufacturers, Ferrari is still well represented on the stand “Exceptional cars” (for a ticket of 5 euros) with no less than 15 supercars on display. They attract the public just as much as the Vilebrequin stand. The two youtubers are making the buzz with their “1000tipla”. His power ? Between 1,200 and 1,500 hp. Watch your ears, the start-up is violent!

There are few events, but some manufacturers think of their visitors, such as Vinfast, which offers to take a coffee break with a Vietnamese flavor on its stand. At Great Wall Motors and more specifically Ora, bowlers can indulge in a game of petanque while the youngest can try their hand at climbing at Dacia!

As in 2018, the Lego toy brand is exhibiting a 1 scale model. After the Bugatti Chiron, here is the Lamborghini Sian FKP 37. Model that it is possible to “start” via an interposed tablet. Considered a “catch-all” hall, pavilion 3 also hosts several French initiatives that pleased the editorial staff: La Bagnole, Lormauto’s Twingo and French Lazareth’s batcycle which will soon be featured in the film Gotham Knights.

The absence of many well-known European brands from the French market is obviously the big flop of this edition. Visitors have told us that they are disappointed and do not have a living room that makes them dream. BMW, for example, is not at the Mondial but at Equip Auto. Mercedes has chosen to present its EQE in Paris, but in a much more chic place than the Porte de Versailles: the Rodin Museum. Does the brand with the star find the World Cup not sparkling enough?

Among the flops we can also mention: connections between the halls that are not always explicit for visitors, an entrance ticket at a prohibitive price (€30) and a test center that pales in comparison with a dozen or so cars that can be reserved at the essay, most of which are Chinese. A major event eagerly awaited in recent years, the World Cup has clearly lost its luster to the chagrin of visitors. The absence of major manufacturers weighs heavily in the organizer’s economic equation. It’s a bit like the snake biting its own tail. A question now arises, what will be the future of motor shows? See you in two years for a possible 90e edition provided that the manufacturers play the game.

Book your ticket for the 2022 Paris Motor Show now!