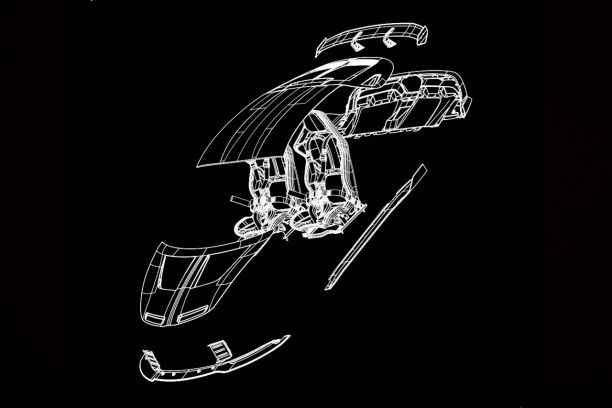 Alpine announces the A110 R, lightened thanks to specific body elements.

Alpine announces for October 4 the presentation of the A110 R, the sharpest variant of its berlinetta, designed for use on the circuit. It will then be exhibited at the 2022 Paris Motor Show, from October 18 to 23.

In the alphabet, the R comes before the S. At Alpine, it’s the opposite. The Dieppe manufacturer announces the A110 R, as “radical”, a new variant of the berlinetta even more efficient than the A110 S. Specifically, Alpine promises “ an extreme version, lighter, sharper, even more inspired by motor racing “.

An A110 designed for the track

As a preview of the presentation of the A110 R, Alpine publishes illustrations of some of the parts specific to it. We can thus discover a front spoiler, a very open front bonnet, side sills with vertical fins at the rear, a new roof, a rear spoiler with gooseneck uprights and a two-part diffuser. Some of these elements could be made of carbon fiber, which remains to be confirmed.

Two new types of rims are also revealed, as well as a half train suggesting reworked ground connections. The bucket seats with six-point harnesses suggest that the car could be exclusively approved for use on the circuit.

Alpine does not yet communicate on this subject, nor on the possible modifications made to the powertrain. Under the hood of the A110 S, the four-cylinder 1.8 l turbo develops 300 hp for 1,109 kg empty with weight reduction options.

Alpine will unveil the A110 R in full form on October 4 in Japan, ahead of the Suzuka F1 Grand Prix. The coupé will then be the star of the brand’s stand at the 2022 Paris Motor Show, which will be open to the public from October 18 to 23.

9 signs that show you’re eating too much sugar