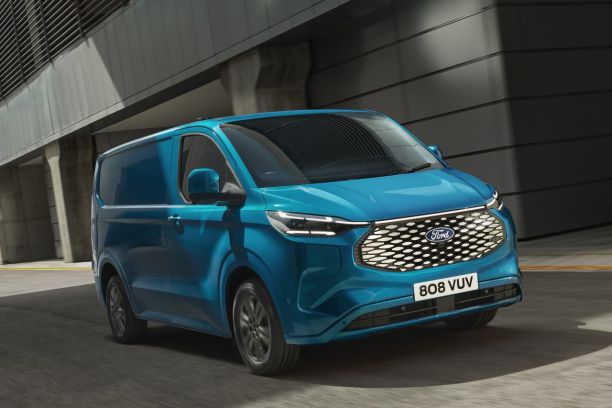 The next generation of the Ford Transit Custom comes in its electric version.

Ford publishes the first images of the new Transit Custom, a generation that will be offered in a 100% electric version with nearly 400 km of autonomy. The utility is not expected on the roads before the end of 2023.

Ford recently announced seven new electric vehicles for Europe by the end of 2024 and is unveiling one of them today: the E-Transit Custom. As the name suggests, this is the utility New generation Transit Custom in its “zero emission” versiona first for the van whose current iteration is already offered in micro-hybrid and rechargeable hybrid.

Change of look for the Transit Custom

The new Transit Custom adopts a more muscular appearance than its predecessor, a less vertical front bonnet and clearly refined front lights, all underlined by an imposing octagonal grille. The upper edge of it incorporates a light ring that links the optical units, as at Volkswagen, enough to remind that the two manufacturers are partners in the development of commercial vehicles, among others. The Ford E-Transit Custom will feature LED lights on all four corners. The utility should also be offered in thermal with different levels of hybridization. For the moment, the brand with the blue oval does not reveal any image of the interior.

Specifications that remain to be known

Ford does not say more about the powertrain of the E-Transit Custom than about its equipment. He just points out that the vehicle will have for him ” fast charging and full towing capacity »that it aims for a range of 380 km, and that it will be possible to power external devices from the van.

This somewhat incomplete communication is explained by the expected delay before the production of the van. This will only be assembled from the second half of 2023 at the Ford-Otosan plant in Kocaeli, Turkey. In particular, it will compete with electric vans of the same size from the Stellantis group.

Other electric utility vehicles and their “touring” variants have already been announced, in this case the future Transit Courier, Tourneo Custom and Tourneo Courier. On the passenger car side, we expect in particular two SUVs using the Volkswagen group’s modular MEB platform as well as an electric Puma promised for 2024.

TO READ. Fiat Scudo (2022). Price, range and equipment of the cargo van

How about an electric bike?