BMW 7 Series. The saga of the Bavarian limousine 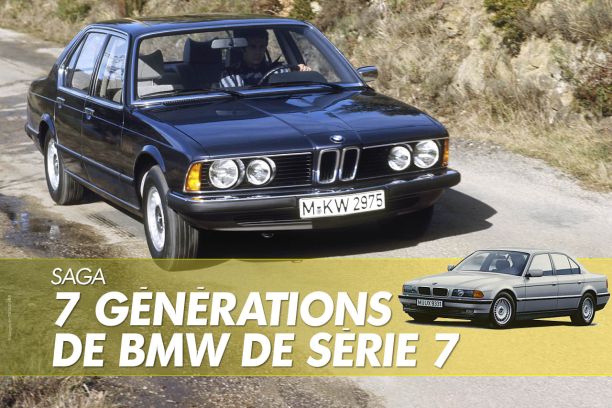 Since 1977, no less than seven generations of the 7 Series have succeeded each other at the top of the BMW range.

With its more than imposing grille and its two-storey lights that an SUV would not deny, the BMW 7 Series is already turning heads. Let’s take a step-by-step look at the six generations that preceded it.

When the Audi A8, the flagship of the brand with the rings, is on the downward slope, it will give way to a 100% electric replacement and the Mercedes S-Class will have to be wary of its watted alter-ego named EQS, the BMW 7 Series remains serene. The seventh generation has just been unveiled. However, its thermal version is not planned for Europe where only the battery version, BMW i7, will be on the program. But both share the same fantastic plastic.

This is an opportunity for us to look in the rear view mirror and dive back 45 years to return to the origins of the model with the Series 7 type E23 launched in 1977. It inaugurates the name by taking over from the BMW 2500 type E3. Compared to the latest version only offered in a long version, with a size of 5.39 m, the original 7 Series seems very frail with its 4.86 m. Today a BMW 3 Series reaches 4.70 m. Under the hood of the 7 Series E23, no six-cylinder block. In 1986, the BMW 7 Series type E32 took over and saw things in a much bigger way about engines. In addition to the entry-level 6 in-line six-cylinders, two V8s are nestled at the heart of the offer, in particular to attract customers from the country of Uncle Sam, while a strong 300 hp V12 gives the BMW 7 Series its credentials.

Then, with the third version that appeared in 1994, coded internally E38, a new dimension appeared, a long-wheelbase version that allowed the 7 Series to reach a very handsome size of 5.12 m (compared to 4.98 m for standard variant). This opus also inaugurates a six-cylinder diesel engine called 725 Tds which will then give way to the 730d which will be completed by the 740d with V8 engine delivering 245 hp.

When style caused a scandal

At the turn of the millennium, the BMW 7 Series caused a scandal, his line signed Chris Bangle launched a debate that is still relevant today. Asking the question about the fact that we can dare to be original at a certain level of range. It is named E65/E66 according to the length of the body. On board, the appearance of the iDrive wheel for the multimedia system also has its share of detractors. In 2006, the most emblematic model in the range embarked on the adventure of hydrogen, a gas that the V12 engine of the 760i drinks from with a power that drops drastically from 445 to 260 hp. To calm the spirits heated by its predecessor whose mid-career restyling, in 2005, could not do anything, in 2008, the Series 7 type F01/02 returned to much more sober lines. Under the hood, the 760i’s V12 delivers 544 hp. The spirits calm down.

Formal continuity remains the key word in 2015 with the appearance of the sixth generation (G11/G12) which, thanks to its ever-increasing number of driving aids, raises the question of the interest of keeping a driver behind the wheel. In technological excess, the 750d xDrive version has a 3.0-litre six-cylinder diesel engine supported by, no less, four turbochargers enough to deliver 400 hp and 760 Nm. In 2019, at the time of the restyling, the muzzle of the auto then unveils an imposing grille which ultimately was really not that big… compared to that of the new BMW 7 Series G70.

TO READ. BMW 7 Series (2022). All about the limousine and its i7 electric version

BMW 7 Series (2022). All about the limousine and its i7 electric version