The amount of sleep, whether too long or too short, of the elderly could affect their brain health. 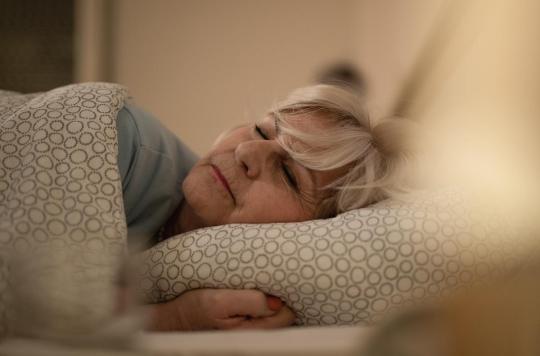 Sleeping well is essential at any age. For older people, sleep duration could even affect their brain health. This is revealed by a study published on August 30 in the JAMA Neurology. The latter indicates that sleeping too much or not long enough is associated with an increased risk of developing Alzheimer’s.

Oversleeping does not raise beta-amyloid levels

Study participants who reported a short sleep duration, six hours or less, experienced elevated levels of beta-amyloid. This peptide is known to increase the risk of dementia. These volunteers also scored moderately to significantly lower on tests aimed at assessing cognitive abilities, including orientation, attention, memory, language, and visual-spatial skills.

Volunteers who reported long sleep duration, more than nine hours, scored significantly lower on cognitive tests than those who reported normal sleep duration. However, they did not show elevated levels of beta-amyloid. “The main takeaway is that maintaining healthy sleep is important later in lifesays Joe Winer, researcher at Stanford University and lead author of the study. In addition, people who sleep too little and people who sleep too much have a higher body mass index on average and have more depressive symptoms..”

Beta-amyloid, the protein linked to Alzheimer’s

Beta-amyloid or amyloid-β is “a protein created during normal brain cell activity, although we are still unsure of its function, adds Joe Winer. Amyloid-β is one of the first detectable markers in the progression of Alzheimer’s disease. In Alzheimer’s disease, amyloid-β proteins begin to accumulate throughout the brain, assembling into plaques. Amyloid plaques are more likely to appear with age, and many people with accumulated amyloid in their brains remain healthy. About 30% of healthy 70 year olds will have substantial amounts (of) amyloid plaques in their brains.”

Previous research has suggested that sleep may both help limit amyloid production in the brain. “Amyloid-β can begin to accumulate many years before symptoms appearthe researchers added. This makes it difficult to distinguish between cause and effect when studying sleep problems and Alzheimer’s risk, especially if you’re only looking at the data at one point in time..”