The Ford Bronco marketed in France in 2024 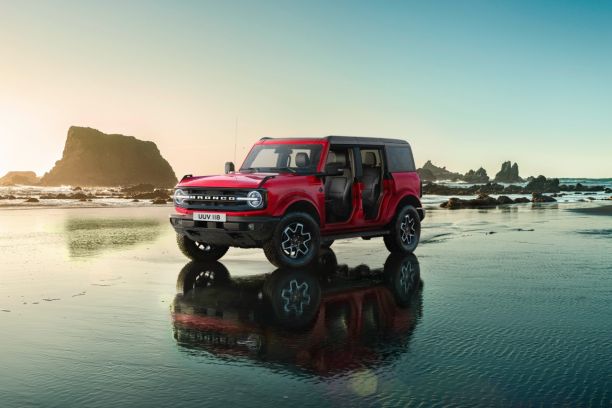 Ford has formalized the marketing of the Bronco in Europe.

The Ford Bronco, launched in 2020 in the United States, is about to be marketed in Europe. We will have to be patient since it will only land in France in 2024. Only the five-door body will be offered, at an unknown price for the moment.

A legendary all-terrain vehicle launched in 1966 in the United States, the Ford Bronco was revived in 2020. Since its launch, the 4 x 4 has enjoyed enormous success across the Atlantic, the only continent where it was previously marketed. Ford will change the game at the end of 2023 since the off-road will be officially marketed in Europe. Jeep Wranglers and land rover Defender just have to behave!

In France, the Bronco will only arrive in 2024 according to Ford France. You will therefore have to be patient. You can always express your interest on the manufacturer’s website to keep you informed. and hope to be among the first to get your hands on off-roading. Note that the adventurer will only be available in five-door bodywork. The range, as well as the prices, will be announced at the time of marketing.

Prepared for all situations

True to its adventurer DNA, the Bronco can navigate any terrain thanks to its all-wheel drive, seven-member steel chassis and state-of-the-art electronics. As on the Ford Ranger Raptor, there is the “Terrain Management System” which integrates seven driving modes. Four are intended for road use: Normal, Eco, Sport and Slippery (snowy or icy road). The other three – Mud/Rocky, Sand and Baja – are optimized for off-road riding. The 4 x 4 also has a cruise control adapted to difficult terrain active up to 31 km/h and can use ” torque vectoring to reduce the turning radius by up to 40% “, announces the manufacturer. Finally, the driver can accelerate and brake with the right pedal only thanks to the One-Pedal Drive 2 function.

The passenger compartment mirrors the exterior: robust. This does not prevent the Bronco from having modern equipment as standard. The Apple CarPlay/Android Auto-compatible infotainment system is provided by a large 12-inch touchscreen combined with 8-inch digital instrumentation. Finally, the 360-degree camera allows you to better understand the imposing size of the SUV (4.82 m long and 1.93 m wide). Otherwise, you’ll just have to remove the doors (and the roof) to easily take a look at where you want to put your 17 or 18-inch wheels.

The brand with the blue oval has not yet communicated on the engines that the Bronco will receive. In North America, the offer consists only of petrol blocks: a four-cylinder 2.3 turbo of 300 hp or a strong 2.7 biturbo V6 of 330 hp. There is also a Raptor version powered by a V6 3.0 biturbo with more than 400 hp but which should not reach us. As for the transmission, it is provided by a seven-speed manual gearbox or a ten-speed automatic gearbox.

Dengue fever alert in France: 5 facts to understand the situation

Suicide: how to spot the signs?