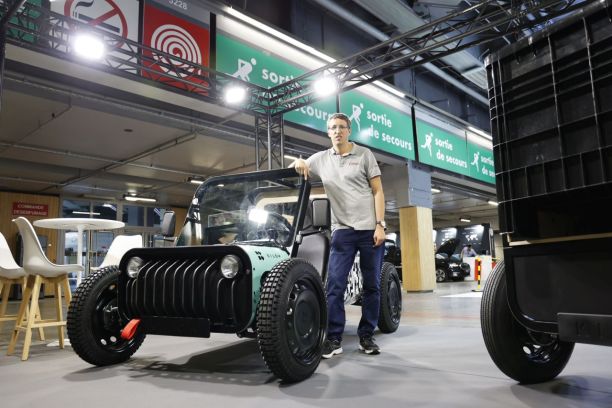 At the 2022 Paris Motor Show, the La Bagnole quadricycle is one of the most unusual models. The argus met the founders of the young brand Kilow.

Real off-road skills, fun at the wheel and a cute look at an affordable price: this is what La Bagnole promises, an electric quadricycle that will be manufactured in France from 2023. We took advantage of its presence at the Mondial de l car to meet the founders of the young Kilow brand.

Deprived of major manufacturers, hall 3 of the 2022 World Cup is clearly not the busiest. But there is still something new that might catch your attention. Its name, La Bagnole, could almost have served as the title of a song by Renaud. While its mini-buggy look also oozes whimsy. However, the project of the young brand Kilow is very serious. The first deliveries of La Bagnole are scheduled for next spring, with a base price of €9,900, minus the ecological bonus of €900. Last July, The argus was among the first French media to tell you about this funny electric quadricycle from the Hautes-Alpes. Today, we wanted to take advantage of the presence of the model at the Paris Motor Show to approach her closely, while taking stock with the two creators of Kilow and with her marketing director.

TO READ. La Bagnole: the funny low-cost cart made in France

Since our telephone interview, the concept, quite refreshing, has not changed one iota. The dashboard lives up to its name better than ever, since it is practically reduced to a piece of oak wood. Here, there is no question of giant screens or ultra-connectivity. Only a smartphone holder will be offered as an option. But there is nothing austere about this counting.

“On the contrary, says Florent Vitiello, one of the two founders of Kilow. We think that going back to minimalist things increases the sensations. It’s a car where you have fun at 30 or 40 km/h.“

The bridle at 45 km / h of the version without a license, accessible from 14 years old, would thus have nothing frustrating. No more than the 60 to 80 km / h maximum of the variant with license. Especially for those who will choose the open body, which is also the cheapest.

“The idea is to make a simple car, to get back to basics. Four wheels, a steering wheel, pleasure, fun, something accessible to everyone and really something that does not consume energy »continues Florent. To take advantage of doors, a roof, mudguards and heating, an additional €2,000 will be required. This does not prevent La Bagnole from remaining much more affordable than the many other electric quadricycles at the Mondial, with a price of €11,900 bonus deducted in this configuration. “We position ourselves between the Citroën Ami and what is done elsewhere, like at Aixamexplains Florent Vitiello. For us, that means that the dream we had, we will see it in the streets because it will become accessible. » Discussions are also underway with a banking partner to offer affordable long-term rental offers.

TO READ. Cars without a licence: which models are accessible from the age of 14?

This reasonable price is all the more meritorious in that it does not go through production in a country with derisory labor costs. “We want to bring the maximum added value back to France”tells us Léo Choisel, the designer and co-founder of Kilow. “The chassis is made in France, the running gear is made in France, the bodywork is made in France”, he details. A big difference with the Citroën Ami or the future Mobilize Duo, which are built in Morocco. Only a few elements come from Asia for the moment, such as the two electric motors integrated directly into the rear wheels and the battery cells. But the final assembly of this accumulator will be well done in France. The chosen cells would also be interchangeable to facilitate repair in the event of failure and recycling.

After the two pre-series models that have been completed in extremis for the Mondial, a dozen copies of La Bagnole will soon be released in order to test the production process and reliability or even to finalize the homologation. The real start of the factory based in Cluses, in Haute-Savoie, is currently planned… for the 1er April 2023! For a company born on Christmas Day 2020 and also focused on fantasy, you can imagine that this date was not chosen at random. The association with a local industrial consortium, the Savoy group, which works in particular with major car manufacturers, should however help to guarantee the seriousness of the result. Especially since the two founders already have some experience in electric vehicles, whether bicycles, motorcycles or even boats.

What if Dacia had copied Kilow?

After the Salon VivaTech, more dedicated to professionals, the presence of Kilow at the Paris Motor Show was not really planned at the start. But it allows La Bagnole tomeet the general public for the first time. What continue to blacken a book of pre-orders which is already fuller than the two co-founders hoped.
“The bet we have won is that people smile when they look at La Bagnole, that’s what we wanted, says Léo Choisel.“
The lines, both so simple and so original, that he drew seem to have hit the bull’s eye. Partly inspired by a wooden toy for children or by certain Land Rover models, such as the old Defender which lends its mirrors, this bodywork was also largely dictated by technical constraints. “We looked for the simplest process to make a car, which led us to this very cubic shape, very geometric but also very identity in the end”, he adds. A speech that is reminiscent of that of Citroën with its Oli concept, just like the slogan “Less is better”, true leitmotif of Kilow. But it is above all the Dacia Manifesto that has caught Leo’s attention lately. “They copied uslaughs the young designer. We went to the extreme, they did it on their own scale with the Dacia image to keep. But we feel that we are on the same wavelength. »

TO READ. Citroën Oli: the electric pick-up that announces the future face of the Chevrons

This philosophy of “ less is more”, it is also found in the range. Only three colors and a handful of options appear in the catalog, while the number of versions will be limited. In addition to the choice between open body or closed body, different types of skips will be offered. With its silhouette of a small pick-up, La Bagnole is indeed very much aimed at professionals for last-mile deliveries. But it can also be used by a teenager or as a third car in a second home. “ We had pre-orders for Cap Ferret, it’s a bit like the Mini Moke, the Méharisays Florent Vitiello. And, besides that, we also had some for everything that is urban. I go to work with a cheap, economical car and I want fun. » It will also be possible to choose between two battery packs, offering either 70 km or 140 km of autonomy. With the possibility of adding an original “jerripack”, removable batteries in the shape of a jerry can that can be plugged into the vehicle to add 30 to 40 km of autonomy.

On the other hand, unlike Eon Motors, another French quadricycle manufacturer based in the Alpes-de-Haute-Provence, Kilow does not intend to install two additional motors in the front wheels.
“We are often asked the question of whether we will make a 4 x 4, and I have always said no because you add controllers, you add motors, you add weight, explains Léo.“
“When the vehicle is light like that, he continues, There’s no point in four-wheel drive. It goes everywhere, like Citroëns 2CV in Paris-Dakar. » Especially since it will also be possible to choose between tires with a road profile and others more focused on off-road. Despite a speech in which the word “fun” comes up regularly, the two creators of Kilow, a company formerly known as Kg Auto, therefore seem to have their heads on their shoulders. They are actively working to set up a distribution network, in France and in Europe, even in more distant regions. In the meantime, it is already possible to make a pre-order by paying 990 €, refundable at any time. And if you want to know if La Bagnole is as “fun” at the wheel as its designers promise, stay connected on largus.fr: we intend to offer you a test drive as soon as possible!

(Electric) bicycles: Why wear a helmet with an electric bicycle?