Penis: the French are rather satisfied with the size

Asked what would be the average penis size, the French are close to reality with a figure of 13.6 cm. 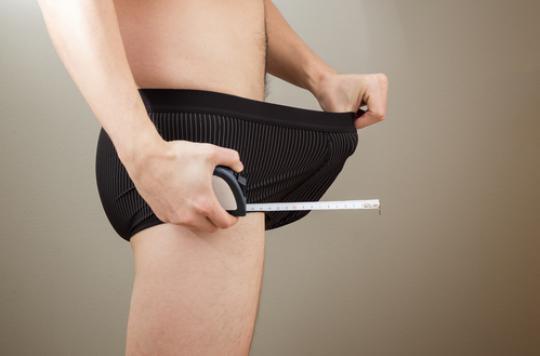 The question of the size of the penis is a delicate subject on which a certain number of misconceptions still circulate. The medical teleconsultation site Zava come back, through a new study (1), on some prejudices regularly conveyed. And unlike their European neighbors, the French show great lucidity.

Moreover, like the Dutch, the French interviewed do not dream of an “inaccessible” ideal. When asked about what would be the ideal size for them, they feel that 14.9cm would be an honorable number. This is less than 1.5 cm than the average size seen in Europe (16.4 cm).

European men are not, however, unhappy with their fate: nearly 45% of the men questioned consider themselves “satisfied” with their intimate measurements, 14% even saying they are “very satisfied”. The most fulfilled age group being 45 years and over.

Women give it little importance

In addition, for almost 60% of the men surveyed, height has no impact on their confidence in bed. Here again, the older we get, the less it seems to matter (66% of men aged 45 and over say that height has no influence). Even if a minority (16%) still say that their sexual confidence is correlated with the size of their penis.

Finally, the popular adage, “The longer the better,” no longer seems entirely relevant. More than 1 in 5 women do not attach any importance to the size of the penis, and the vast majority (67%) attach a relative importance to it.

As a reminder, a study published in 2015 has fixed the average size of the erect penis at 13.12 cm worldwide. In France, this would be between 12.8 and 14.5 cm according to work carried out by the National Academy of Surgery in 2011. And for those (or those) who seek the most up-to-date data on the subject , know that there is a world mapping, very precisely sourced, the size of the penis at rest and erection. It has already generated more than 20 million views according to the site that broadcasts it, proof of the interest in this subject …

(1) Zava surveyed 2,121 respondents on issues related to sexual health and their ideals regarding genital size. 1,148 respondents were identified as men, 973 as women. Of these respondents, 1,055 were from the United States, and 1,066 located in Europe.

Medical error: an octogenarian loses his sight but not his life

A 3D operation broadcast around the world

Bariatric surgery would be effective in treating liver disease

Drôme: a “butcher” surgeon breaks the life of a patient