Obesity increases with the number of McDonald’s

A French study shows a strong correlation between the incidence of obesity and the density of McDonald’s restaurants around the world. The United States is the most affected, followed by Canada. 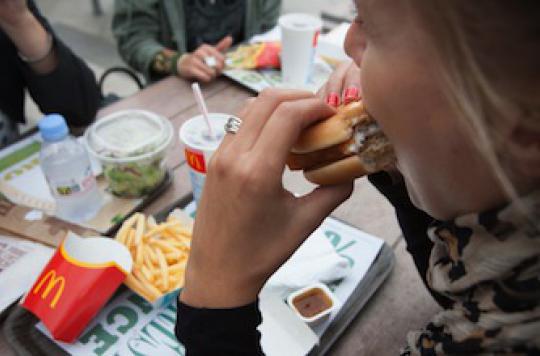 If you want to stay in line, choose your place of residence wisely. A French study has just shown that there is a real link between overweight and the number of fast food restaurants in a country. This research published Wednesday in the Journal of Internal Medicine Anyone who loves hamburgers, fries, and other soda drinks will undoubtedly be disillusioned.

20% obesity in high density McDonald’s countries
French doctors at Hôpital Avicenne (93) looked at obesity rates in 44 countries, based on data from the World Health Organization (WHO). They identified the number of McDonald’s restaurants per million inhabitants in each of these countries. Among them were the ten most populous countries on the planet.
By crossing the chain’s geographical implantation rate with the number of obese people, these scientists were able to establish that, compared to the average, the obesity rate was less than 5% for a Mc Donald’s density considered ” weak “.
In comparison, this rate climbed to more than 10% for an “average” density, and even reached more than 20% in countries where the density of these fast foot was considered “very high”.

France is among the countries most affected by overweight
In this ranking, the United States is a heavyweight and remains the country most affected by obesity. They are closely followed by Canada, Japan, Australia and then France, in 5th position. Conversely, China keeps the line with Pakistan, since they are the countries where the American brand is less present. They therefore have lower obesity rates than other countries.

McDo would follow the evolution of a company
However, the authors of the study prefer to remain cautious about their results, “they do not directly question the American brand but underline a strong association between the presence of this type of restaurant and obesity. Not to mention that there are many other factors to take into account to explain the obesity rate, such as a sedentary lifestyle ”, they specify.
Asked about Europe 1, Frédéric Lapostolle, main author of the study confided: “ Mc Donald’s is a perfect accompaniment to the evolution of a society, it does not settle where no one knows steak and fries. In China for example, in the big cities, there are a lot of McDonalds, while 200 kilometers from Beijing, where we live as in the Middle Ages, there are none, ”he concludes.

And to clear up the clown sign a little, note that McDonald’s is now making more and more efforts to offer its customers more healthy menus. The American chain thus announced on September 26 a global diet plan by 2020. No more fatty menus for young and old alike: fruits and vegetables will now be available for everyone!

Breastfeeding: chronic inflammation in the mother can reduce milk production

Obesity: the fault of ultra-processed foods without protein?

Obesity: sand, a possible remedy to fight against excess fat?

Air pollution leads to weight gain and obesity in women

Obesity, overweight: why eating too late increases your risks