Nio. We tested and approved the battery exchange service in 5 minutes 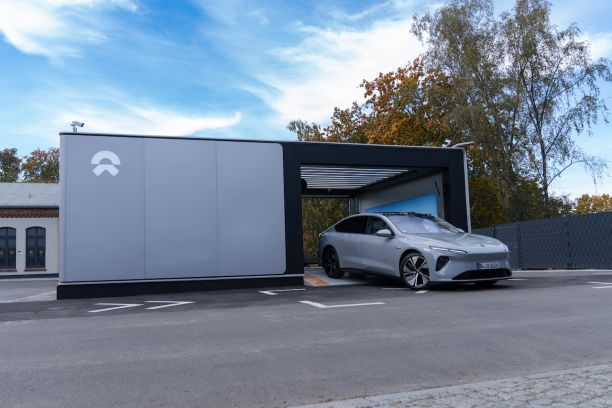 The Berlin station is located in the heart of Motorworld Manufaktur, a temple of vintage and prestigious cars.

Nio offers to exchange the battery of a model of the brand in its Power Swap Station. Three locations are currently being tested in Germany. The argus was able to try this quick and easy process in the brand new Berlin station with an ET7 sedan.

Forget your previous experiences with refueling or electrons! The Chinese manufacturer Nio is innovating for its electric car users with a battery exchange service. Three sites are currently being tested in Germany. We were able to test the one in Berlin.

TO READ. Nio ET7 test. Our opinion on the Chinese electric, rival of Tesla

A battery changed in 5 minutes flat

Arriving near a Power Swap Station by Nio, we find ourselves facing a mini-building resembling a container, with a parking space accessible by a small access ramp. On approach, our Nio ET7 recognizes the markings on the ground and the automatic parking system takes over. In two maneuvers, the car is positioned. Dialogue then takes place between the station and its on-board system, before the latter shuts down to begin the exchange operation.

The car is lifted to remain stable during the operation. The fastening elements of the heavy battery of around 600 kg are unscrewed by the robotic system, which engulfs it in the foundations of the station. The new battery is then brought and coupled to the car. Once the checks for correct operation have been carried out, the on-board system resumes operation, a green light in the porch of the station lights up, as after an automatic car wash. Here is the Chinese limousine is ready to set off again for a little less than 400 km with its 75 kWh battery (or more for the 100 kWh battery) 90% charged to preserve its durability! 5 minutes top time will have been enough where, with a cable, the most efficient models would have required about twenty minutes. Note also that the Nio are not among the best students when connected to a terminal. Their DC charging power, limited to 130 kW, requires 30 minutes to go from 10 to 80% charge on the 75 kW battery.

The batteries are all enclosed in an identical interchangeable casing in the Nio of 2e generation based on the NT2 platform (ET7, EL7 and ET5) and imported into Europe. They are offered in three power levels, with three different chemistries which explain why they ultimately have fairly similar weights:

Nio is also working on a smaller battery pack (60 kWh) but under 800 volts. The definition of the Nio battery system can be summed up in 3 words: recharge, exchange, upgrade. Classic charging is of course possible, provided by a Nio card giving access to 380,000 charging points in Europe. However, the power limited to 130 kW restricts the speed of conventional refueling.

The lucky first customers should benefit from some free swaps. In Norway, battery exchanges are charged around €10 + 20 cents/kWh, which amounts to around 40 cents/kWh for 50 kWh saved. An average price. Note that it will be possible for a customer renting a 75 kWh battery (good enough on a daily basis) to pay a supplement to adopt, during the summer holidays for example, a 150 kWh pack. This flexibility would, according to the calculations of the brand, save the use of 17% of raw materials.

A station like Berlin has 13 batteries stored in its building. They are continuously recharged over a power range of between 20 and 90 kW as needed. Modest values ​​to favor their lifespan. The whole station, manufactured in the Nio Power factory in Hungary, weighs around 16 tons and must therefore be built on land that can accept such a mass. The investment is also heavy since the amount reaches around €400,000, which is much more than the installation of a fast charging station. In Europe, plans are to reach 20 Power Swap Stations this year, 120 in 2023 and more than 500 stations by 2025. Several hundred stations are also planned in the United States by 2025.

In China, around 1,000 installations are installed, including more than 80 for the Shanghai metropolitan area alone. However, at peak times, you sometimes see queues forming there. Each station is designed to accommodate 500 to 1,000 users in its catchment area. Such a figure is possible thanks to a theoretical volume of 300 exchanges in 24 hours. In reality, those responsible for the development of the network concede that they rely rather on 150 swaps/day, which is already impressive. Chauffeur services bringing the car in at night to exchange its battery help to improve operating efficiency. Nio customers coined a term: Power Swap District Housing. It designates the zones belonging to the radius of reach of a battery exchange station, a bit like the sectorization of schools. Today 60% of areas with high potential would be covered in China according to the manufacturer, and 95% are planned in the long term.

Beyond the rapid battery change, the station can also become a valuable overnight energy storage location, with possible applications to feed the grid when needed, in V2G mode. The brand also imagines a reward system for users who, instead of coming to exchange their empty battery for a full one, would do the opposite if they do not need their car.

Years ago, start-up Better Place and Renault had experimented with this, as well as Tesla, but no one had been able to bring the idea of ​​battery swapping to market at the time. Today, the battery giant CATL (supplier of Nio, alongside BYD), which has set up an embryonic network with Evogo, and the manufacturer MG, are also conducting battery “swap” experiments in China. But, the development prospects of their services still seem unclear. Nio, meanwhile, says it is open to sharing its technologies with other manufacturers. But no alliance seems to be emerging as in the field of electric scooters, where brands like Yamaha, Honda, KTM, Piaggio or Kymco have come together in a consortium aimed at standardizing removable batteries. So their urban electric scooters could share their batteries via a system of battery exchange stations, as the Gogoro brand does with great success in Taiwan. A principle easier to apply for batteries weighing 10 kilos than for packs of several hundred kilos fixed under cars.

Wider deployment of automotive battery swapping is now up to lawmakers to define a universal standard, as is the case for charging, Nio officials say. Like Tesla, which opens some of its Superchargers to other brands, Nio could open its swap stations to customers of other brands. Unless this concept were called into question by the technological developments of tomorrow: if solid electrolyte batteries keep their promises of twice as fast recharging and offer multiplied autonomy, there is no longer any need for a complex swap system.

Electric bicycles: how do you charge your battery correctly?

This portable charger can quickly charge a MacBook Pro

TikTok is working on its own music streaming service

Solid battery. Where is the announced future of the electric car?

Parkinson’s: walking for 45 minutes regularly slows the progression of the disease

One snakebite death every 4 minutes