In a cave where extreme conditions prevail, researchers have found bacteria that have evolved to feed on sulphite, manganese and copper oxide. 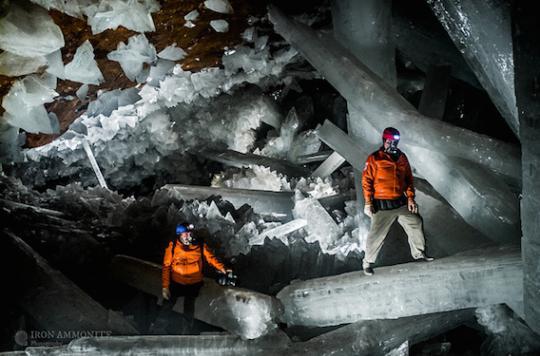 800 meters underground, the famous gypsum crystals of the Naïca mine (Mexico) have trapped bacteria for 10 to 60,000 years. These would then have evolved, in order to be able to survive in this hostile environment, by feeding on sulphite, manganese and copper oxide.

Located 800 meters deep, just above a magma chamber, it is 40°C, and the atmosphere is very humid. Conditions that earned him the nickname “hell”.

The conference of the American Association for the Advancement of Science (AAAS), which notably publishes the reference scientific journal Science, has been held since Thursday in the United States. It was on this occasion that Penelope Boston, head of NASA’s Institute of Astrobiology, presented the results of this astonishing discovery, which has not yet been published.

In addition to having survived this long, 90% of the bacteria identified were of unknown origin.

The American scientists behind this discovery then did not hesitate to play with science fiction to expose it. The existence of these micro-organisms suggests that space travel could represent a risk of contamination by extraterrestrial bacteria potentially dangerous for humanity, they explain.

Without going that far, this news reinforces the hope of discovering organisms capable of surviving in the extreme conditions that could reign on other planets.

His dog licks him, his skin rots!

Raw milk cheeses: what are the health risks and how can they be better prevented?

Staphylococcus: carriers who ignore each other are twice as likely to die prematurely

Heart cells change (a little) after a ride in space

Menstrual health: a new bill to (finally) consider periods in the public space