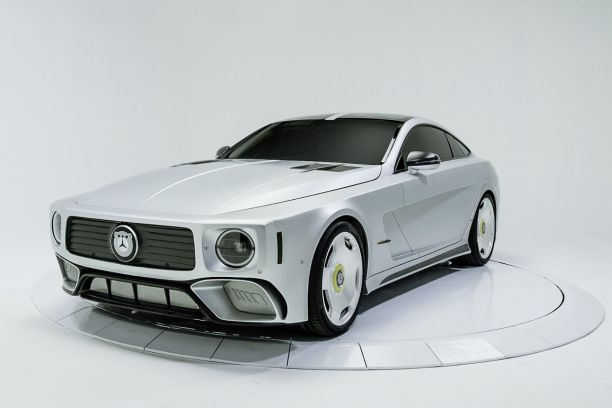 This unique coupé is the joint work of Mercedes-AMG and will.i.am.

Mercedes and music star will.i.am have teamed up to create a unique car called Will.I.AMG. This coupé based on the AMG GT 4 Doors is accompanied by a collection of clothing which will be sold for charitable purposes.

Ahead of the first Miami F1 Grand Prix, Mercedes-AMG is presenting a concept car designed with American musician, rapper, producer and entrepreneur will.i.am, known in particular as a member of the group Black Eyed Peas. The car was named Will.I.AMG and developed as part of a project called “The Flip” aimed in particular at helping young people to access jobs related to new technologies. For its manufacture, the manufacturer and the star called on the Californians of West Coast Customs.

The concept is based on a Mercedes-AMG GT 4-Door Coupé. We can guess it from its rear part, from the shape of the pillars of the flag and the lights in particular. But everything else has been completely re-bodied, drawing inspiration in particular from the SLS and the G-Class.

We find the “look” of the all-terrain between the rectangular grille and the bottom lights which frame it on a steep front face highlighting a bulging bonnet, while the long bonnet and the two large doors (compared to four originally) give the car GT proportions.

Said doors, hinged from the rear, have a “suicide” opening“. The almost full rims, which are in the catalog of Mercedes-AMG with another finish, accentuate the massive appearance of the coupé.

The many facets of Mercedes

“I grew up in a ghetto. I grew up with Hip-Hop. I’ve watched legendary Hip-Hop artists rap about Mercedes, so owning a Mercedes has always been a dream. For many urban children, owning a Mercedes is a symbol of progress and overcoming difficulties. Now I have achieved my goal and gone further by re-imagining and creating my own vision of an AMG model. But I didn’t touch the engine, because AMG really makes the best engines.“, says will.i.am.

Alas Mercedes-AMG did not specify which engine was under the hood, several being proposed for the GT 4 Doors. The artist says he is inspired by the founders of AMG, Hans-Werner Aufrecht and Erhard Melcher, whose mechanical workshop set up in Burgstall in 1967 has evolved into the sports division of the Mercedes group today.

A fashion collection for a good cause

Instead of the Mercedes logo, a bear face sits enthroned in a circle in the center of the grille. This image will illustrate a collection of clothing and accessories called Bear Witness whose first series of items, a limited edition, will go on sale this May 6, 2022 at 6:00 p.m. French time on the wiill.i.am official website.

Part of the money raised will be donated to the i.am/Angel Foundation organization to enable teenagers to train for jobs of the future.

The creation of the Mercedes Will.I.AMG was the subject of a six-part documentary film titled Drivewho will be presented out of competition at the 2022 Cannes Film Festival to take place from May 17 to 28.

Mercedes T-Class (2022) price. How much for Kangoo’s cousin?

Mercedes EQS SUV (2022). On board the premium electric SUV

Mercedes EQXX. On board the electric car with a range of 1,000 km!