How Tears Can Transmit Diseases

During an eye test, the eyes can expel tear droplets carrying viruses like SARS-CoV-2. 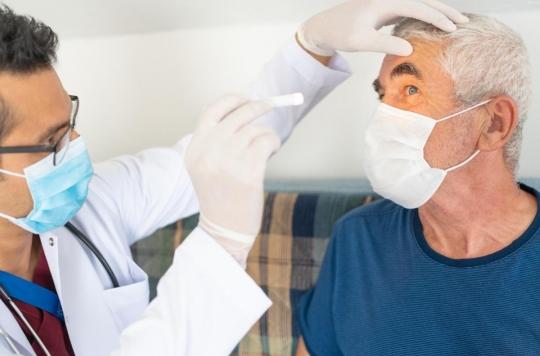 A virus can be present in places you don’t suspect. In the case of Covid-19, Indian researchers demonstrate that it can be present in tears, and be transmitted during eye tests. Their work has been published in the journal Physics of Fluids.

A finding made during a glaucoma screening test

Scientists were interested in one test in particular: the glaucoma test. During this, ophthalmologists use a tonometer to measure the pressure in an eye. High pressure may indicate a risk of developing glaucoma. To carry out this measurement, the instrument emits a puff of air which strikes the surface of the eye: this would cause the expulsion of droplets.

Droplets that can be expelled a meter away

The researchers modeled the eye’s response to this puff and took high-speed images of the eyes undergoing the procedure. When the eye is hit by the puff of air, the film of tears on the surface expands and spreads over the eyelids. “The cornea is like an elastic surface. So as it deforms and springs back into shape, it kind of kicks the eye“, details the author of this research, Saptarshi Basu. This generates kinds of waves in the eye, which move, so the tear fluid ends up becoming unstable and the tears break into droplets. The team followed the speed of these droplets when they leave the eye. They estimate that they could travel up to one meter from the patient. The distance would depend on the airflow in the room. In this experiment, the eyes with more tears created more droplets than dry eyes.

What precautions should be taken?

“What you think is a very safe no-touch procedure requires a bit of caution“, emphasizes Saptarshi Basu. To reduce the risk of transmission of the virus, the authors of this study recommend not to use eye drops before the glaucoma test, unless it is medically necessary. They also specify that these observations are valid for d “other types of viruses. These results should help eye care professionals develop new health safety protocols: “such as better room ventilation and cleaning of nearby instruments and surfaces, which may not have been considered necessary in the past“, conclude the scientists.

Covid-19: the Academy of Medicine is concerned about the neurological consequences

Covid: does the rebound threaten summer?

North America: an epidemic of hepatitis A caused by organic strawberries?