Health: Balance on one leg is an indicator

Can you balance for 10 seconds on one leg? It could be an indicator of your health. 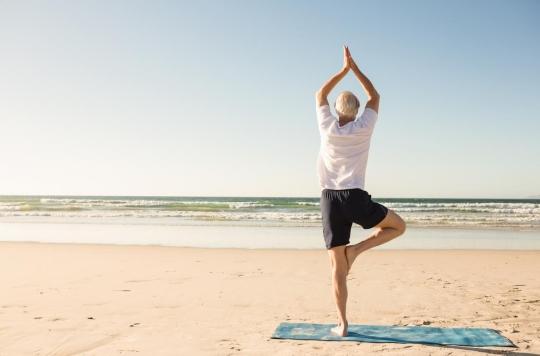 “Balance declines rapidly after age 50, increasing the risk of falls and other health problems,” wrote an international group of researchers in a study published in the journal British Journal of Sports Medicine June 21st. As part of this work, the team wanted to know if a balance test could be a reliable indicator of a person’s risk of death from all causes within the next ten years.

To carry out their research, the scientists analyzed data from the “CLINIMEX” cohort. The latter concerns 1,702 people aged 51 to 75 between February 2009 and December 2020. The weight and several measurements of the thickness of the skin folds as well as the waist circumference were recorded. The authors asked the volunteers to stand on one leg for 10 seconds without any additional support. To improve the “test standardization”, adults were instructed to place the front of their foot on the back of the opposite lower leg, while keeping their arms at their sides and gazing straight ahead. A total of three tries on each foot were allowed.

About one in five volunteers, or 20.4%, failed the test. The failure rate increased with age. According to the results, more than half of people aged 71 to 75 were unable to take the test. Put simply, patients in this age bracket were more than 11 times more likely to fail the test than those just 20 years younger.

According to the researchers, the inability to balance on one leg for 10 seconds was associated with an 84% increased risk of death from all causes over the next decade. During the 7-year follow-up, 123 people died: 32% from cancer, 30% from cardiovascular disease, 9% from respiratory disease and 7% from a complication linked to Covid-19.

According to the team, this balance test deserves to be included in the examinations and health checks of the elderly. “It provides rapid and objective feedback for the patient and healthcare professionals regarding static balance and adds useful information regarding mortality risk in middle-aged and older men and women,” the authors said in a statement.