Fuels. Why is diesel now more expensive than gasoline? 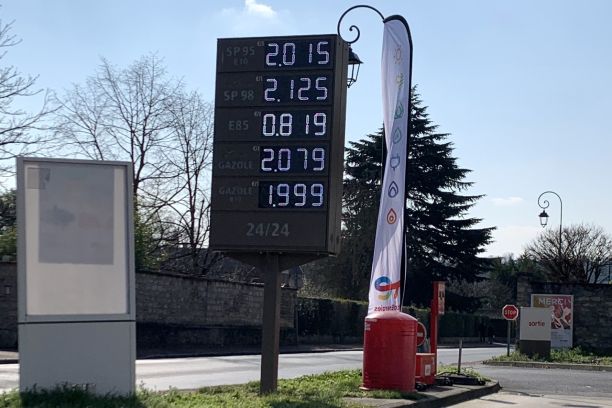 The price of diesel exceeds that of SP95-E10 and sometimes crosses the threshold of 2 €/L.

An extremely rare phenomenon, the price of a liter of diesel at the pump has exceeded that of 95 E10 unleaded petrol. The war in Ukraine partly explains this crossing of the curves, but other factors contribute to it. Decryption.

Fuel prices at the pump continue to break record after record, week after week. According to the latest official figures, a liter of diesel is displayed on average at €1.88, that of SP95-E10 at €1.87 and that of SP98 at €1.96. You read correctly, diesel is more expensive than unleaded 95 E10. In some stations, it exceeds 2 €/L. This situation had already occurred just before the Yellow Vests crisis in the fall of 2018, but at the time diesel demanded “only” €1.46/L. And at just under $140, the price of a barrel of Brent (North Sea crude oil serving as a benchmark), while very high, remains below its record high of $146 reached during the 2008 financial crisis. However, prices at the pump in France are much higher than at the time. The current tariffs are explained by the war which is prolonged in Ukraine, but not only.

As regards the relationship between the price of crude oil and that of fuels in France in particular, one of the main factors is the exchange rate between the euro and the dollar. The course of the euro has fallen against the dollar in recent years, but oil is paid for in dollars and therefore becomes more expensive for the countries of the Euro zone. At the same time, the TICPE (Domestic Consumption Tax on Energy Products) on fuels has seen several increases, more significant for diesel than for gasoline.

Rising prices, but no shortage

The impact of the Russian invasion in Ukraine on prices at the pump in France is at two levels. On the one hand, Russia being the second largest oil producer and exporter in the world, the risks on supply linked to the conflict are driving up prices. ” Without the war in Ukraine, the price of a barrel would probably be 90 or 95 dollars today », estimates Olivier Gantois, president of the UFIP (French Union of Petroleum Industries). Nevertheless, France is not very dependent on Russia for its crude oil, 99% imported but from various sources. Russian crude accounts for around 10-15% of our imports, compared to around 30% Europe-wide

In the event of a French or European embargo on Russian oil like the one just announced by the United States, or of a cut in exports by Moscow, this proportion could be found elsewhere. ” The Russians would then sell more oil to less hostile countries such as China or India, which would supply less elsewhere such as the Middle East, which would free up barrels there that France could import to compensate », Explains the representative of oil companies in France. According to figures for 2020, oil is the source of 42% of the energy consumed in France each year, and 98% of it is used in transport. This represents 50 billion liters of fuel. But those big numbers only account for 1% of oil purchases globally.

TO READ. Germany wants to save the thermal with synthetic fuels

A quarter of imported French diesel comes from Russia

However, Russia does not just export crude oil. It also supplies France with already refined diesel, in other proportions since imports of this fuel are 25% of Russian origin with us, or 6 million tonnes out of the 25 million imported annually. On the Rotterdam market, which governs oil prices in Europe, the price of a liter of diesel rose from €0.64 to €0.77 between February 25 and March 4, while that of SP95 rose from €0.63 to €0.68. ” Accounting for only 1% of purchases, France does not have the power to change international oil prices “, underlines Olivier Gantois. Over the last month, the average price of a liter of HT diesel has thus increased by €0.17 to reach €0.96, while that of SP95-E10 has increased by €0.12 to settle at €0.89. In just one week, the price including tax has increased by €0.14 per liter of diesel to reach its current rate. The taxes (VAT at 20% + fixed TICPE + VAT on the TICPE), unchanged, represent almost 60% of the final price.

Several distributors agree that the rise in fuel prices will continue in the short term, particularly for supermarkets. Michel-Édouard Leclerc expects an increase of ten centimes per liter by mid-March. Its competitor Dominique Schelcher, president of System U, also plans a sharp rise ” in the coming days.

Essential oils: why are some so expensive?

Fuels. Do you know the car that runs on coffee?

Ethanol or LPG? Strengths and weaknesses of the two low-cost fuels

Fuels. Diesel too expensive, can we run on cooking oil?

Lyon wants to ban diesel in 2025: the link between fine particles and cancer is proven