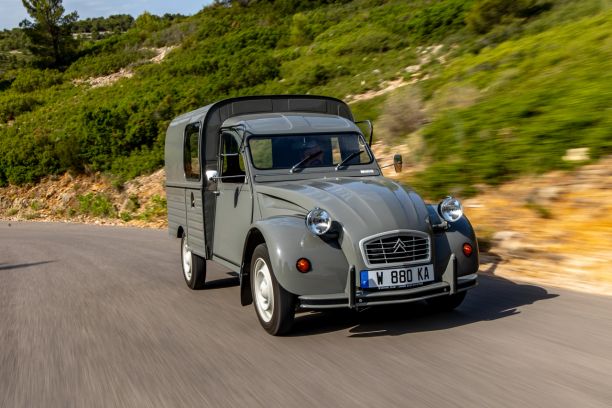 Since 2021, the Méhari Club Cassis has been offering a retrofit allowing the installation of an electric motor in the legendary 2CV. The kit is now suitable for the van version, ideal for quiet retro-chic deliveries. The test is essential!

Replacing the famous flat twin of the 2CV and its characteristic sound with an electric motor, sacrilege? Some “deuchistes” will always be reluctant to this idea, while others will see it as an opportunity to bring a car out of the family barn by freeing themselves from the maintenance constraints of a heat engine. ” There is a very strong sensitivity to the line of the 2CV in the public. She triggers a smile. But thermal motorization is associated with a form of complexity, while electric represents simplicity and ecology. explains Stéphane Wimez, co-director general of the 2CV Mehari Club Cassis.

The company, which celebrates its 40th anniversary this year, knows how to motorize Deuches with all the original parts, produced new in their real small artisanal factory in Cassis with 70 employees. But she has also known how to make them go electric since last year with the R-Fit kit, first homologated since the appearance of regulations authorizing retrofitting. A costly official process which requires maintaining the same maximum power, the same mass balance (at +/– 10%) and the same total weight (at +/– 20%).

For the 2CV, a strong synchronous brushless motor with 78.5 Nm of torque (about twice that of the heat engine) was chosen, signed by the American Motenergy. It is coupled with the original gearbox, which allows its differential to be retained. This box remains functional, but the first speed is condemned because of the increase in engine torque for which it was not designed. The kit also includes a 10.7 kWh battery, its charger and the whole management electronics. It must be mounted in the network of approved installers of the club.

After the classic 2CV, here comes the turn of its van version, ideal for charming customers during original deliveries in nostalgic format. One of the first to succumb is also a renowned buyer: it is the domain of Miraval, prestigious producer of rosé wines belonging to Angelina Jolie and Brad Pitt. So classy !

Price of the 2CV Van R-Fit

The 2CV Fourgonnette has become a sought-after car, whose sustained price can exceed 20,000 € in concours condition. Two solutions are available to those who would like to drive with this electric version. The first consists of carrying out a retrofit on a car in their possession, provided that it is an AK400 (or AKS) or AK350 (AK-AH or AK-B types) model, which came out of production between 1968 and 1978. It will then cost €14,900, installation and labor included. (€1,000 more than for the classic 2CV), to equip their van. An operation that lasts three days. This bill will be reduced in most cases by various aids in place (€5,000 at national level for a VU, plus certain regional subsidies) making it possible to generally go below €10,000.

The other possibility is to opt for the purchase of a new model, like the one in our test, which was used for approval. But the price of €40,000 is greedy for a vehicle that is all in all very rustic, which puts it in front of many much more prestigious old ones. In any case, it will not be possible to keep a collection gray card, but the retrofitted 2CV will be entitled to the mention “electric” on the energy line, which gives it access to the ZFE.

Getting behind the wheel of the Deuche obviously means taking a trip back in time. Everything contributes to this: the improbable driving position with the high and very horizontal steering wheel, the micro-pedals on either side of the steering column, and the steering, which is surprisingly light when stationary and heavy as soon as the we roll. The loose suspensions that absorb the recumbents without flinching and the pronounced body roll are also part of the ride. And then there are those tiny wipers… but right in the field of vision! l Braking is not the most reassuring, and you learn to handle the gearbox, mainly the third which is sufficient for normal driving up to 80 km/h at which the car tops out. In second, it is possible to cross the stronger coasts.

At start-up, a slight jerk is felt. Then the changes happen smoothly, with a slight shrill noise, far from the hum of the original engine. In town, the small electric van is lively enough to fit well in traffic. On the road, however, with barely 20 hp of power for around 700 kg, we pass into another dimension, located below the speed of normal traffic. The times are laborious, and the speed is very limited uphill. Anticipation is the key word!

You have to take your pain patiently. Our valiant van may seem brand new, but its level of performance (is that the right word?) and its rustic driving make it more suitable for occasional use than intense delivery rounds. But whatever. Windows folded on the outside, elbow to the door, the charm acts immediately. Anyway, the autonomy of the car is limited to 90 real km with its small lithium-iron-phosphate battery of 10.7 kWh (weight: approx. 80 kg). This chemistry was chosen for its ability to hold the charge even after a long period without driving (90% after six months of inactivity), but also for its safe and reliable aspects. Recharging is done in 3 h 30 on a 220 V socket with the optional Fast charger (3.3 kW instead of 1.5 kW, €900). The battery is guaranteed to retain 80% of its capacity after 2,000 charge cycles, which equates to around ten years depending on the brand.

The simple fact of getting behind the wheel of a 2CV is one of the essential automotive experiences. A leap in time that allows us to measure the incredible progress made throughout history, including for entry-level models. Truly rustic and basic, the Citroën loses only part of its soul by going electric, keeping a period drive full of charm. But from a popular car, it became a luxury item, and it is perhaps on this level that its philosophy is most distorted today.

Alzheimer’s: a blood test to identify people at risk