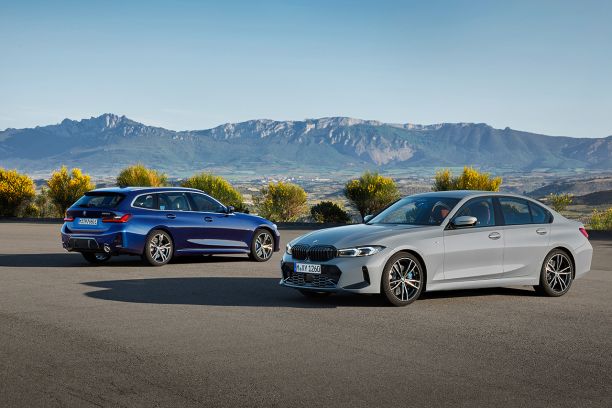 The restyled BMW 3 Series Sedan and Break will be marketed in France from July 2022.

Faced with the Mercedes C-Class launched last year, the BMW 3 Series dating from 2018 showed the weight of the years. Here is a restyling that puts it back in the saddle cosmetically on the outside and fully plays the digital card on board. Discovery of the sedan and the station wagon.

Presented in the fall of 2018, the seventh generation BMW 3 Series, internal code G20, is now going through the restyling box. It will be available in sedan as in break (BMW Series 3 Touring) on the French market from July 2022.

TO READ. The restyled BMW 3 Series shows itself in advance

A little iX look, but not too much

The cosmetic operation is extensive, especially concerning the front and rear bumpers. These adopt a new formal register, including facets and false L-shaped scoops. The bow offers a central air intake which gains in volume and whose hexagonal contours mimic the Singleframe grille dear to Audi. Just above, contrary to what one might have feared, the nostrils retain a reasonable size, which is a good omen. The Series 3 did not follow the example of the Series 4.

The edge of the headlamps has been softened to better highlight what is happening inside. No more cutting in the lower part, which could evoke certain Peugeot achievements. Full LED headlights become the norm, while the light signature takes on an inverted L shape. On the other hand, no change is to be reported at the level of the taillights, which had an L-shaped visual pattern from the start. Pure Gray and, for those allergic to grey, Frozen Tanzanite Blue, the launch color of the restyled Series 3 Touring station wagon. 17-inch wheels are standard from entry level, while the M Sport versions are based on 18-inch wheels.

Infotainment on the big screen!

In the passenger compartment of the restyled BMW 3 Series, the furniture is changing in depth. The entire dashboard cover has been revised to to integrate the BMW Curved Display device, which appeared on electric models BMW i4 and BMW iX. Exit architecture with undercover instrumentation. Make way for a curved panoramic slab in one piece bringing together the instrumentation on a 12.3-inch screen in front of the driver and, in continuity, a touch screen of almost 15 inches (14.9 to be precise). This has its effect, and BMW saves money!

In the process, the iDrive knob has been redesigned, while the eight-speed automatic gearbox lever, standard on the entire range, is replaced by a mini-trigger. It is therefore impossible to confuse the BMW 3 Series G20 phase 1 and this new phase 2, which is gaining in modernity. This brings a serious blow of old to the rival Audi A4, at the end of its career. Thus equipped, the restyled BMW 3 Series can once again stand the comparison in terms of digital endowment with its other competitor, the recent Mercedes C-Class. In terms of driving aids, the car is full with, as standard, everything the range required to offer level 2 semi-autonomous driving and, as an option, cruise control with stop & go function, detection of traffic lights, parking assistant capable of reversing a journey made previously or the head-up display again.

A wide choice of engines

Finally, concerning rechargeable hybridization, the 320e and 330e will always be at work with a total of 204 hp and 292 hp respectively. In addition, if in most cases the BMW 3 Series must remain faithful to the propulsion, the xDrive all-wheel drive will be delivered automatically on the six-cylinder blocks (330d, M340d, M340i and 330e). Four-wheel drive will also be offered as an option on the four-cylinder 320d and 320i. Pricing for the facelifted BMW 3 Series will start at €42,600 for the sedan and €44,800 for the station wagon. Prices that will easily exceed 70,000 € on the most upscale versions, without even taking into account the ecological penalty.