A long-term dietary supplement of choline, a nutrient classified in the group of B vitamins, could mitigate the effects of Alzheimer’s disease. 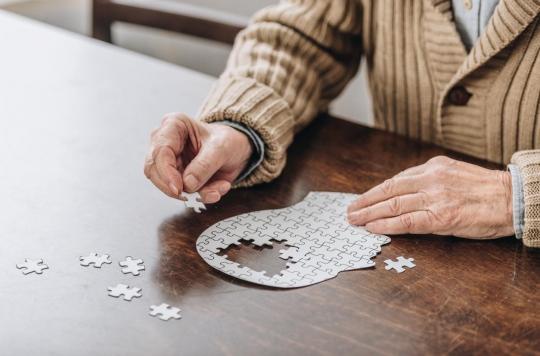 More than 35.6 million people are affected by Alzheimer’s worldwide and 7.7 million new cases are diagnosed each year, according to the WHO, which warns of the growing increase in the disease. Indeed, the number of people affected should double every 20 years to finally reach 152 million in 2050. Also, many researchers are working to better understand the disease to try to develop more effective treatments. According to a study published on September 27 in the journal Aging Cella long-term supplement of choline, a nutrient classified in the group of B vitamins, could lessen the effects of the disease.

A few months ago, working on mice, Ramon Velazquez and his colleagues from the ASU-Banner Neurodegenerative Disease Research Center (NDRC) at the University of Arizona (USA) discovered the trans-generational benefits of choline in children whose mothers with Alzheimer’s-like symptoms received a dietary supplement. They therefore wanted to study the effects of this nutrient on adult mice. In addition, a Chinese study published this summer having revealed the benefit of lifelong choline supplementation in male rodents showing symptoms of Alzheimer’s, Velazquez and his colleagues also wanted to observe if it worked in females, the women being generally more affected by the disease.

By placing mice in a water maze, the researchers found that those with Alzheimer’s-like symptoms who received a choline supplement throughout their lives had better spatial memory than those fed normally. Then, by studying tissue extracted from the hippocampus, a region of the brain known to play a key role in memory formation, they identified changes in toxic beta-amyloid, the hallmark pathology of Alzheimer’s, and reductions in microglial activation.

Food for thought for multiple sclerosis or Parkinson’s

These are specialized cells that rid the brain of harmful debris. Although they occur naturally to keep the brain healthy, if overactivated, brain inflammation and neuronal death, common symptoms of Alzheimer’s, occur. Thus, choline supplementation provides protection against disease.

“No one has shown lifelong benefits of choline supplementation in female mice with Alzheimer’s. That’s what’s new in our work,” says Velazquez. Also, the simple addition of choline in the diet throughout life can reduce pathology in women, who are more likely to be affected. These findings also have implications for other neurodegenerative conditions where activated microglia are endemic, Velazquez says. The reductions observed in the latter offer, for example, new avenues for treating disorders such as multiple sclerosis or Parkinson’s.

This study is not the first to highlight the importance of diet in preventing the development of Alzheimer’s disease. In particular, it has already been proven that the Mediterranean diet, rich in vegetables, olive oil, whole grains and fermented dairy products, protects the elderly from cognitive decline.

Here, a choline supplement seems relatively simple to put into practice in the prevention of Alzheimer’s. “At 4.5 times the RDA (recommended daily allowance, in the United States), we are well below the tolerable upper limit, which makes it a safe preventive therapeutic strategy”, note the researchers. Indeed, the tolerable upper limit of choline, i.e. unlikely to cause side effects in adult women and men, is 3500mg/day, which is 8.24 times more than the American recommendation of 425mg/day. day in women and 6.36 times more than the 550mg/day recommendation in men.

In France, although it is recognized that choline plays a key role in cell structure and transmission, in lipid transport and metabolism, in DNA synthesis and to have a healthy nervous system, due to a lack of available data, the value of the daily intake of reference has not been set. However, in order to avoid deficiencies, the Institute of Medicine has set a value for an adequate intake (AI), similar to the American recommendations: 425 mg per day for women and 550 mg for men.

Choline is present in many foods, especially chicken liver, beef steaks, eggs and milk. But vegans can be reassured, they can also find it in Brussels sprouts or wheat germ. What’s more, vitamin supplements containing choline, such as choline bitartrate and choline chloride, are readily available at an affordable price.