A team of doctors discovered 18 pieces of magnetic beads that had accumulated in the stomach of a 4-year-old child, requiring emergency surgery. 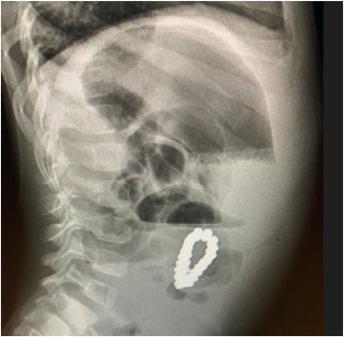 A somewhat special case of object ingestion was reported by the New York Post. A 4-year-old boy who complained of intense colic was brought to the emergency room. While looking for the origin of his illness, the doctors had the great surprise to discover no less than 18 pieces of magnetic balls in his stomach. Urgent surgery had to be performed.

“A 4-year-old boy presented with colicky periumbilical abdominal pain present for 2 days. Multiple episodes of vomiting and constipation were associated. There was no abdominal distension”develop the doctors in the article summarizing this case which will be published in February 2023 in the Journal Of Pediatric Surgery Case Reports.

The interns initially thought it was acute appendicitis and therefore decided to remove his appendix. However, the stomach pains and vomiting continued in the days following the surgery. After performing an abdominal X-ray, the team quickly realized that the problem was not the appendix but a cluster of magnetic balls lodged in the abdominal cavity. The parents were not aware since they did not see their child swallow these elements.

“Our patient ingested 18 pieces of hexagonal shaped magnetic beads over an unknown period of time but due to their identical shapes they were able to attract and align with each other to form a clump causing obstruction of the small intestine”summarize the doctors.

Very quickly, they proceeded to an emergency laparotomy. This operation consists of opening the abdomen in order to remove the bracelet made up of 18 hexagonal magnetic balls which were aligned. During the operation, the doctors also sewed up the holes caused by the bracelet in the intestinal wall of the child. The little patient was able to return home six days later, without sequelae, as confirmed by the follow-up appointment six months later.

At a similar incident in 2020a 5-year-old child in China had meanwhile swallowed 123 magnetic beads – which had to be removed from his stomach in a four-hour operation.

Suffering from excruciating pain, this teenager found his charger… in his stomach

Unusual: a man gets a jump rope stuck in his bladder

Epilepsy: at 4 years old, he saves his mother in the midst of a crisis

Your brain may age differently depending on your child’s gender

A little boy was finally able to go home after 1,000 days in hospital

A hernia operation, a little boy undergoes a vasectomy

She thanks a little boy for playing with her disabled son

Mom of a little autistic boy, she is humiliated on the plane

Jean-Luc Bosson: “The electric bike allows people to practice on a daily basis”