Toyota Corolla (2023) test: the compact hybrid is being refined 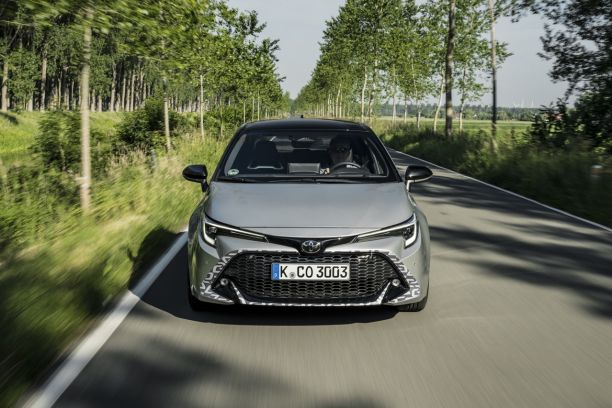 First drive of the restyled Toyota Corolla. But you will have to be patient to take delivery because the launch begins in France in February 2023.

The Toyota Corolla goes through the restyling box, modernizes its equipment and receives the fifth generation of the house hybrid system. We tested a pre-production model of the 1.8 version, which now achieves 140 hp thanks to a more powerful electric motor.

Since its arrival in 2019 to replace the discreet Auris, the Toyota Corolla has been successful. Its more dynamic style and especially its hybrid system propelled it to second place in the compact category in Europe in 2021, behind the Volkswagen Golf, but ahead of the Opel Astra, Peugeot 308 and Renault Mégane. A great performance when you know that the Corolla is the only one in its segment to only offer hybrids in its catalog.

For its restyling, the Corolla does in small doses on the visual side. The new grille, revised light signatures and new rim designs make up the bulk of the changes with two new body colors: Geneviève blue and Atlas gray (model pictured). What happens in the cabin is more interesting, with an updated multimedia system since the new 10.5-inch screen is finally responsive, fluid and very clean thanks to a new operating system shared with the bZ4X SUV.

It is especially under the hood that you have to look because the Corolla is the first Toyota to receive the fifth generation of the hybrid system home, the first opus dating back twenty-five years with the Prius. The main change is the adoption of a new, more powerful electric motor on each of the versions: 95 hp for the 1.8 and 113 hp for the 2.0 against 72 and 109 hp previously. To achieve this, the lithium-ion battery has increased its capacity (no figure given but estimated at 1.2 kWh on the 1.8). The latter is also lighter (– 16 kg on the 1.8 version and – 18 kg on the 2.0), and its smaller size has allowed the integration of a system aimed at better controlling its temperature.

There is no change on the thermal engines, but with the stronger electric block the cumulative powers are progressing: 140 hp for the 1.8 (vs 122) and 196 hp for the 2.0 (vs 184). Good news, consumption remains unchanged, so still low in the context of city and road driving. We took the wheel of a pre-production Corolla 1.8 GR Sport, as highlighted by its colorful stickers on the shields.

If the central screen is the attraction when you get behind the wheel of the new Corolla, we must also highlight the new fully digital handset spanning a 12.3-inch slab. You can choose different displays (double counter, cartography, etc.), and there are now an indicator of time spent in electric mode. The latter is very instructive. For example, on an urban trip, it told us 73% in EV, which means that the combustion engine only remained on for 27% of the trip time.

The new generation of the hybrid system does not touch its fundamentals, and the epicyclic CVT type box is renewed without change since it is a pillar of energy efficiency for Toyota. The defect of this transmission is known, with the runaway of the combustion engine (and the noise that goes with it) when restarting a little dynamically, such as when entering the fast lane. With each development, Toyota nevertheless manages to stem the phenomenon a little. This is the case here thanks to the higher electrical power of the system, which more effectively supports the internal combustion engine. However, progress is marginal, and it will therefore be necessary to deal with this inconvenience which is especially annoying at the beginning and when driving in mountainous areas. Fans of dynamic cars and responsive engines will therefore still go their way or head for the 2.0, which is less penalized by this slippage problem.

The progress of the Corolla 1.8 is however to be highlighted with a 0 to 100 km / h which grabs almost 2 seconds (9.2 s). This gain in performance does not come at the expense of consumption, which remains low. Ditto for CO emissions2 (102 g/km as on the current 122h version). In normal driving in town and on the road, it is therefore easy to stay between 5 and 6 l/100 km, an unbeatable figure and always appreciable in these times of expensive gasoline. On the highway, the hybrid system is less festive, but we were not able to test this course during this brief handling of the 2023 Corolla. However, we again appreciated the general approval of this Corolla, which is balanced on the road with its precise steering and its accommodating damping, two points on which Toyota has made minor improvements.

This test of the prototype of the new Corolla comes well ahead of its marketing, since the launch of the car is scheduled for February 2023. You will therefore have to be patient to take delivery of your vehicle, and the prices for the new range do not are not yet established. As an indication, the price of the current model is between 30,300 and 36,600 €. It will be necessary to count on a tariff inflation taking into account the equipment and the powers in progress. But very smart whoever can quantify it today in the context of a general increase in the price of new cars.

The only certainty is that Toyota’s simple hybrid solution helps to contain prices compared to models equipped with expensive plug-in hybrid technology. And the competition is thin on the simple hybrid: the aging Hyundai Ioniq of 141 hp will try to give the exchange to the Corolla 1.8 of 140 hp, while the new Honda Civic hybrid of 184 hp will cross swords with the Corolla 2.0 of 196 c.

Despite its increased electric power, progress at the wheel is marginal. But the Corolla will remain a first choice in 2023 with its low fuel consumption, its comfort and its modernized interior presentation. The Japanese especially keeps for it the advantage of simple hybridization more accessible and easier to use than the rechargeable hybrid technology chosen by many of its competitors. The station wagon named Sports Touring, appreciated in France with 58% of sales, obviously benefits from the new features in the range.