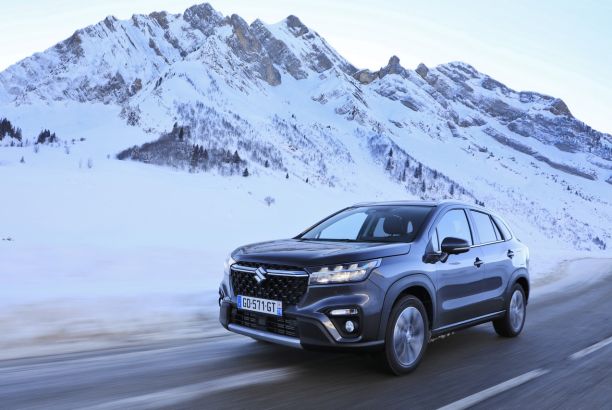 We tested the second generation Suzuki S-Cross Allgrip in Savoie, in winter conditions.

The Suzuki S-Cross is renewed without changing profoundly. It is progressing on the expected points, while maintaining a good level of equipment but also generous roominess for young families who want to go straight to the point and take advantage of an Allgrip transmission.

In the Suzuki SUV range, there is the inevitable Vitara with its city-dweller size and the large Across with plug-in hybrid technology. Between the two, the S-Cross is less known despite having been in our market for nine years. The year 2022 marks the arrival of the second generation of the model, and the change can be seen. The high hood and the large, better-integrated grille offer to the Japanese adventurer a more robust and harmonious facies. The pencil stroke is, on the other hand, less happy on the rear part with lights that seem disproportionate.

While all body panels are new, the technical basis is that of the old model. The S-Cross also retains its size of 4.30 m which places it on the upper edge of small SUVs, such as the Peugeot 2008. The vehicle also renews its unique 1.4 Boosterjet Hybrid engine of 129 hp, whose name Hybrid is somewhat overused because it is here a micro -48 V hybridization which does not provide the same services as a full hybrid system. This engine is available in a manual or automatic gearbox, with an Allgrip two- or four-wheel drive transmission. A rare choice in this category.

The first price of the S-Cross 1.4 Boosterjet stands at €27,090 in the Avantage finish, while a well-equipped version like the Privilège (see all the equipment on page 2) remains below the €30,000 mark. The prices for the 4 x 2 versions are not affected by the malus, but they are no longer as cheap as they once were. Moreover, Suzuki France is offering a launch discount of €3,500 on all versions during the first quarter of 2022.

Our test model in the Style Auto Allgrip version tops the range at a price of €34,190 before discount. At this price, it’s all-inclusive service with the panoramic sunroof as standard and the new equipment inaugurated by the S-Cross 2022 : 360° camera and multimedia screen of 9 inch HD display with wireless connections to Apple CarPlay and Android Auto. In this high-end version, the S-Cross does not avoid the penalty, but the tax is light (280 €) for a gasoline model with automatic transmission and four-wheel drive.

The presentation of the driving position appears a little dated compared to what the competition offers, but the advantage is that it is easy to find its marks. Information is clear and all controls are easy to understand. It is ultimately a plus against rivals who have made their dashboard more complex. Despite revised running gear compared to the old model, the chassis does not shine with its precision and dynamism. But the Japanese defends its positions with comfortable suspension and considerate demeanor. The good peripheral visibility induced by its large glass surfaces is pleasant, and some competitors would do well to take inspiration from it rather than reduce the size of the windows for the benefit of style. Suzuki doesn’t care, preferring ease of use to fads.

Thanks to its contained weight, the S-Cross is satisfied with the 129 hp and 235 Nm of its engine to offer honorable performance. The four-cylinder is, in addition, supported by the micro-hybridization system which delivers a slight boost effect (10 kW – 53 Nm) at low revs in favor of flexibility. In relation with the six-speed automatic transmission of Aisin origin, the whole benefits from a great smoothness of operation, and the law of passage of the reports reacts advisedly. It should be noted that the light hybridization of the S-Cross Boosterjet never allows the car to be towed solely by the force of the electric motor. It does not equal in this the full hybrid system at work for example on the Toyota Hybrid or Renault E-Tech. The 48 V system simply allows you to benefit from a few cut-off phases of the heat engine at stabilized speed and the Stop & Start to be fast and discreet. The S-Cross will later receive a true full hybrid engine with a house system with a power of 115 hp, currently reserved for the Vitara.

On the consumption side, the WLTP mixed value is set at 6.1 l/100 km, and we observed 7.4 l/100 km on our mountain route, which is not necessarily representative. This trip, however, allowed us to highlight the Allgrip all-wheel drive, a rare offer at this level of the range and very popular in the Alps or in Auvergne. There, Suzuki also achieves its best market share thanks to this technology present on the S-Cross, Vitara, Swift and Ignis.

This four-wheel drive transmission is not permanent to preserve consumption, and it sends torque to the rear axle via a viscous coupling as soon as a loss of grip is detected at the front. The Allgrip system also offers pre-selected programs, such as Sport mode which favors torque to the rear, Snow which preemptively distributes torque to both axles, and Lock which blocks a 50-50 distribution to get out of a misstep at low speed. On the slippery and sometimes snowy roads, the S-Cross 4 x 4 proved to be at ease, also helped by its winter tires mounted for the occasion.

The S-Cross leaves its rustic interior for a slightly more up-to-date presentation. The change is especially visible in the central part of the furniture with a new screen installed at the top of the dashboard. With a size of 7 or 9 inches, it incorporates a new interface which will be deployed on the other models in the range. The menus are intuitive, and it’s easy to find what you’re looking for. But the screen is not very responsive.

The strong point of the S-Cross remains its habitability, and there is a good width at the elbows at the front. The rear passengers have enough to stretch their legs and benefit from a reclining seatback. The large glass surfaces benefit from the light, which is not lacking in this Style finish fitted as standard with the panoramic sunroof. Good point also on the side of the trunk, which enjoys wide access, a threshold not too high for an SUV and a modularity allowing for example to have a perfectly flat loading surface when the car is in “station wagon”. Seat in place, the trunk volume of 430 liters remains sufficient for a young family.

In the 4.30 m size of the S-Cross, the competition takes different forms. The segment leader, the Peugeot 2008, has the same length. If it displays a more modern design and similar prices, it offers on the other hand less space for the rear passengers and obviously does not have a 4 x 4 transmission. The real asset of the Suzuki is precisely its Allgrip transmission, which has become almost impossible to find in this segment, except at higher prices. Count at least €40,000 for a Volkswagen T-Roc TDI 150 4Motion, admittedly much more chic, and €38,000 for a Nissan Qashqai 4 x 4 Tekna, which is on the upper floor in terms of dimensions. But the S-Cross falls on a bone with the Dacia Duster, available at a price of €23,200 in a top-of-the-range Privilege finish with 115 hp diesel and 4 x 4 transmission. The Romanian does not, however, offer the automatic transmission combination and four-wheel drive like the Japanese.

Find the results of the test, the technical sheet and the equipment on the next page.