Obesity: asthma is caused by an accumulation of fat in the airways

Adipose tissue that accumulates in the respiratory walls of obese people may explain why they have more asthma problems, according to a new study. 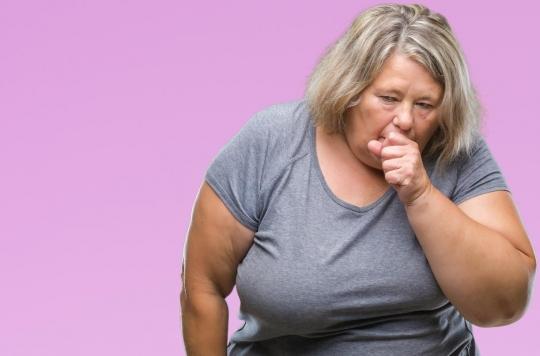 Globally, the number of cases of obesity has almost tripled since 1975. According to WHO, in 2016, more than 1.9 billion adults were overweight (BMI equal to or greater than 25). Of this total, more than 650 million were obese (BMI equal to or greater than 30). We know that being overweight can lead to cardiovascular disease or even type 2 diabetes. It has also been proven that obesity can lead to wheezing and asthma problems, although we don’t know why. However, according to a new study published in theEuropean Respiratory Journalthis could be explained because adipose tissue accumulates more in the respiratory walls of overweight and obese people, changing their structure.

The researchers examined post-mortem samples of lungs from 52 people stored at the Respiratory Tissue Biobank. Of these people, 15 had no overt asthma, 21 had asthma but died of other causes, and 16 died of asthma. Using dyes to visualize airway structures under a microscope, they were able to identify and quantify any fatty tissue present and compared this data with each person’s BMI.

They then found that fatty tissue was accumulating in the respiratory walls and that this amount of fat increased as a function of BMI. Another interesting observation: it seems that this increase in fat changes the normal structure of the airways and leads to inflammation of the lungs.

Reverse the phenomenon through weight loss?

“Being overweight or obese has been linked to asthma or more severe asthma symptoms. The researchers speculated that the link could be explained by the direct pressure of excess weight on the lungs, or a general increase in inflammation created by excess weight. This study suggests that another mechanism is also at play. We found that excess fat accumulates in the walls of the airways where it takes up space and appears to increase inflammation in the lungs. We think this causes a thickening of the airways that restricts airflow into and out of the lungs, which could explain, at least in part, an increase in asthma symptoms,” explains Dr Peter Noble, study co-author and associate professor at the University of Western Australia in Perth.

Researchers are now looking for new ways to study and measure fatty tissue in the lungs. They want to confirm the link to respiratory disease and see if the effect can be reversed through weight loss.

“This is an important finding about the relationship between body weight and respiratory disease, as it shows how being overweight or obese can worsen symptoms in people with asthma. This goes beyond the simple observation that obese patients need to breathe more with activity and exercise, which increases their ventilatory load. The observation shows the actual airway changes associated with obesity. We need to investigate this result in more detail, and in particular to determine whether this phenomenon can be reversed by weight loss. In the meantime, we should support asthma patients to help them achieve or maintain a healthy weight”, comments Professor Thierry Troosters, President of the European Respiratory Society, on the sidelines of this study.

Currently, obesity is a public health issue. According to an OECD report published on October 10, this disease would cause a total cost of 425 billion dollars per year to the 52 countries studied. An effective prevention policy could effectively reduce health costs and increase the GDP of the states concerned, say the experts.

This is why, in France, where 6.5 million people are considered obese, i.e. 14.5% of the adult population, the Ministry of Health has placed the fight against this disease at the heart of its 4th National Health Nutrition Program (PNNS) launched on 20 October. Through 55 actions, the latter aims to allow the French to stay in good health throughout their lives thanks to good reflexes to eat and move better.

Parkinson’s disease: what if eating too much fat accelerated the onset of symptoms?

Eating, even a lot, does not necessarily make you fat

Sugar and fat are not necessarily bad for your health

Too much fat quickly unbalances the intestinal flora