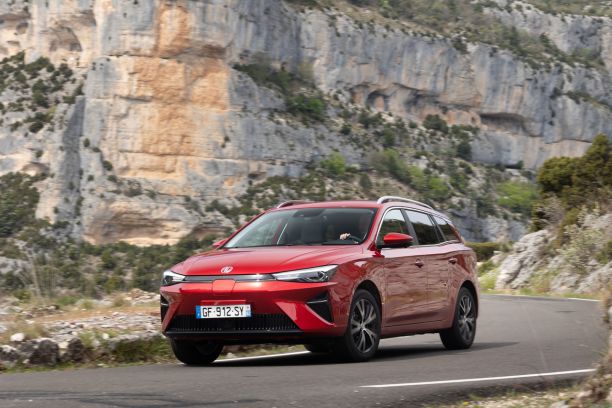 The MG5 break arrived in dealerships at the end of April 2022.

MG completes its range of electric models with the launch in 2022 of the MG5, the first electric station wagon on the market. A model that shines more for its price/performance ratio than for the modernity of its design.

A brand of the Chinese state group SAIC, MG aims to be a truly global generalist manufacturer. After the successful launch of its ZS, Marvel and EHS plug-in hybrid SUVs, it therefore intends to offer the full range of bodies in all categories. Oddly, in that of the compacts, the manufacturer first offers a station wagon, the MG5, before the sedan, which will arrive in the form of a completely new model at the end of the year. Yet in Asia, the MG5 already exists in this form, while the model that concerns us appeared in 2018 in a thermal version in China as Roewe Ei5.

In Europe, this station wagon comes to us exclusively with electric motors. To be able to integrate its batteries which are located in the center of the chassis, below the seats, he adopts a semi-high posture which gives its lines, already a bit dated, somewhat strange proportions. An impression reinforced by the small size of its wheels and the narrowness of its tracks, a common characteristic with the ZS. Moreover, if you take the trouble to look under the chassis, you can clearly see the battery casing which protrudes and is not the subject of any fairing. This inspires a clear feeling of DIY carried out on a platform which was not initially designed for electric motorization.

The price remains the main asset of MG productions and the new MG5 is no exception to the rule. Our top-of-the-range Luxury model is thus billed at €36,990, i.e. €31,990 if we deduct the amount of the bonus of €5,000 applicable from the 1er July 2022. The promise of a compact electric station wagon at the price of thermal is therefore well kept. This is even more true if we consider the price of the entry-level Comfort equipped with the small 50 kWh battery, which is charged € 27,490 bonus included. The extra cost of the large 61 kWh battery is something to think about because it only offers 11 kWh and 80 km of WLTP autonomy more for 3,000 €, which is not cheap. You have to see the price of its chemistry, more expensive than that of the standard version. Note also that it leads to a power drop of 21 hp.

On the other hand, it would be wrong to deprive yourself of the Luxury finish, which for an additional cost of €1,500, offers the 360° camera, automatic air conditioning, rain sensor, sequential windows, electric driver’s seat and rims. 17 inches. A very complete equipment, which is also part of the traditional assets of the brand.

Autonomy and recharge time of the MG5

As we have said, the MG5 is offered in two battery versions: standard 50.3 kWh and extended autonomy of 61.1 kWh, the first announcing up to 320 km of range in the WLTP cycle, and the second, up to 400 km. The MG5 Extended Autonomy actually appeared to us to be a little less greedy than the ZS, claiming 16 kWh/100 km on the road and 24 kWh/100 km on the highway at 130 km/h “GPS” stabilized. We can therefore envisage a real autonomy oscillating between 250 and 380 km depending on use. On the supply side, the MG5 announces 70 kW of maximum charging power for the small battery and 87 kW for the large one, sufficient to recover 80% of the charge in 40 minutes on a direct current fast terminal.

We tried to connect it to two Ionity terminals to check these figures but both times ended in failure, the first failing after connection and the second refusing to communicate with the car. A malfunction that seems linked to our test copy, but it is far from the first time that we have observed significant operating disparities on the brand’s models. The Type 2 Mode 3 cable supplied as standard allows, on an 11 kW public terminal, to recover 80% of the charge in less than 4 hours. The one intended for home charging is charged €268 but on a domestic outlet, a full “full” will require more than 18 hours and 30 minutes.

At the wheel of the MG5 Extended range

On the road, our Luxury model with 17-inch rims benefits from excellent Michelin Premacy tires. Enough to give this station wagon an excellent level of grip despite inefficient damping marked by poor spring/shock absorber tuning, which leads the car to rebound after each slightly pressed compression. The car also exhibits a fairly pronounced body roll due to its raised suspensions. The level of comfort, however, remains correct on well-paved roads but degrades quite quickly on bumpy surfaces. The steering logically offers a higher level of precision than that offered by the brand’s SUVs, but still suffers from a lack of responsiveness.

Despite the 21 hp deficit of the extended range version, the MG5 offers very satisfactory performance, with a 0 to 100 km/h announced in 8.3 s. Its recovery capacity seems sufficient in all circumstances, including on the motorway. The time of electric cars losing their means in this field seems well and truly over. On the other hand, we noted very marked air noises testifying to perfectible aerodynamics.

In the Luxury finish, the MG5 is fitted as standard with adaptive cruise control and semi-autonomous driving. Systems that are lagging behind: they certainly do not show the same brutality as on the Marvel but are singularly lacking in responsiveness, for example when a previous car changes lanes. Finally, on the highway the car plays high-frequency ping-pong with the edges of the tracks, which quickly turns out to be unpleasant.

In the cockpit of the MG5

When you board the MG5, the first surprise is the height of the floor which imposes to have the knees which go up. This is true in the rear as well as in the front seats, which in the long run can lead to unusual back discomfort for those with sensitive backs. Moreover, the habitability in the front can be a problem for the most corpulent, the central console going up very high and the elbow room being limited.

The finish appears very heterogeneous. The plastics of the dashboard do not arouse criticism but there are many questionable choices of materials: here very flashy chrome, there blue plastic decorations that are more of a toy universe than automobile. The light gray textile decorations with blue stitching can also make you smile, especially since they are placed on the door panels in potentially the dirtiest places, while the GPS shortcut keys do not inspire a great feeling of quality. In terms of ergonomics, we regret that the air conditioning is controlled by the touch screen, a solution that has never been proven.

Being a station wagon, the practical qualities of the MG5 are disappointing. The boot only offers minimal modularity: the bench seat backs do not fold down on a flat floor and, although the bench seat is strangely easy to unclip, the electrical wiring secured there prevents it from being positioned against the front seats to flatten the cargo area. On the other hand, the positioning of the batteries benefits it since it offers a normal depth, usable thanks to an adjustable floor. Compared to the first MGs sold in Europe, the multimedia system has progressed well. Despite a fairly narrow screen, the GPS offers correct guidance and the general ergonomics of the menus appear relatively intuitive. On the other hand, some incongruities remain like the impossibility of displaying the phone menu and the navigation at the same time.

As we have said, the MG5 is the first electric station wagon on the market. It therefore has no direct competitor and for the moment, none have been announced in the near future. So you have to look for your rivals on the side of compact SUVs, starting with those offered by its manufacturer. The ZS Extended Autonomy, recently restyled, is offered at €1,500 more expensive but it has a larger 70 kWh battery. More compact (29 cm less), it has the luxury of offering a nine-litre boot volume. There is even more hesitation when considering the standard autonomy version which offers the same battery capacity as the station wagon and is only charged €500 more.

Those who prefer more established brands can consider the Peugeot e-2008 but this one is much more expensive: the sparsely equipped base Active model is thus offered at €33,050 bonus of €5,000 deducted. It’s hard not to mention the electric Hyundai Kona, which remains a benchmark thanks to the efficiency of its engine. Here too, however, you have to make a significant financial effort since it is only offered from €36,200 in the 64 kWh version, always bonus included.

Find the results of the test, the technical sheet, and the prices, equipment, options of the MG5 on the following page.