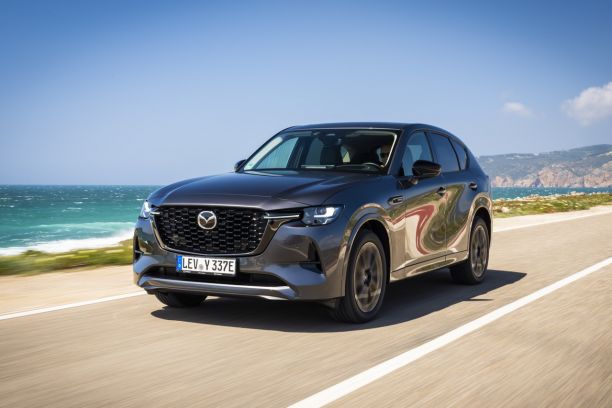 The CX-60 is an all-new model from Mazda. It settles at the top of the range of the Japanese manufacturer.

Mazda is returning to the large SUV segment with the CX-60, which is also the brand’s first plug-in hybrid model. With him, the Hiroshima manufacturer wants to move towards premium, but the road is still long.

The Mazda CX-60 won’t arrive until fall 2022 in France, but the brand invited us to a test of pre-production models to get a first impression of this new vehicle. The latter allows the Japanese manufacturer to have a large SUV in the range, which it no longer had in France since the withdrawal of the CX-7 ten years ago. With its 4.75 m long, the CX-60 is imposing, and Mazda has made it its gondola head to become a premium brand capable of competing with the German trio Audi, BMW and Mercedes.

Designed on an unprecedented multi-energy platform, giving pride of place to propulsion (rear-wheel drive), the CX-60 will be able to accommodate a new 3.3 six-cylinder diesel in 2023. But the decision to market this engine in France has not yet been taken. At launch, the CX-60 will be available with the new 327 hp plug-in hybrid package. The tax reason imposes it, and it is the way to discover the first Mazda engine of this type.

The technology of the CX-60 2.5 e-Skyactiv PHEV (such is its name) is based on a 191 hp four-cylinder petrol engine, a 129 hp powered by a 17.8 kWh battery and an eight-speed automatic transmission. The cumulative power of 327 hp goes to the ground via four-wheel drive thanks to the transmission shaft that connects the two axles. Electric autonomy is approved at 63 km (mixed WLTP), and the battery is refueled in 2 h 30 on a suitable terminal thanks to the on-board charger of 7.2 kW in alternating current.

Pricing will be between €52,650 and €58,050 with four trim levels named Prime Line, Exclusive Line, Homura and Takumi. For the moment, the details of the equipment are not known. Compared to the little brother CX-5, which has no hybrid engine to circumvent the penalty, the new CX-60 avoids taxes: no penalty, no TVS for the pros and free gray card. These tax gifts should not, however, make us forget that in use a large PHEV SUV can be more expensive than a diesel if it is not used properly.

Installation on board has an air of deja vu and this is normal since the dashboard of the CX-60 takes up the principles seen on board the Mazda 3, 6 and CX-5. The presentation is characterized by well-made materials, a design of soothing furniture and a modestly sized screen which is not tactile when the car is moving (in any case, it is placed too far from the driver). Too bad Mazda didn’t take advantage of the launch of its new top-of-the-range model to reinvent its interiors. We can still see the advantage of having good ergonomics of the controls and easy installation at the wheel. You can even enter your height into the computer; the car then adjusts the optimal position of the seat and the steering wheel according to your morphology. But, in our case, we had to redo the setting…

On the occasion of this handling of pre-production models, we only had the right to travel a few tens of kilometers. To get an idea of ​​fuel and electricity consumption, we will therefore wait for a longer test. Electric autonomy of 63 km seems more or less realistic on the road, but we were surprised by the operation of the Comfort driving mode (which corresponds to Hybrid among rivals) since, even with the battery full, the thermal engine is used at low speed, whereas the models competitors generally prioritize running on battery power in these conditions. Fortunately, there is the EV mode, but it’s a shame to have to select it each time the battery is at maximum.

Despite its generous size and its long hood, the CX-60 is easy to navigate around town. However, it is not without some discomfort due to the overly harsh reactions of the suspension. Do not expect to improve the feeling with controlled damping or air suspension, as found in the world of premium SUVs. There are none here. As a misfortune never comes alone, we also regret the sticky steering at low speed. There are areas for improvement before commercialization.

On the road, the CX-60 reveals another face. Suspension comfort is still not the strong point, but the firmness of the chassis serves a good control of body movements when you hurry. With its chassis which rests on double wishbone suspensions at the front and multi-links at the rear, the Japanese SUV is reassuring and faithful to the requested trajectory. It also distills a good feeling at the level of its brake pedal, without dead travel, a defect that is sometimes found in plug-in hybrids.

If the dynamism of the chassis is not that of a BMW X3, the performance is there when the two engines work together to tear the vehicle off the asphalt (0 to 100 km/h in 5.9 s) and relaunch the two tons with vigor. Here again, it will take additional tuning to avoid a few jerks that we felt coming from the automatic gearbox and to annihilate an unpleasant transmission noise under strong acceleration.

By taking over the multimedia system of the CX-5 without any real improvement, the CX-60 inherits the same faults. Want to drive without the head-up display in the windshield? It will have to be deactivated at each start by looking in the menus. Want to modulate the battery regeneration strength? Here we go again to delve into the menus. You want to change radio station via voice command? Forget. The Japanese SUV has not switched to smart control which is spreading in premium models. The observation is severe but, when one claims to join a club (in this case, that of the premiums), one must at least suggest similar solutions.

Fortunately, the vehicle makes up for it on other points such as the physical keys which facilitate the use of many functions, the solid appearance of its furniture and the space on board. In the back, two passengers have good legroom and headroom, as well as a comfortable posture. Without breaking records, the trunk shows an interesting volume of 477 l (570 l with the space under the floor). It also benefits from good modularity thanks to the 40-20-40 folding bench seatbacks, which are operated from the rear.

Mazda wants to get into the premium club, but the CX-60 isn’t as fun to drive as a 367bhp Audi Q5 55 TFSI and not as dynamic as a 30e BMW X3 xDrive. For its part, the Volvo XC60 has nothing to fear from the arrival of the Japanese in terms of on-board performance and electric range (91 km now for the XC60 T6). Even the new Lexus NX 450h+ features a neater interior, a more modern multimedia system and proven efficiency.

Find the results of the test and the technical data sheet on the next page.
Tags: CX60hybridMazdapluginPremiumsightsTest

Generalization of Covid-19 tests at airports: “A little extra, but a false security”