Flu: a million people have seen a doctor

In 5 weeks, more than a million people have seen a doctor for the flu, and 86 have died. An excess mortality of 18% is estimated for early January. 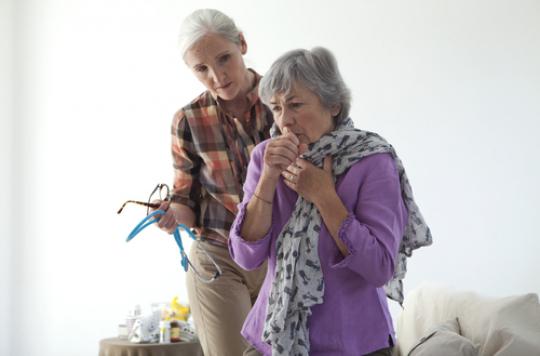 France continues to cough, sneeze and complain of body aches. Over the past week, 266,000 new cases of influenza were reported to the Sentinels Network, charged its surveillance. In 5 weeks, more than a million people saw a doctor for flu-like illness and 86 people died from it.

In recent days, the incidence rate has reached 409 consultations in town medicine per 100,000 inhabitants against 395 in the 1time week of january. The Provence-Alpes-Côte d’Azur region, Corsica and Occitania are the most affected. In Brittany, Ile-de-France, Grand-Est and Nouvelle-Aquitaine, influenza activity tends to stabilize, while it decreases in Auvergne-Rhône-Alpes.

The peak is coming

Thus, the epidemic peak has not yet been crossed at the national level. According to Sentinels, this one is close but it is still impossible to predict with precision its occurrence. “By way of comparison, during the previous A (H3N2) virus epidemic in 2014/2015, the incidence exceeded 800 cases per 100,000 inhabitants at the time of the epidemic peak”, notes the surveillance network.

At the same time, hospitalizations also continued to climb. These stays mainly concern the elderly: 13% of hospitalized people are between 65 and 79 years old and 64% are over 80 years old.

In addition since the 1er November, 796 serious cases were reported. Among them, 68 were admitted to intensive care last week. An admission number which has been decreasing since the beginning of January, underlines Public Health France. The majority of these patients had risk factors and at least 46% were not vaccinated. The agency also says 86 people have died. Three-quarters of them were over 65 years old.

The first analysis of all-cause mortality shows a marked increase over the past 2 weeks, especially among the elderly. “At the national level, the observed number of deaths of all ages is greater than the expected number of at least + 18% over week 52 (from December 26 to January 1, 2017)”, reports Public Health France. For now, it is still impossible to attribute this excess mortality solely to the flu. Indeed, it is still difficult to estimate the mortality due to influenza.

However, everyone has in mind the slaughter of the 2014-2015 epidemic. That winter, nearly 3 million French people had been infected with the A / H3N2 virus, the strain currently circulating. A large-scale epidemic which would have led to a record excess mortality of 18,300 deaths in France.

Flu: people at risk should get vaccinated

This year the flu virus is easily transmitted