Electronic flights. How to guard against this scourge? 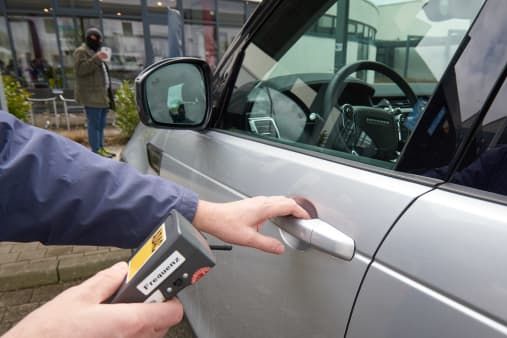 The so-called “relay” attack is one of the most formidable and most used by criminals.

By stealing a car discreetly and in record time, keyless entry and start systems leave you very vulnerable to thieves. But a few sometimes simple precautions can still limit the risk of ending up on foot.

In the automotive industry, electronics are not always your friend. In addition to sometimes being the cause of expensive breakdowns, it can also be the business of criminals. Keyless access and start systems, which are very popular today, are indeed rarely very secure. Malicious people know how to exploit their flaws to steal your vehicle without breaking in, often in no time. According to Coyote, 88% of the 122,700 flights recorded in France in 2021 were carried out using technology or electronically!

The so-called “relay” attack is one of the most used. It consists of using a device to intercept and amplify the signal emitted regularly by your remote control, in order to transmit it to an accomplice located a little further away, with a second device in hand. This signal can then be used to unlock your car, since the on-board electronics will incorrectly interpret it as the presence of the key nearby.

According to the German automobile club ADAC, only 5% of vehicles on the market today are well protected against this scourge. The chances that your model is in this case are therefore unfortunately low. Especially since French cars, the most popular with us, are clearly not among the best students. A criminal network specializing in thefts of DS 7 Crossback, Peugeot 3008 or 5008 has also been the subject of a police raid recently in the Paris region, in the Yvelines. But if you can’t count on the manufacturers, you can put in place a few countermeasures to reduce the risks.

“We often put the keys in the entrance of the house, but it is better to avoid putting them there, explains Benoît Leclair, general manager of Argos, a benchmark insurance organization on the subject. “

“You can also leave them in a small aluminum box, then it will be impossible to copy the signal”. However, beware of the so-called Faraday pouches that you can buy on many sites: Thatcham, created to reduce insurance costs in the United Kingdom, encourages testing their effectiveness before relying on them. The opinions of Internet users can prevent you from buying them for nothing. As for the idea of ​​simply putting aluminum foil around the key, it would be totally ineffective according to the ADAC.

If these tips can prevent you from finding yourself without a vehicle in the morning when you wake up, they unfortunately do not protect you from a relay attack in broad daylight.

“In this case, according to Benoît Leclair, “what remains effective is the anti-theft cane: it is not inviolable, but the thieves will go as fast as possible”. “

Some of these devices, which might seem obsolete at first, are even capable of locking both the steering wheel and the pedals. But it’s often the mere sight of them that’s enough to put thieves back, for whom every second lost is an additional risk of being caught. The choice of a sufficiently secure car park, with a barrier at the entrance, or even a security guard, can also put a brake on the less audacious offenders. Finally, you can also consider deactivating hands-free access on many cars… provided you agree to lose the advantages of this equipment, which is still practical to use and often billed as an option.

TO READ. Electronic theft: only 5% of keys are well protected

As you will have understood, there is therefore unfortunately no miracle solution today. Fortunately, some models already offer more effective protection than others. In some cases, this involves integrating a timer into the key. It thus ceases to emit a signal after some immobilization time, for example when you arrive at the house. Other manufacturers have instead opted for ultra-wideband radio waves, which are much more complicated to hack than current analog waves. ADAC and Thatcham have both tested the vulnerability of dozens of models, which can guide your choice. As for Argos, it relies heavily on geolocation. If this technology does not prevent theft, it would indeed make it possible to recover the car in almost 80% of cases. For the time being, this still often requires the addition of a box with a subscription, such as those offered by Coyote. A solution found only in 500,000 vehicles only, out of a fleet of 40 million vehicles in France. But on an ever-increasing number of models, there is now a communication point that allows GPS coordinates to be sent without having to add anything. In order for the police to use this data, however, the owner will also have to give his consent in the menus of the multimedia system.

What are the 32 countries where electronic cigarettes are banned?

The electronic cigarette, a real danger for children

Concussions: a mouth guard capable of detecting them in athletes

General practitioners are reluctant to be on call

The electronic cigarette, more harmful for the nose than the classic cigarette?

Alcohol, a global scourge responsible for 3 million deaths in 2016