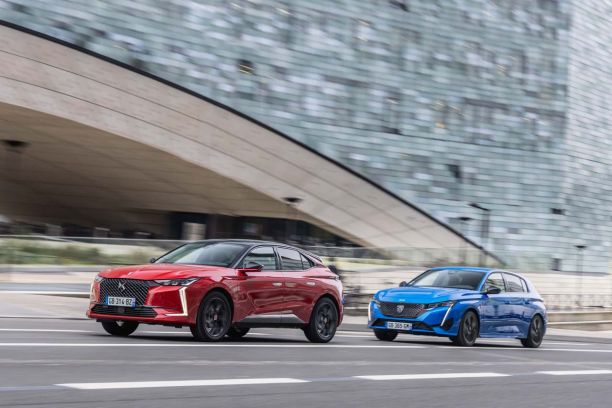 The new DS 4, on the left, faces the latest Peugeot 308, on the right. A fratricidal comparative test for the compact cars of the former PSA group which has become Stellantis.

Just before the gong of the year 2022, DS 4 and Peugeot 308 changed generation. This is the opportunity to oppose them and see which compact from the Stellantis group has best exploited the advanced EMP2 technical platform. First game in the 130 hp petrol version, with a small displacement but at a high price.

When the new Peugeot 308 GT Pack comes standard with a semi-autonomous driving system, Matrix LED lights, high-resolution 360° cameras or massaging seats, what remains to the last DS 4, supposed to embody the highest step of French luxury? Other singularities of course! The DS is thus the only one to walk around with its flush handles, which unfold as the key holder approaches. It also retains the famous DS Active Scan controlled suspension (a camera reads the road to anticipate bumps), the night vision system (infrared optics detect pedestrians before the human eye), the head-up display (projected on the windscreen, as on board the premium models), the ventilated front seats or the hands-free motorized tailgate.

The DS finally boasts of its German manufacture (it is assembled in Rüsselsheim when the Peugeot remains faithful to the French chains of Sochaux), but our two first cousins ​​do share the same platform and certain engines. To compare them, we did not retain their very expensive 225 hp rechargeable hybrid version, nor their 130 hp diesel, shunned by individuals, but their other common engine: the small 1.2 PureTech 130 with automatic gearbox. Indeed, the DS 4 does not lower itself to the PureTech 110 and 130 BVM, and the 308 does not climb to the 1.6 PureTech 180 and 225. It is also not worse to contain the prices, already intimidating for three-cylinder compacts…

In order to better respond to the onslaught of its chic cousin, the Peugeot 308 PureTech 130 comes in a high GT Pack finish displayed at €35,250. To justify this price, it automatically includes the endowment mentioned in the introduction and coats its seats with a beautiful fabric, imitation leather and Alcantara covering. Only options available? The leather upholstery at €1,700, the sunroof at €1,100 and the heated windscreen at €200, which the DS 4 charges double (€400). A first clue to its price positioning, pompously modeled on the German competition named Audi, BMW and Mercedes.

In Performance Line + level, the DS 4 PureTech 130 is thus displayed at €38,000, i.e. 2,750 € more than the 308 despite an ultimately lower endowment. Heated and massaging front seats, 360° parking cameras, reverse traffic radar, lane keeping, inductive smartphone charging, premium sound system, all are charged extra at DS and carry the real gap of priced at more than €7,000 in favor of the 308. The latter certainly does without a head-up display and embeds less advanced equipment, such as the Focal audio system at 10 HP instead of 14 (see comparative table on next page), but this price gap will still force the DS 4 to show real superiority in use.

Unsurprisingly, the 308 PureTech 130 will remain the favorite of driving enthusiasts. Its suspension better contains body roll, and its seats better maintain the body when cornering. The small steering wheel is always used for agility, in town as on winding roads, where the 308 clears the curves with a slight hoop (with less authoritative ESP anti-skid, that would be perfect!). To this “sports car” temperament, the DS 4 opposes an effect… flying carpet. The optional DS Active Scan suspension seems to hover over everything in its path beyond 50 km/h and further filter the sensations, also mitigated by less direct steering, more ample body movements and a slightly elevated driving position.

Certainly a little firmer on certain deformations, the 308 is however not an uncomfortable compact. It even takes control of more unexpected points, especially on long journeys. Supplied as standard with Peugeot and optional with DS, the queuing positioning system is initially more effective than the simple lane departure correction, to be deactivated at start-up on both models (on a tortuous road, it generates annoying reactions in the steering wheel when approaching a bend).

The Peugeot 308 also appeared more sober during our hilly motorway journey, with a consumption of 8.2 l per 100 km on the on-board computer, or half a liter less than the DS at 130 km/h. At this pace, finally, the 308 was curiously quieter thanks to better control of wind noise in the rear-view mirrors. Our DS 4 test however had the optional laminated side glazing at 250 €, delivered as standard in 308. Like what…

Quite different to drive, the latest compact cars from the Stellantis group extend their gaps to the test of everyday life. In DS 4, the front passengers sit facing a massive dashboard blowing hot (omnipresent Alcantara, “invisible” ventilation grilles) and cold (only 7-inch digital instrumentation, very dark atmosphere). The central 10-inch screen is identical to that of the 308, but it accommodates a small additional touchpad between the seats which contributes to the high-end atmosphere.

While it allows you to call up or configure six functions as a shortcut (ambient temperature or favorite radio station, for example), its interest ends there since it requires you to use the classic screen to continue browsing in The menus. Moreover, it remains very imprecise when it comes to enlarging or reducing the GPS map, or to recognize a character drawn on the index (reward offered to anyone who manages to record an E!). Ergonomics also suffers from curiously positioned controls, such as door handles that are too low or window lift controls that are too high. Here, design clearly took precedence over ergonomics.

Change of scenery on board a 308 with much sharper interior lines. A few details betray the lower range level (no carpeting in the door bins, sun visors not wrapped in fabric), but the whole still gives off a good impression of quality, served by the aluminum-style inserts and the multiple colored stitching of the GT Pack level. Freed from the famous touchpad between the seats, the interface of the infotainment system is finally easier to use since the six customizable shortcuts take place directly under the screen, itself located closer to the driver.

As in DS 4, it is better to take the time to configure your home pages and shortcuts to avoid taking your eyes off the road too much while driving because the ventilation remains deprived of physical controls (except for air recycling) and the annoying lane departure correction requires four presses to turn off. The storage, numerous, spacious and a bit more accessible, does not however compensate for the eternal debate around the i-Cockpit. If the 3D effect counters and multiple displays exude modernity, they remain hidden by the top of the steering wheel in certain driving positions. The problem will not affect everyone: only those who drive with the seat at the lowest and the rudder at the highest.

Let’s stick with 308 to discuss its rear space, which has improved slightly since the previous generation. but still far from equaling the references of the segment, Seat Leon and Volkswagen Golf in the lead. Access on board and legroom are therefore not very generous, while the design of the bench seat does not guarantee a restful position on a long journey with its vertical backrest and its somewhat short and firm seat. Unfortunately, the DS 4 imitates it on this point as well as in terms of loading.

Despite their good carrying capacity (412 l for the 308, 430 l for the DS4), the two cousins ​​show the same shortcomings in terms of modularity by refusing the double floor, which is so practical. Here, there is no flat loading area with folded backs, or lower storage to wedge small objects. Unlike the 308, the DS 4 benefits from a partially covered aluminum sill. Too bad it is perched even 5 cm higher. Families will do better to tick the 308 SW at Peugeot and the… DS 7 Crossback at DS, the DS 4 not having a break version. Not premium enough, no doubt!

Find the results of the DS4 vs 308 match and the prices, equipment and technical sheets compared on the next page…