Citroen U55 Cityrama. The restoration of the tourist bus launched 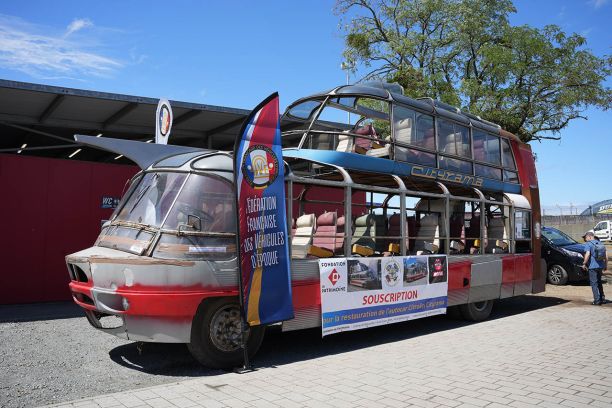 The Citroën Cityrama was exhibited at Le Mans Classic 2022.

The Citroën U55 Cityrama, a true jewel of French know-how in bodywork, is going to be restored. The only remaining copy out of 3 manufactured, this tourist coach will require 4 years of work. The Association Normande d’Anciens Utilitaires in charge of the project is appealing for donations.

Here is a treasure from the past that has turned heads many times and even made a remarkable appearance in the cinema in the late 1950s. The only remaining copy of a Citroën U55 Cityrama coach is about to undergo a complete restoration. An exceptional vehicle which testifies to the French know-how of the time in terms of bodywork and which today has even aroused the interest of the Heritage Foundation.

Only one copy left

Ten years after the Second World War, it is time for reconstruction and tourism is developing in France. In order to make the activity even more attractive, the director of the Cityrama company, Jean-Pierre Dubreuil, called on the oldest coachbuilder in Paris, Currus, to create an exceptional bus. Thus in 1956, a double-decker bus with a gigantic glazed surface was born. It has nothing to do with the Citroën U55 from which it takes over the chassis. Its futuristic lines, very fashionable at the time, were even inspired by fly boats. Its panoramic roof was removable to enjoy the great outdoors in summer. The bus – almost 4.35 m high – could accommodate 50 passengers and offered audio guides in eight different languages. Only three copies of the Citroën U55 Cityrama were produced and only one from 1959 has survived. Until the end of the 1970s, tourists were able to discover the capital through the large windows of this four-wheeled rocket.

Restoration of the last copy

The owner of the Citroën Cityrama is the kind of passionate collector who would need several lives to restore all his vehicles to the rules of the art. Close to the Association Normande d’Anciens Utilitaires (ANAU), they had been discussing a restoration project for this tourist bus for years. The work is substantial and therefore requires a lot of money, around €400,000. The restoration of the machine is supported by the Heritage Foundation. The latter launched a call for donations on its website. Essential aid for the ANAU, which cannot meet all the expenses. Of the €50,000 in the first tier, more than €18,000 have already been raised at the time of writing these lines.

Such a piece deserves time…. The restoration of the bus was entrusted to the Normandy Classics workshop located in Granville, in Manche (50). Contacted by us, Philippe Debasly, owner of the garage, explains that it will take four years, or approximately 2,000 hours, for four people to restore the Cityrama coach to its former glory. ” This is a project close to my heart […] I am crazy about Citroën and utility “. Being a unique copy, each step will be crucial. The first is to completely dismantle the vehicle.

You have to be patient and rigorous because the smallest part will have to be listed. Philippe Debasly would like this first phase to be carried out with all the restorers so that everyone can assess the extent of the work to be done, particularly with regard to the bodywork. Especially since the Citroën bus has already undergone a restoration but which never succeeded. It will then be necessary to sand the carcass, and to rebuild identically the parts which have been corroded by rust. At the end of this part, the body work can begin, then the repair of the mechanics (still gleaming at present) and finally the interior can be renovated.

Citroen C4X (2022). Inside the raised compact with trunk

Citroën Ami Buggy, Alpine A110… These limited editions are snapping up

Citroën C5 Aircross test: our opinion on the restyled version

A large Toyota van, cousin of the Citroën Jumper and Peugeot Boxer