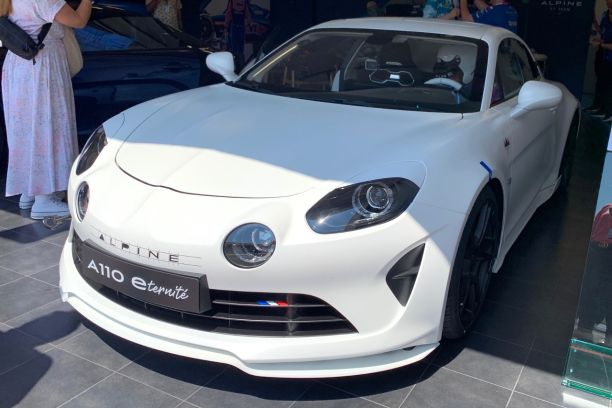 L’argus introduces you to the Alpine A110 E-ternité electric prototype.

On the occasion of the French F1 GP, Alpine unveiled a new A110 prototype with a sunroof and 100% electric motorization. It develops 178 kW (around 242 hp) and is powered by the Mégane E-Tech’s 60 kWh battery. The coupe would be able to travel 420 km. Discovery.

By 2024, Alpine will change era. The manufacturer will only offer 100% electric cars. Three models have been announced: a crossover, a city car and a sports car, developed jointly with Lotus. A fourth model has just been added to the product plan. It is the A110 E-ternité, a “zero exhaust emission” berlinetta prototype developed to celebrate the 60th anniversary of the model. But this coupe has another special feature: a sunroof. The argus was able to approach this rolling laboratory in preview.

An electric A110 with batteries from Mégane E-Tech

To develop its 100% electric A110, the manufacturer used the basis of an A110 Coupé ” destined for scrap » explains Philippe Varet, Alpine’s pre-project and innovation manager. For the engineers, who have been working on the project for a year, the challenge was daunting. It was necessary to preserve what makes the very DNA of the model: its agility, its balance, its performance. To solve this equation and realize its prototype in a “ realistic budget “Specifies Alpine, the manufacturer went to dip into Renault’s bank of organs and technologies. The electric berlinetta is thus equipped with the 60 kWh battery of a prototype Mégane E-Tech, also doomed to destruction. But, if the SUV houses its modules in its floor, it is impossible for the Alpine to do the same.

In order to obtain an optimal weight distribution (42/58 between the front and the rear, against 43/57 of origin), the twelve battery modules have been “ boned” to fit into casings (structural envelope) perfectly adapted to the internal (and reduced) architecture of the vehicle. A real tour de force according to Philippe Varet. QFour modules were placed at the front of the vehicle and eight at the rear. “ The engineers allowed themselves to position these modules in a non-traditional way “, details the manufacturer. The battery assembly weighs 392 kg. But, thanks to the reduced weight of the electric motor of 178 kW (approx. 242 hp/300 Nm), the total mass has increased by only 258 kg. The A110 E-ternity claims 1 378 kg on the scale. The suspension has been adapted accordingly and in particular reinforced at the rear.

According to Alpine, the A110 E-ternité would require only 4.5 s to reach 100 km/h against 4.4 s for a classic A110 (4.2 s for an A110 S). The 1,000 m standing start is also close to the values ​​of the model that we know with a time of 23.7 s (22.8 s for the A110/22.4 s for the A110 S). To obtain these values, Alpine has developed a new gearbox with Getrag, which already provides it with that of the thermal berlinetta. ” No gearbox available internally allowed Alpine engineers to meet the specifications of this A110 E-ternité », explains the manufacturer, in particular because the A110 is the only vehicle in the group to contain its entire powertrain in its rear part. This automatic transmission has two gears and works with a double clutch. Interest of this innovation? ” Given that the engine is limited in power (178 kW), this gearbox was developed to be able to achieve 0 to 100 km/h in the same time as the thermal version, but also to optimize the maximum speed. The second gear allows you to reach 250 km/h explains the head of Alpine’s pre-projects and innovations.

A partially convertible Alpine A110

Not content with transforming an Alpine A110 into an electric car, the brand’s teams have also made the E-ternité an open-air berlinetta. Two removable carbon fiber roof panels take place in the center of the roof, a configuration that allows to retain much of the original rigidity of the car. The white coupe got a body kit including additional skirts and headlight lids.

Still on the bodywork, a second example of this “rolling laboratory”, recognizable by its blue colour, is equipped with flax fiber panels. This material, which is more respectful of the environment and which constitutes an alternative to carbon fibre, is increasingly being tested in the automobile industry. Porsche, Alpine’s designated rival, notably teamed up its 718 Cayman GT4 RS Clubsport.

The transition from this A110 to electric gave Alpine the idea of ​​reviewing its equipment somewhat. The multimedia system is based on an independent tablet to be installed on the central console, and an audio device with a “surround” effect is inaugurated. The name of the model comes from a sentence pronounced by Luca de Meo shortly after his arrival at the head of Renault. ” I want to electrify Alpine to inscribe it in eternity”, he said. This quote appears on a plate affixed to the center console of the white sports car. Presented on the Paul-Ricard circuit ahead of the French Grand Prix after four months of testing and seven months of development, the A110 E-ternité is therefore much more than an exercise in style. It foreshadows the solutions that will soon be found on board standard electric Alpines. But, according to Philippe Varet, this mobile laboratory is not destined to lead to a production model. The argus will not fail to question Laurent Rossi, the CEO of Alpine, on this subject. To be continued then…

TO READ. Alpine. The electric GT crossover will be made in Dieppe, it’s official

Weaning: a prototype bracelet that “suppresses” the craving for alcohol