A decree published this summer replaces blood screening for narcotics with saliva screening. The question of the reliability of this procedure arises. 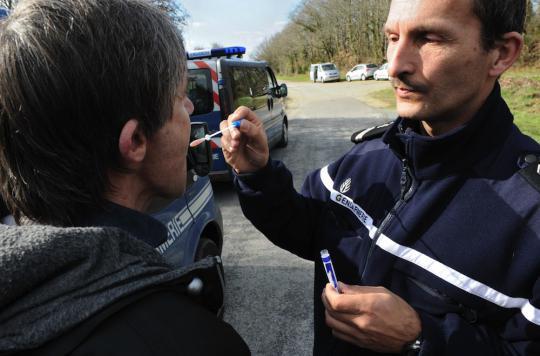 Drug users will have to be extra careful: the conditions for drug screening on the roads have been considerably tightened. One decree published on August 26 specifies that in the event of positive saliva screening for illicit substances (cannabis, cocaine, amphetamines, etc.), the blood sample will be replaced by a second saliva sample.

Easier for the police

With this decree, the authorities granted a request made by the law enforcement authorities. Indeed, before this text, the terms of which must be specified by the end of the year by decree, drivers who tested positive had to go immediately to a medical center in order to take a blood sample, accompanied by the police.

A time-consuming and somewhat complicated process, especially if the arrest occurs in the middle of the night on a country road. Except that so far, saliva tests were not reliable enough to stick to them. For several years and the improvement of biological techniques, experiments have been carried out across France with improved devices, leading to satisfactory results. As a result, the authorities have taken the plunge, even if this raises several questions.

Starting with the reliability of the procedure. Even if the tests are safe, wasn’t the use of blood samples supposed to give credibility to the results? “In fact, there is confusion on this subject”, explains the psychiatrist Jean-Michel Delile, director general of the CEID (Committee for Study and Information on Drugs).

“THC (tetrahydrocannabinol, the active ingredient in cannabis) is a substance that works in complex ways. It is fat-soluble: it is attracted by fatty substances, binds to fatty cells, especially those of the brain. Just after pulling on a joint, we see a blood peak in the consumer, but a few minutes later, the level drops sharply in the blood to increase in the brain”.

In fact, a user who has just smoked will have very low levels of THC in their blood. Unlike alcohol, there is no proportional relationship between blood levels and the known side effects – impaired cognitive abilities and responsiveness.

“We receive people who are surprised to have been arrested, when they had very low levels of THC in the blood… But in fact, blood samples do not provide information on the intensity of consumption. Alone, they do not make it possible to characterize the imputability of cannabis in an accident, for example”. These tests were mainly intended to confirm the presence of the substance in the body, when saliva tests could give rise to false positives.

A risk of stigma?

Which no longer seems to be the case. However, another question emerges, when we know that these saliva tests are capable of detecting consumption that dates back more than 12 hours… The risk of over-sanctioning and stigmatizing sober consumers on the road is emerging.

“Not really, objects Jean-Michel Delile. Precisely because of this cerebral fixation, the effect of cannabis is much longer lasting than that of alcohol, even for small consumptions. In terms of cognitive impairment and reactivity, psycho-behavioral studies show that there are effects even seven hours after taking it”. And this, even if the consumer does not feel “stoned”…

In the end, this new procedure will at least have the merit of drawing users’ attention to the risks they take on the road, when they think they are in compliance with the law. Indeed, the legislation now makes it possible to carry out “a priori” checks on drivers – that is, without any reason to suspect consumption. Hence the need to be well advised.

“For alcohol, this approach has really made it possible to obtain positive results,” emphasizes Jean-Michel Delile. Cannabis users are not marginalized! I see workers who realize the extent of the risks they take, especially for civil servants, if they get caught during a traffic check. As a result, some want to quit for this reason. Seen in this light, therefore, this evolution of roadside screening can be a good way of mobilizing consumers”. Provided, indeed, that the texts do not serve the cause of all-repressive, but only aim to limit road accidents related to narcotics, and to empower populations.

Cannabis is more harmful to the lungs than tobacco

Cough syrups produced in India: after the WHO, the Gambian police open an investigation

Cannabis: how long do the effects really last?

12 questions about the new drug for obesity

Road safety: to avoid falling asleep at the wheel, listen to music!

Alzheimer’s: a new drug that rids the brain of toxic proteins