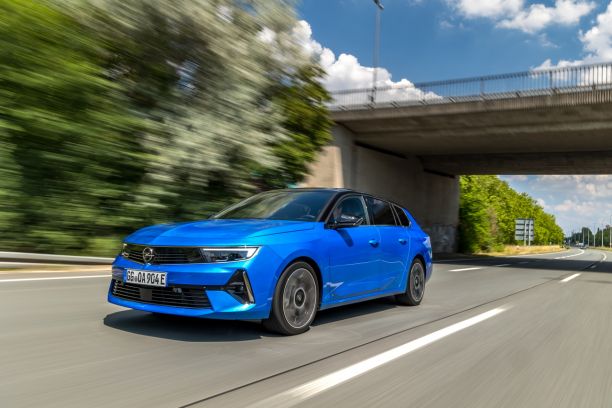 Here is the first test of the new Opel Astra Break. You will have to be patient to take the wheel because orders will not begin until October 2022. Deliveries will take place in the first quarter of 2023.

The new Opel Astra is entitled, like its ancestors, to its station wagon version called Sports Tourer. Despite the innards of Peugeot 308 SW, starting with its 180 hp hybrid engine, it reveals a personality of its own and a very assertive style.

Since 1953, Opel has been manufacturing station wagons that have long responded to the pretty name of Caravan. The first in the compact category, the Kadett Caravan, was born in 1963. From then on, all Kadett and then Astra opuses were available in station wagons, a very important body in its national market, Germany. But today Opel is no longer frankly German because the manufacturer is sailing in the Stellantis galaxy. However, according to its parents, this new Opel Astra has very Germanic features. It is also manufactured in the historic factory in Rüsselsheim (Germany), where the DS 4 tricolor is also assembled.

Since then, water has flowed under the bridges and Opel has become a true generalist brand as there are not many left on the market. The vast majority of manufacturers wanting to really move upmarket in order to establish their image and generate more profits. So, in the Stellantis universe, this Astra Sports Tourer had to be different from its cousin the Peugeot 308 SW. For many years, the Rhine-Main firm has been distinguished by well-adjusted prices in the face of competition, often 10 to 15% lower. Despite recent technologies from the organ bank of the Franco-Italian group (PSA-FCA), this 4.64 m long break (4.37 m for the sedan) is trading a few euros less than its rivals ( see the “Competition” chapter).

The Astra break takes up the finishes and engines of the sedan (110-130 hp petrol, 130 hp diesel and 180 hp plug-in hybrid). The prices have not yet been revealed, but they would be €1,200 higher than those of the sedan. The 180 hp plug-in hybrid version would therefore start at €36,450 and peak at €45,000 in the Ultimate high finish, that of our test model. The bill is high in Ultimate but everything comes as standard, or almost, with semi-autonomous driving, rear cross traffic alert, head-up display, full LED adaptive lights, sunroof and even Alcantara upholstery. “leather effect”. The 7.4 kW on-board charger, instead of 3 kW, is still optional at €400, while the cable for Wallbox (7.4 kW, 32 A) costs €249.

It is on this point that the absorption of the German firm by Peugeot has done the brand the most good. Of course, we have to go back a few years, but it was obvious that the Opel often came last in terms of driving pleasure. In question: a road behavior not really precise, spoiled by inefficient running gear. Today, it’s hard to blame a recent Opel for a lack of dynamism and unpredictable handling.

And the Astra Sports Tourer tested here is no exception to the rule. As we wrote above, it inherits bases developed by Peugeot, a true master in the field. We therefore find a precise front axle-steering duo well helped by a rear axle that rolls the curves with fidelity. The damping does its job very well, even if we noted on this heavy hybrid version fitted with low-profile tires (225/40 R18) a tendency to firmness on small irregularities in the roadway, especially on urban routes.

On the mechanical side, without offering great thrills, the combination of the 1.6 turbo of 150 hp with a 110 kW electric machine revealing a cumulative power of 180 hp and 360 Nm of torque offers more than enough performance to overtake in complete safety. The set even allows you to drive at full speed without being released from the left lane of a free-speed portion of the German motorway, where we were able to try this Astra a little. Whether the engine-gearbox assembly reacts well, we were treated to a few transmission jerks, quite light, during the transition between electric and thermal. Finally, despite the very high heat requiring us to drive almost always with air conditioning pushed to the maximum, we were able to complete 43 km in all-electric mode without exceeding the 120 km/h speedometer. In the end, on the small test loop, the on-board computer reported an average consumption of 7.2 l/100 km.

Where, in our opinion, Stellantis acts better than the Volkswagen group, it is on the differentiation of the models. If the exterior line of the Astra has nothing to do with that of a Peugeot 308 SW, I find it more elegant (but this is a very personal opinion). Same observation for the cabin. Admittedly, there are many common parts such as the Commodo, the automatic transmission gear lever or the vanity mirrors dating from the end of the 1980s (like on my father’s Peugeot 405, etc.), but the architecture is really different. On this high version, the two Pure Panel screens bring a real feeling of modernity, even if their complicated ergonomics require some time to adapt. On the other hand, the quality of manufacture does not suffer from any reproach, and the driving position makes it possible to envisage long journeys without fatigue, especially thanks to the excellent EGR seats very well designed.

At the rear, if there is better compared to the sedan (traveling on board is a punishment for large sizes), it is not ecstasy either. The stretched wheelbase of 6 cm (2.73 m) makes the habitability barely acceptable. In contrast, the volume of the trunk which displays 516 l (1,553 l once the rear seatbacks have been folded down) allows a family of five to go on vacation while carrying some of the superfluous. The 100% thermal versions do better, with a range of 597 to 1,634 l. Mention very well to the rear seat backs which fold into three parts (40/20/40); two people can travel in the back with a long central load. Good point also at the location provided for the charging cables, which thus will not go for a walk in the trunk.

It is known, the Opel have always been cheaper than their rivals. Despite the management of the brand by Stellantis, this approach remains and that’s good. If our Astra Sports Tourer Ultimate tested today is trading around 45,000 €, which is still very expensive, the equipment is very complete. Especially in the 180 hp hybrid version which starts at +/- €36,450 (Edition finish) when the equivalent costs €39,050 at Peugeot, €39,750 at Renault for a Mégane Estate E-Tech and €39,990 at Skoda for a Octavia Combi iV, it is true straddling two categories. This new version of Astra therefore remains very faithful to the commercial line of the brand by being less expensive than its main European rivals.

Displaying a strong style and real road qualities that surpass those of previous generations, this Astra Sports Tourer has the good taste of being less expensive than its plug-in hybrid rivals. If the modularity and the volume of the trunk seduce, we regret a rear habitability which remains limited and a little too complicated ergonomics.