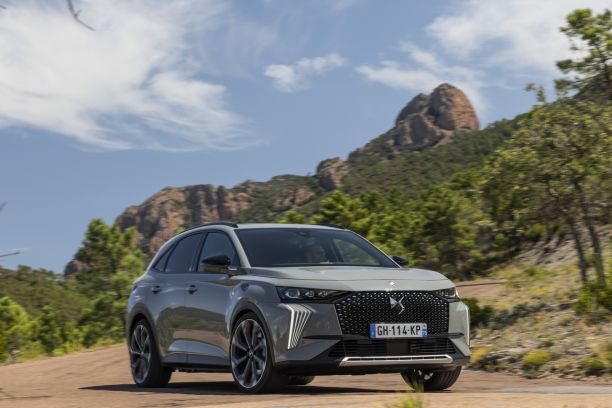 On the occasion of its 2022 restyling, the DS 7 is upping its game with a new rechargeable hybrid version with 360 hp and a more assertive look. On the driving side, it does not pretend thanks to a formidable efficient chassis.

Did you find the DS 7 a bit soft despite its 225 and 300 hp plug-in hybrid versions? U.S. too. The luxury brand was, it is true, in its role: to offer refinement and comfort to any test to break into the premium. This double promise made in 2017 at the launch of the DS 7 Crossback is renewed for the new restyled versions. These benefit from a more statutory front end sporting an enlarged grille, new Pixel LED headlamps and a ten-claw light signature. The slightly redesigned tailgate and the new graphics of the taillights also have their effect. We also note on the back the embossed DS Automobiles car the DS 7 loses the name Crossback in passing, that hardly anyone uttered.

The DS brand is not satisfied with this new cosmetic approach for its SUV, which remains its best-selling model in Europe ahead of the compact DS 4. The restyling of the DS 7 is also an opportunity to implement on the E-Tense versions a battery with improved density thanks to a new chemistry. The gross capacity of the accumulator increases to 14.3 kWh (against 13.2 kWh previously), which allows these versions to extend their electric range by a handful of kilometres. The mixed WLTP value goes from 55 to 64 km for an E-Tense 225, it’s always good to take.

The real event of the DS 7 restyling is the E-Tense 4 version x 4,360 hp, which gives it a new dimension. The powertrain is identical to that of the DS 9 360 road car, and the chassis benefits from numerous modifications as we will see later. Even before taking the wheel, this DS 7 360 shows that it is not like the others: its huge 21-inch rims, its chassis lowered by 15 mm and its wider tracks give it a much more muscular appearance. Much like the first generation Audi SQ5 did compared to the Q5.

The French premium SUV has always taken care of its running gear to offer comfort and quietness. A synthesis that makes the DS 7 a homogeneous and relaxing model to drive. Change of course for the 360 ​​hp version. This time, the DS Performance engineers have rolled up their sleeves to offer a more aggressive ride and a more GT typing. To achieve this, there are many areas for improvement. In addition to the lowered chassis and the widened tracks (+ 24 mm at the front and + 10 mm at the rear) already mentioned, note the stiffer spring rate (+ 40% at the front and + 30% at the rear), the modified anti-roll bars (softer at the front, stiffer at the rear) and more compact silent-blocks.

DS has supplemented these racing car recipes with a new definition of the controlled damping law, dynamically adjusted from the basic typing. It doesn’t take long to feel the benefits behind the wheel. To the nonchalance of the other versions, this DS 7 360 opposes a well-maintained body, a more reactive front end and a grip which allows you to go to very high speeds in bends with stunning stability. By the way, thank you to the Michelin Pilot Sport 4S which equip all these versions. We also welcome the resized braking, with discs that go to 380 mm at the front and a pedal touch that is not too disturbing, as is sometimes the case with hybrids. As a result, we take pleasure in accelerating the pace. The DS 7 360 then succeeds in making you forget that you are driving a high SUV. The GT spirit claimed by the brand for this model is therefore not usurped, and this version justifies its price difference of €5,200 compared to the E-Tense 300.

With such efficiency on the road, there is bound to be a counterpart. This version is thus a departure from the smoothness usually felt in the DS. The low-rise 245/35 R21 tires are obviously no strangers to the percussion felt as soon as the bitumen bends or the road lacks maintenance. But we will talk more about firm contact with the road than about discomfort. On the engine side, the cumulative power of 360 hp is the result of the 200 hp 1.6 turbo petrol engine and two electric motors: one of 110 hp housed in the gearbox and one of 113 hp installed on the rear axle. The latter ensures evolutions at low speed and offers all-wheel drive as soon as the grip demands it or permanently. via AWD drive mode. All this cavalry allows the DS 7 360 to push hard with a 0 to 100 km/h established in 5.6 s.

If the performance figures are flattering, the plug-in hybrid machinery does not manage to convince completely in terms of approval. It imposes a certain overweight on the DS 7, and the energy flows are not always imperceptible. The fault is a slight runaway of the gasoline engine in the reminders, with a sound that is nothing premium. Shame. But anyway DS could not develop a powerful version of the DS 7 without electrification, following its roadmap towards a 100% electric range (all its new models will be battery-powered from 2024).

You also have to see the good side of this E-Tense version. With frequent recharges (almost daily) we consume little or no gasoline, and the gross 14.3 kWh battery allows a mixed WLTP autonomy of 57 km on this version. For trips with the battery discharged (it is never completely discharged), it will still be necessary to have a light foot in order to keep consumption within acceptable proportions. Especially since with a capacity of only 43 l, the fuel tank is small to the detriment of autonomy on the highway.

On board the restyled DS 7

This powerful version does not lace up on the price side. The restyled DS 7 starts at €44,700 with the 130 hp diesel and automatically climbs to €53,900 in E-Tense 225 hp, the most requested version, while the E-Tense 4 x 4 360 hp model claims a completely different budget: count 68 €700 with the Performance Line + finish and up to €78,400 in the La Première finish, which takes the title of the most expensive French car in this high-end version. If the wallet is empty to acquire this DS 7 360, the standard equipment is full (read below).

With this 360 version, DS has risen to the top of the plug-in hybrid premium SUV segment. The closest competitor is the Audi Q5 55 TFSI e, with 367 hp and available in S line at €73,110. The latter has the advantage of being able to have an optional air suspension. The BMW X3 plays a wiser card with its xDrive 30e version (292 hp and €62,250), while the new Mercedes GLC has not yet revealed all the details of its future 400 e version of 381 hp. Finally, Lexus is to be considered with its convincing NX 450h+ of 309 hp (€74,990 in Executive), to which its imposing battery provides greater electric autonomy. Ditto at Volvo since the last update of the XC60 T6 (340 hp and 74,480 € in addition). But the footwork of the latter is not as agile as that of the French SUV.

Until now, a DS branded Performance Line was content with a sporty cosmetic. No more. This time, the DS brand is offering a really high-performance version with this E-Tense 360 ​​version with an ultra-efficient chassis. You have to accept a touch of the road that is sometimes a little rough, but nothing prohibitive on the comfort side. This DS 7 360 has above all the advantage of a real temperament which clearly distinguishes it from the tender E-Tense 225 and 300. Everyone will make their choice according to their desires… and the thickness of their wallet.

Abortion: 77% of French people are in favor of unrestricted access to abortion

What is French pastry worth?