Baby Jeep (2023). 1st official photos of the cousin of the DS3 Crossback 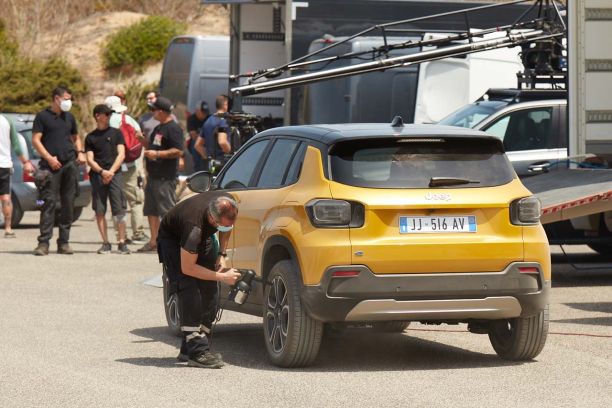 Here is the first official photo of the Renegade’s little brother.

Stellantis’ golden egg hen, Jeep once again had a prominent role in the presentation of the group’s long-term strategic plan. The first images of the brand’s future small SUV have been unveiled. A cousin of the DS3 Crossback and Opel Mokka which will also be its first electric model.

Already present in the small SUV category with its Renegade, Jeep is about to add an even more compact model to its lineup. This is one of the strong announcements made by Carlos Tavares during the conference presenting the long-term strategy of the Stellantis group, this 1er March 2022. But if you are a faithful reader of The argus, you will not be surprised. We told you about this “Baby Jeep Renegade” in March 2021. The novelty is the presentation of two official images, which confirm a style in line with the habits of the brand. The set is also not without evoking the Renegade, especially at the level of the taillights, but with lines much less cut with a sickle, Compass way. Launched at 1er quarter of 2023, this newcomer with an as yet unknown name will also be the brand’s first 100% electric model.

TO READ. Stellantis: all future models by 2023

For this, it will use the same CMP platform as its close cousins ​​DS3 Crossback and Opel Mokka. Like them, it will display a format rather below the average of the segment, with a length of approximately 4.15 m. As a reminder, the Renegade is now 4.24 m, and its successor should certainly reach at least 4.30 m, like the second generation of Peugeot 2008. But unlike the Mokka and DS3 Crossback, this city SUV will not be manufactured in France, in Poissy (78). The assembly will take place, from December 2022, in the Polish Fiat plant in Tychy, alongside the future Alfa Romeo Brennero and 500X, a little more imposing.

In addition to the 136 hp electric motor already well known to the group, the three-cylinder 1.2 Puretech will also be there, with a light hybridization. Not sure, however, that the 1.5 Blue HDi diesel still has the right of citizenship. As for the presence of all-wheel drive that would allow this “baby Renegade” to fully deserve its Jeep label, it is also far from certain. Stellantis is however working well, according to our information, on a solution involving the use of an electric motor to drive the rear wheels on this CMP platform. But it should rather be dedicated to the future Renegade planned for 2025.

Pregnancy: she is pregnant for 13 months!

A little boy with a Pinocchio nose, what is he suffering from?

Bronchiolitis: the world’s first vaccine is authorized for all infants

Microbiota: antibiotics taken during childhood could lead to complications in adulthood

Jeep Avengers (2023). The official photos of the cousin of the DS3 Crossback

Baby fever: when to go to the emergency room? How to lower it?