Alzheimer’s and other degenerative diseases: a “cleaning” protein in question?

A protein normally involved in cleaning cells could, in the event of dysfunction, clump together into fibrils and be the cause of neurodegenerative diseases such as Alzheimer’s. 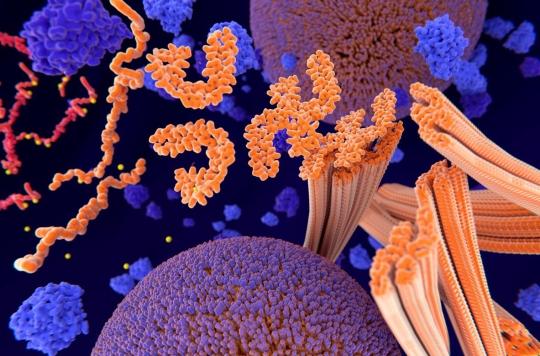 Is the TMEM106B protein, like the tau protein and amyloid plaques, involved in the development of Alzheimer’s disease, but also in that of other neurodegenerative diseases?

This is the conclusion of a new study conducted by an international team of 22 collaborators and published in the journal Cell. This TMEM106B protein normally serves to clean up molecular debris in cells. But in the event of a malfunction, it would clump together into fibrils, which would hinder the proper functioning of the cells. Each neurodegenerative disease would also have its own signature in terms of tangled proteins, as explained by Dr. Anthony Fitzpatrick, principal investigator at the Zuckerman Institute in Columbia (USA): “These disease-associated proteins have their own unique shapes and behaviors.”

Fibrils observed for the first time

Researchers have long been interested in the proteins responsible for the formation of tangles as targets for new drugs. But until now, the behavior of the TMEM106B protein in fibrils had not been observed.

TMEM106B is known to clean out waste that builds up in our cells as we age. But it can happen that the TMEM106B molecules split into fragments, which self-assemble and can form fibrils that clog the cells.

Using a high-powered microscope, the team took snapshots of protein molecules, from which they then built three-dimensional models, including those of the TMEM106B protein.

A possible new cause of neurodegenerative diseases

They then found that this protein created many fibrils and that these were not only present in the brain tissue of patients, but also that they could be the cause of neurodegenerative diseases. According to the authors, this tangle formation of TMEM106B could kill brain cells, leading to dementia, movement problems, speech pathologies and other symptoms of Alzheimer’s disease, PSP, FTLD and other brain diseases with telltale protein tangles.

“We now have a promising new lead, emphasizes Dr. Fitzpatrick. It could point to a common thread linking a series of neurodegenerative diseases and open the way to new interventions.”